In an interview with Al-Monitor, former Iraqi Prime Minister Haider al-Abadi explained that his faction's opposition to the current government is a matter of personal responsibility and that any criticism is meant to be constructive. 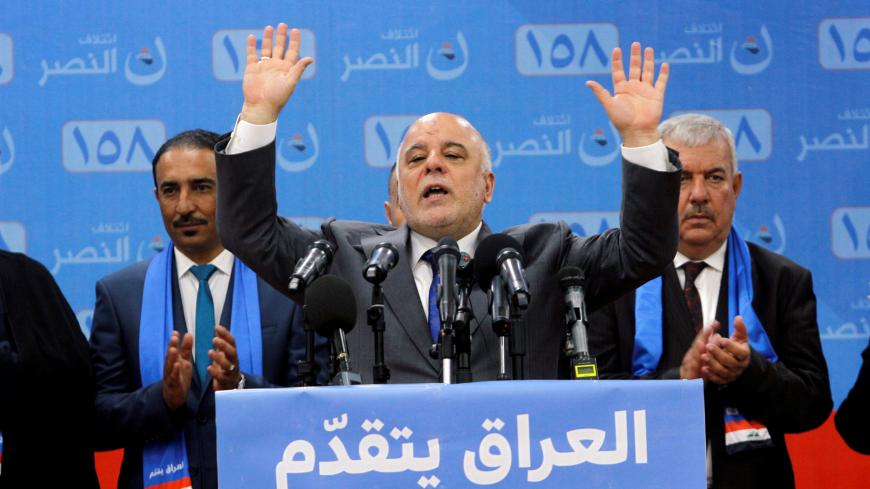 Al-Monitor’s correspondent in Iraq interviewed former Iraqi Prime Minister Haider Al-Abadi at his family residence within the Green Zone in the capital Baghdad. There, he holds meetings of the Victory Alliance and hosts guests. Abadi discussed many topics including his relationship with the Popular Mobilization Units (PMU), the government of his successor Adil Abdul Mahdi, the possibility of Iraq mediating between Washington and Tehran and Israel's targeting of the PMU. Abadi warned against damaging carefully balanced ties between the Iraqi federal government and Iraq’s Kurdistan region because of power conflicts. He also commented on the PMU accusing him of serving the intersts of the United States.

Al-Monitor: Do you have any plans to return to the prime minister's office now that there is growing opposition against Prime Minister Adel Abdul Mahdi?

Abadi: I am not meeting with political leaders and religious references to be prime minister again, although I have every right to. These are regular meetings I am conducting since I am in a leadership position, heading a political alliance. Not every meeting or visit is intended to bring me back to power, and our opposition to Abdul Mahdi’s government aims to reform its work, not bring it down.

When you occupy a certain position in your country during a certain period of time, you become responsible. If a person is keen on working, he will do it within the government or outside it. My activities fall within a political movement that has to continue in support of the political process and the improvement of governance. Serving people is not restricted to one position. Yes, I will keep doing my political work because building a government is a cumulative process.

Al-Monitor: Where is your coalition, Al-Nasr, within the current political scene? Is it a part of government or opposition? You’ve been deemed “corrective opposition.” What is meant by this?

Constructive opposition is intended to reform institutions and improve faulty procedures. It is not to weaken the government, because a weak government means a weak country. It is in our best interest to warn the government about the mistakes it makes. When I was prime minister, I was happy to listen to constructive criticism.

Al-Monitor: You began the process of integrating the PMU into Iraq’s security services and Abdul Mahdi continued it, issuing a decree July 1 that all PMU forces are to either join the armed forces or disarm. Have these efforts made progress and what remains to be done?

Abadi: This is what Abdul Mahdi’s government told us. They said they are proceeding with the merger and distancing the security forces from politics.

I used to insist with Prime Minister Abdul Mahdi on the need to implement, not just issue executive orders. In 2018, I issued internal regulations to organize the functioning of the PMU and impede any political intrusion. Abdul Mahdi supports the [process] I started during my tenure and the internal regulation of the PMU. He also has the tools to implement [the process of merging the PMU with the Iraqi internal security forces].

Al-Monitor: Will Abdul Mahdi succeed at doing that?

Abadi: This depends on him. Meanwhile, he is working to help the PMU succeed. When I was prime minister, I issued orders before parliamentary elections to separate the political work of the PMU from its military work. Whoever wanted to run for elections had to quit the PMU.

Fighters of the PMU are nationals of this country. Some politicians use the PMU for their own ends. Some fighters have told me that wages are being paid to people who are not among them. Those people are not involved in fighting, but they are taking the wages of fighters. This is extremely strange.

Al-Monitor: Why has the PMU accused you of being hostile to them, and why do you think they call you a US ally? How is your relationship with the PMU?

Abadi: A few weeks ago, when a statement was issued accusing me of working with the enemies of Iraq, I was in a meeting with the leadership of the PMU. I know who issues such statements. It is strange how in private meetings, they tell me that they have placed their hopes in me, but in the media, they say otherwise. My relationship with many of the leaders is positive, and I meet with them regularly. Yet some want to use the PMU to their own personal ends.

Al-Monitor: How would you describe such statements? What is their objective?

Abadi: They do not support the goal of a state-controlled PMU. I am concerned about political factions taking advantage of the PMU. The PMU is a governmental institution. The rumors about me emanate from a political side wanting to bring me down. This is not the first time they've done it. They did it before the elections, too.

Al-Monitor: When you were in office, did you facilitate any direct cooperation between the US and Iran? Are they cooperating today in Iraq?

Abadi: I was not a mediator in that sense. Every government has its own policies. When [Barack] Obama was president, ties between the two countries were easier, since Obama was keen on the nuclear deal. Back then, Iran viewed the US positively. No mediation could happen without the willingness of both sides to negotiate. It is difficult to communicate messages when you are not part of their disagreements or their agreements.

Abadi: Some want to implicate Iraq in new internal and external crises. Honestly, I wonder if whoever wants to implicate Iraq in such crises want a conflict with Israel. If so, they should make their case for it. I don’t believe that I would sacrifice my people in endless conflicts. Some want to benefit from the conflict. Am I obliged to indulge anyone holding a banner to fight Israel?

My message to whoever wants to drag Iraq into these conflicts is the following: It is not ethical to sacrifice others’ lives to preserve the benefits you enjoy. There are those taking advantage of people in the name of Palestine.

Al-Monitor: What is your evaluation of the Abdul Mahdi government when it comes to providing services, reconstruction and combating corruption? Where has it succeeded and where has it fallen short?

Abadi: Abdul Mahdi made a list of 40 issues to be addressed, and he said he would fight them all. But he can’t defeat corruption at one stroke. We now have a new type of corruption. Government positions are being sold, and there have been major breaches in the Iraqi government through these operations.

Abadi: Abdul Mahdi is committed to the US sanctions, and he is walking down the same path that my government announced. Iran is being dealt with accordingly, and Iraq did not violate the sanctions.

Al-Monitor: How would you assess the government’s steps to work out an agreement on revenue sharing with the Kurdistan Regional Government?

Abadi: In my government, I put an end to problems with the Iraqi Kurdistan Region, and we arranged the issue of overlapping power that were creating problems. We fixed everything according to the constitution, and the situation should be the same now. But I think that if those powers overlap again, problems will be reignited.