Under new austerity measures and budget cuts, Lebanon’s Ministry of Environment was forced to close its air monitoring stations across the country, raising the concerns of experts amid high levels of pollution. 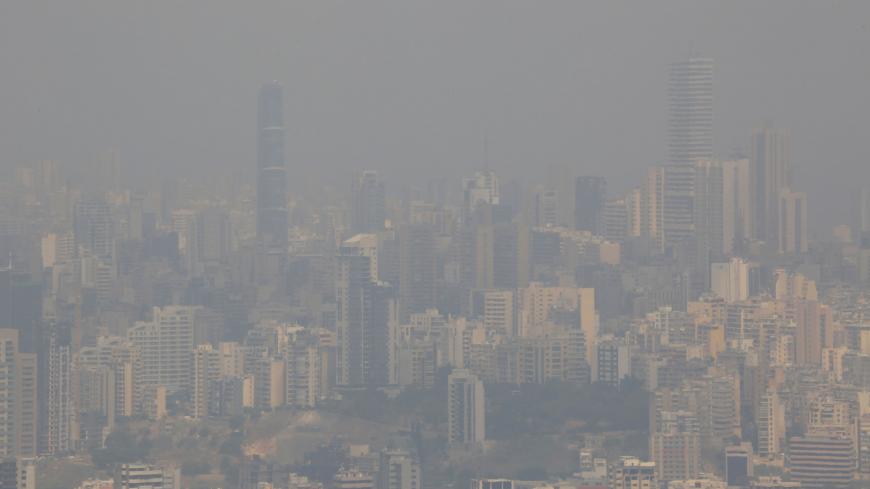 As the Lebanese government continues to discuss austerity measures, the Ministry of Environment saw its funding cut following the passing of the 2019 budget on July 20, causing air monitoring stations throughout the country to be shut down even as air pollution continues to reach dangerous levels.

The national air monitoring network, which measures pollution levels in Lebanon and allows the Ministry of Environment to regulate pollutants in the air, was established over two phases starting in 2013 with the opening of five stations after Lebanon received a $1.64 million grant from Greece, with around $400,000 of that going toward the air monitoring stations.

The second phase was launched with an EU grant of around $8.9 million and saw an additional 21 stations built in 2017 with around $1.68 million of the funding. All of these stations were connected to a central network at the Ministry of Environment and were the same type of stations used in the United States and the EU and met international standards.

Following the July 9 announcement that the monitoring stations were to be closed due to budget cuts, the delegation of the European Union to Lebanon told Al-Monitor, “The EU delegation was recently informed that the Ministry of Environment is not in a position to continue financing for the maintenance of the stations monitoring air pollution in the country. This network was partly funded by the EU as one of the main donors to environmental programs in Lebanon.”

The EU said it was regrettable that “the current budget does not allow the Ministry of Environment to maintain this network essential to monitor the implementation of the national strategy” for air quality management and called "for the allocation of adequate resources for this important issue.” The EU said the cutback is happening "after the parliament passed the law on air quality in 2018, the government subsequently adopted the national strategy for air quality management (2015-2030), and the international community assisted Lebanon to strengthen its national capacities."

UN resident coordinator Philippe Lazzarini also expressed regret that the monitoring stations were closed, while saying the UN “understands it is a result of the ministry’s inability to renew the maintenance and operation contract to upkeep these stations due to austerity and financial challenges. Securing the needed financing for the maintenance and operation of these stations is essential for the continuation of data production and monitoring to address air pollution.”

Lazzarini added, “Discussions in setting the annual budget to reduce the fiscal deficit should take into account the impact of the work of the government on people’s well-being." He cited the environment as a priority of The Lebanon We Want program, which was coordinated by the UN resident coordinator's office, the Lebanese government and civil society experts to develop goals to tackle issues such as the environment, education, poverty, health, infrastructure, the economy and the security situation and to create a better future for the country and its people.

Bassel Monzer of the Air Quality Department at the Ministry of Environment told Al-Monitor that this was the first time the ministry had to fund the maintenance for all of the stations, as it had previously only needed to fund the five from the first phase with the remaining stations having been funded through the EU. He also said the stations’ closure is only temporary if the necessary funding is received.

“Stations for air quality can only sustain a determined period without regular maintenance,” Bassel said. He said that because of a lack of a new maintenance contract, "the technicians’ advice was to shut down to prevent damages and problems." He said this is a temporary closure until new funding for maintenance is received.

He said the ministry was working to combat air pollution through efforts such as enforcing Law 78/2018, which aims to protect air quality, issuing new emissions limits that are “more stringent than before” and trying to get funding for the monitoring stations.

He said that without the stations, "We cannot be assertive about the level of pollution in the ambient air where stations are located — and of course — for the criteria pollutants.”

The closure was especially troubling for St. Joseph University professor of atmospheric chemistry Charbel Afif, who said the monitoring stations and air pollution should be a priority for the government.

“They are closed simply due to lack of funding,” Afif told Al-Monitor. “They need around $500,000 a year to maintain them to get accurate and reliable results. The Ministry of Environment has a budget of around $9 million. Having the budget cut by more than 20%, for them it’s a huge amount. However, it should be a priority for the government." He said the measurements are needed to determine how Lebanese policies are working. "We can’t do that by saying, ‘Oh yeah, it might be decreasing.’ No, we need numbers; we need to know how things are really working. With this shutdown, we have no idea now.”

Afif added that while it would be a huge step forward if the government implemented and enforced policies that pertained to limiting and preventing air pollution, there is still the need to have the monitoring stations because “we would not know what the impact is quantitatively.”

Afif said the main sources that are causing the increase in air pollution in Lebanon are traffic, power plants and various industries that release particulate matter into the air.

He said, “There are three main forms of air pollution in Lebanon on the national level: carbon monoxide, nitrogen dioxide and volatile organic compounds. The main source of these is traffic. Then we have sulfur dioxide and particulate matter. The sulfur dioxide is mainly due to power plants and the PM [particulate matter] is mainly caused by industries on the national level.”

While these are the three main causes for air pollution, private generators also have been one of the biggest polluters as they are located in residential areas and have a greater potential to create health problems for residents.

As air pollution increases, there are also increased health risks for people who breathe in the polluted air on a regular basis. This can result in minor diseases, the development of coughs and even premature deaths and cancer.

While Lebanon’s air pollution levels have not reached the dangerous levels such as those in China or India, the country is well on its way to catastrophic levels. Afif said this could happen in less than a decade. Currently, Beirut has a fine particle pollution level (PM2.5) of around 32 micrograms per cubic meter while the level in Delhi, India, is 122.

While Afif said pollution will reach catastrophic levels if nothing changes, the likelihood of it reaching the point where people need to wear masks outside such as in Beijing is slim.

He said the situation could get very bad “in seven to 10 years if we have the same amount of emissions, if we still have the power plants running on heavy fuel oil, if we still have all of the private generators inside the neighborhoods and so on. The demand on electricity is getting higher. There isn’t any public transportation and, therefore, [there] are more cars and law enforcement for industries is not very efficient.”

The economic and health costs are also proving to be steep. A World Bank study estimated that air pollution in Lebanon caused the deaths of more than 1,800 people in 2013 and a loss to society of around $2.6 billion.

This public transportation system would involve trains and, most importantly, buses that run on a schedule and have planned routes and stops rather than the informal system of buses that exists today throughout Lebanon. Under such a system, ideally not as many people would drive and instead take public transportation, which would help decrease the pollutants emitted by cars.