Are Israelis and US Jews no longer ‘brothers’?

Significant differences among Jews from Israel, the United States and France were uncovered on issues like anti-Semitism, the peace process and Russia in a recent survey. 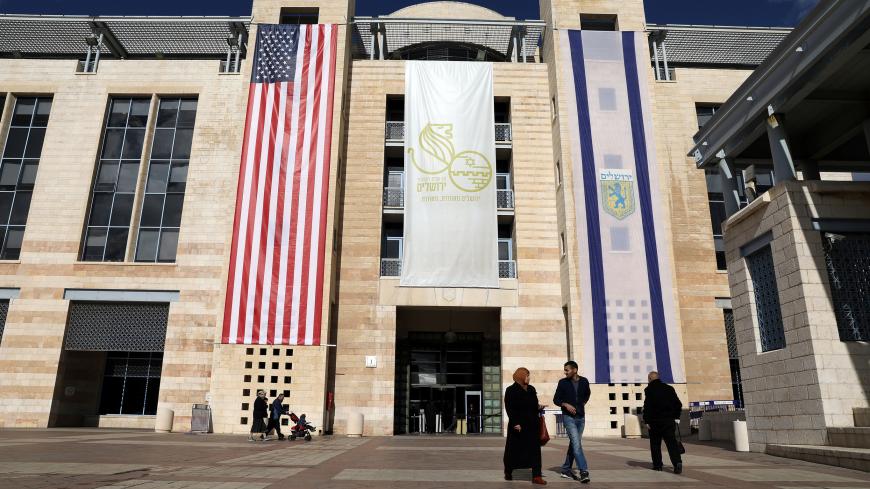 People walk at Jerusalem's city hall as the American and Israeli national flags hang on the municipality building in Jerusalem, Dec. 7, 2017. - REUTERS/Ammar Awad

A recent comprehensive survey conducted among Jews in Israel, the United States and France sought to look at how Jews in these three countries define themselves and relate to external threats. The study was conducted for the American Jewish Committee, the oldest Jewish organization in the United States, and also assessed Jewish views on anti-Semitism, the peace process and the importance of the State of Israel. A thousand Israeli Jews, 1,006 American Jews and 771 French Jews from various socioeconomic, political and religious backgrounds were surveyed.

One cluster of questions focused on Jewish identity and the connection between Israel and the diaspora. In response to the question of whether you consider Israeli/American Jews brothers, 31% of Israeli respondents said yes, while only 13% of American respondents thought so. Among French Jews and Israeli Jews there was more correspondence: 31% of French respondents said they define Israeli Jews as brothers.

Despite the sense of close family relations, 64% of Israelis are not willing to have their “brothers” from the United States influence Israeli policy on issues such as national security and the continuation of peace negotiations with the Palestinians, but 57% of American respondents support this. A significant gap was found in response to the question: "Is a prosperous State of Israel necessary or not necessary to ensure the future of the Jewish people?" While 91% of Israeli respondents answered in the positive, only 72% of American Jews and 53% of French Jews think so. The estimate is that the low response for the French stems from the relatively high percentage of Orthodox Jews among French Jewry. The survey also shows that 59% of American Jews and 35% of French respondents have never visited Israel.

In the 2019 survey, 88% of Israeli respondents support Trump’s decision recognizing Israeli annexation of the Golan Heights, compared to only 50% of Americans.

In a conversation with Al-Monitor, the director of the American Jewish Committee in Israel, Lt. Col. Avital Leibovitz, said, “American Jews need to be considered part of the national security of the State of Israel, since the pressure and influence they can exert on the American administration is enormous. This has a direct impact on decisions made in Washington.”

Leibovitz is worried that Israel might miss the significant change happening among American Jews. “Without connection to the character of the government, 10-15 years ago there were no anti-Israel or anti-Zionist groups that [US] Jews were a part of, but today there are a number of such organizations whose activities impact us. We have to be worried about the change in American Jews. We have to bring them closer to us,” Leibovitz said.

Are opinions similar among Jews regarding a world power like Russia? In Israel, which has close ties with Russia, 43% of respondents think Russia is neither a friend nor a foe of Israel; 24% think Russia is a friend; and 23% think Russia is a foe. We should note that about a million Jews from former Soviet republics and their descendants live in Israel, most of whom have family, cultural and community ties in their countries of origin.

Sixty-two percent of Israelis believe that in a decade there will be an Israeli Embassy in Saudi Arabia and a Saudi Embassy in Israel, but 43% believe that in five years the chances for peace between Israel and the Palestinians will be even lower than today. That is, in Israel, the majority believes it’s possible to advance relations with Arab states like Saudi Arabia without advancing a solution to the Israeli-Palestinian conflict. Apparently Prime Minister Benjamin Netanyahu’s visit to Oman in 2018 and the economic workshop in Bahrain on June 25 have bolstered this belief, although the Gulf states mention at every opportunity that there won’t be normalization with Israel without a solution to the conflict.

Regarding support for the two-state solution, a significant difference is present between Israeli Jews and American Jews. While only 17% of Israeli respondents “strongly support” and 22% “support to some extent” a demilitarized Palestinian state in the West Bank, 33% of Americans “strongly support” it and 31% support it “to some extent.” In addition, half of the Israelis believe Israel should not agree to vacate any West Bank settlement, compared to 28% of American Jews who think so.

Other questions in the survey dealt with anti-Semitism. American and French Jews believe that anti-Semitism is on the rise in their country. Sixty-five percent of American Jews think the safety of Jews has declined compared to last year, and 57% note that the atmosphere on campuses has become more hostile. Fifty percent of respondents in France said that the safety of Jews in France has declined. However, 60% of French Jews and 75% of American Jews believe that Jews have a future in Europe, compared to 46% of Israeli Jews who think Jews should leave Europe now.

This point corresponds to Netanyahu’s call for French Jewry to leave France after the terror attacks at Charlie Hebdo and the Jewish supermarket Hyper Cacher. European Jews responded harshly to this call. Many of the French respondents said they thought of emigrating in the last year, but the preferred destination for them is not Israel, but the United States (29%) or Canada (23%).

In conclusion, it’s natural for differences to exist between Jews who live in different countries. They are educated with different traditions and don’t experience things similarly. However, it’s impossible to ignore the rift between Israeli and American Jewry on questions of Jewish identity, the peace process, and the relationship to the State of Israel. This data is known to policymakers in Israel, who, in the meantime, shrug it off and don’t do a thing to heal the rift and reconnect to American Jewry.