Israelis lose trust in police over killing of youngster

The killing of young Solomon Tekah opened a Pandora’s box, disclosing dozens of horrible stories of racism, beatings and false arrests directed at the Ethiopian community. 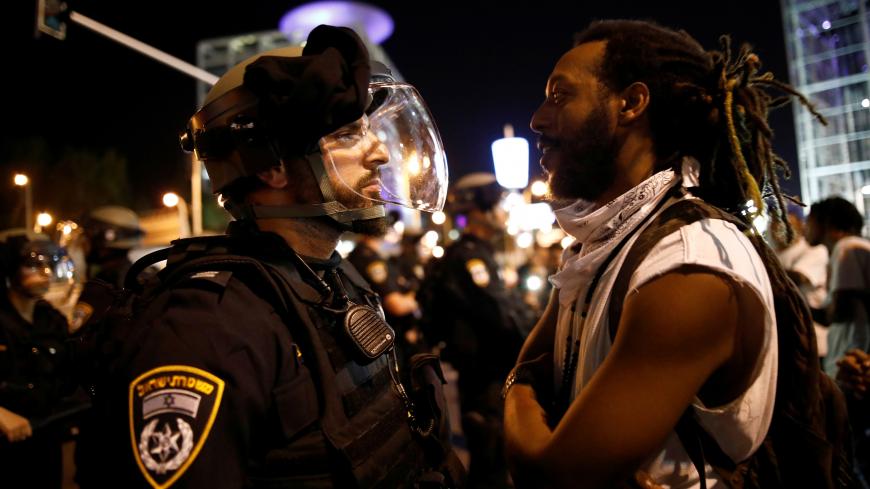 A protester stands opposite a policeman during a protest against the death of 18-year-old Solomon Tekah, who was of Ethiopian descent, after he was shot by police, Tel Aviv, Israel, July 2, 2019. - REUTERS/ Corinna Kern

The family of Solomon Tekah got up from Shiva (the seven-day period of mourning in Judaism) on July 8 and received an update from the Department of Internal Investigations about the findings of an investigation into the circumstances of Tekah's death. As a reminder, Tekah was a young Ethiopian who was shot by a police officer on June 30. The autopsy and a ballistics investigation both found that a bullet that ricocheted off the ground killed Tekah. Ostensibly, this cleared the police officer who fired the shot of any concern that he targeted Tekah directly. Still, these are not the final findings. The Tekah family has indicated it will not accept anything less than prison for the officer who fired the shot. According to Tekah’s cousin Ora Tesma, “This was a murder, not manslaughter. We will take to the streets if necessary.”

Tekah, 18, was killed on the night of June 30 in a public park in Kiryat Haim. The police officer who fired the shot said he was at the site with his family when he saw a group of young people fighting. He tried to break it up, but they started attacking him and even threw rocks at him. Feeling that his life was in danger, he pulled out his gun and fired a single shot into the ground. Tekah was killed by that shot.

The protest that erupted after Tekah’s funeral was one of the most violent Israel has ever seen. It continues to reverberate across the country and could erupt again when the investigation’s final findings are released. The protest is giving voice to a growing sense of distrust among weaker sectors of the population for the various law enforcement agencies, chief among them the police and the Department of Internal Investigations. For the Ethiopian community, these two bodies represent the institutionalized racism they face because of the color of their skin, more than anyone else. As the Ethiopian community sees it, the Department of Internal Investigations will always trample on their rights. Perhaps that is true, but even if it is not the case, feelings such as this point to an unhealthy and potentially volatile social situation.

The Department of Internal Investigations was created in 1992 as a separate department within the State Attorney’s Office, tasked with investigating crimes in which active duty police officers were involved. The idea of creating an independent body, distinct from the police, to conduct these investigations was a good one. The problem was that many of its investigators came from the police, creating potential conflicts of interests. There has been growing public criticism of the Department of Internal Investigations over the last few years, particularly among weaker communities such as Arabs and Ethiopians. They charge that numerous incidents have been whitewashed and cases involving policemen who took advantage of their position to wrong them were closed before they were investigated sufficiently.

It was Minister of Public Security Gilad Erdan who took up the problem with the Department of Internal Investigations and put it out in the open. In a July 4 interview with Army Radio, Erdan expressed empathy and understanding for the Ethiopian community’s protests and suggested that the operations of the Department of Internal Investigations be investigated, with the goal of changing the current model.

Some interpreted these remarks as veiled criticism against the State Attorney’s Office over the way it handled the Ruth David affair. David was a senior official at the Tel Aviv Prosecution Office (of the State Attorney) who got entangled in a serious criminal affair that sent shockwaves across the judicial system. The affair allegedly included divulging confidential information to suspects, receiving gifts and preventing investigations of corruption in cases involving certain people close to David. Lacking enough evidence for criminal indictment, the case against her was closed for the most part. Still, the public was left with the impression of an institutionalized cover-up. And so, the David affair significantly damaged the public trust of the State Attorney.

In any event, criticism by a senior government official is important, especially if it comes from the Minister of Public Security. And yet, even if the situation persists, it is doubtful whether anyone in the current government will push for such an investigation. What is clear, however, is that the pieces are starting to fall into place. After the Tekah incident and the violent protests that followed, the Department of Internal Investigations and the police have plenty of tough questions to answer. The killing of Tekah opened a Pandora’s box that refuses to be shut. Dozens of horrific stories of racism, beatings and false arrests directed at the Ethiopian community have been making the rounds over the last few days, both in the press and on social media. The worst of these describe violence and abuse by the police. “Shut down that tainted organization known as the Department of Internal Investigations!” was a popular chant at protests last week. It shows that there has been a complete breakdown of trust in the system.

The country’s chief public defender, Yoav Sapir, presents a very disturbing picture in support of claims by the Ethiopian community that they are victims of excessive policing. What they mean is that they are more prone to being arrested by the police, which tags them as a criminal element. Problems of policing were also raised by the 2016 Palmor Report, which examined systemic racism faced by the Ethiopian community.

Sapir gave an example of excessive policing in an interview on July 4 with Israel’s Public Broadcasting Corporation: “A guy riding his bike on the Tel Aviv beach soon finds himself arrested, taken to a side room, ordered to strip and subjected to a full-body search, all because someone else didn’t think that a person like him should be in a place like that in the first place. …”

According to Sapir, the Ethiopian community is so terrified of the police that “parents warn their children ‘Don’t go out to the street’ out of fear of the police. It is a very serious situation in which they have lost trust in law enforcement.” Sapir also noted that the Department of Internal Investigations is a particularly problematic body that must be investigated. According to him, most complaints of police brutality are never investigated.

There was further evidence on July 7 that the Ethiopian community’s claims were justified when a justice serving on the Tel Aviv District Court ruled that the Department of Internal Investigations acted negligently in its investigation of police brutality against a young Israeli-Ethiopian named Jajao Bimero, who was attacked by police with tear gas for no apparent reason. The Department of Internal Investigations closed the case, but Bimero refused to give up and filed a civil suit against the department. He won.

This incident added to growing public distrust in the police, as did the rape of a young girl several weeks ago. In that case, the country was in turmoil after charges against Mahmoud Qatusa, a Palestinian suspect in the crime, were dropped. It was argued that the police investigation was negligent. Under these circumstances, the tragedy of Solomon Tekah is a wake-up call to everyone, including all the justice and law-enforcement systems, urging them to act before it is too late.