For many in the Israel-Ethiopian community, the killing of Solomon Tekah by an off-duty police officer was the product of pervasive racism among Israel's security forces and the country needs the kind of wake-up call only massive civil disobedience can send. 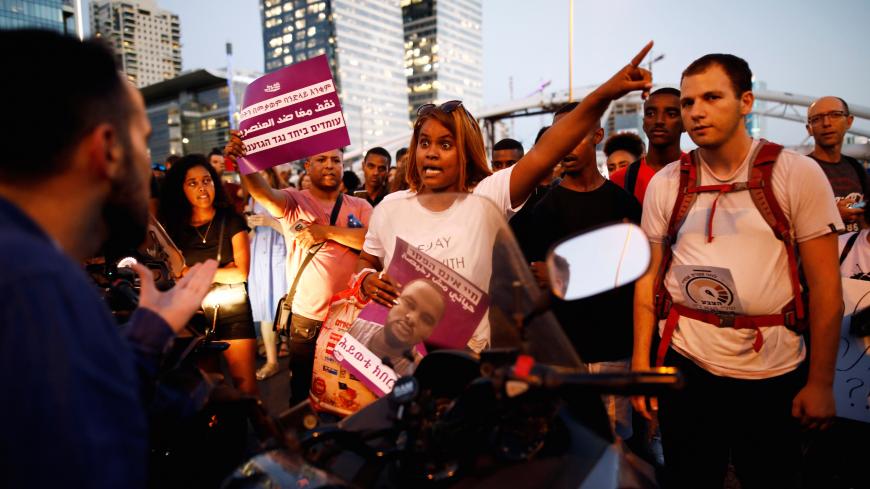 A protester argues with a rider as other protesters block a main road during a demonstration over the death of 18-year old Solomon Tekah after he was shot by police, in Tel Aviv, Israel, July 2, 2019. - REUTERS

Solomon Tekah, 18 years old, sat with his friends at a playground in the Haifa suburb of Kiryat Haim in the evening of June 30. At some point police officer in civilian clothes shot at Tekah, who was hit in the chest and died on the spot. These are the only undisputed facts in this tragedy. The policeman, who was at first placed on house arrest, was moved to a secret location along with his family for fear they would be harmed in the outrage that followed.

According to the officer, he noticed an altercation among a group of youths at the playground. He identified himself and in response the group attacked him with stones until he was forced to shoot in self-defense. He shot toward the ground but the bullet ricocheted and hit Tekah’s chest, killing him. At this stage the ballistic analysis is inconclusive.

The youths tell an entirely different story. According to them, the officer thought they were robbing another youth and drew his weapon. Later they fled from him and he shot at Tekah. In either case, it even the police seem to agree that the incident should not have ended with the death of the young man.

On July 1, the police tried to talk with the heads of the Ethiopian community to arrange for an orderly protest, but the talks didn’t succeed. On July 2, thousands of community members went out to dozens of sites across the country and blocked intersections for hours, attacking passers-by and security forces and destroying public and private property. The damage is estimated in millions of shekels.

As of July 3 at noon, the protesters intended to continue the demonstrations and even to block the approach to Ben-Gurion Airport and the prime minister’s private home in Caesarea.

As the Ethiopian community sees it, only vandalism and blocking streets and intersections all over the country could lead to the necessary changes. “The only way to shake up dark and racist views is by means of disrupting the existing order, and demonstrating to apathetic passers-by how the situation cannot continue, said 26-year-old Maya Atahu from Kiryat Haim. Atahu, who knows Tekah’s family, told Al-Monitor over the phone, “The fact that I mostly see Ethiopians at the protests shows that Israeli society doesn’t care. A few traffic jams might wake up the public.”

“In recent years, 11 Ethiopian-Israelis without a criminal record were shot to death by police,” said Shachar Mula, one of the leaders of the protest and the owner of a maintenance and cleaning company. “You must understand that these protests are a result of growing frustration. A few months ago we organized an orderly protest after the death of Yehuda Biadga by a police officer in Bat Yam. Twenty thousand people came to a [January] protest in Tel Aviv, but since it was too organized, it didn’t interest anyone. I’ve led dozens of protests since the big protests in 2015, but no real process has been undertaken.”

Mula presented the protesters’ demands to Al-Monitor. First, an external body and not the police should investigate all incidents where Ethiopians were killed by police. The shooting officer must be held in jail and not under house arrest. “He should not be allowed to stay at a five-star hotel,” he emphasized. “There’s no real sense of investigating the truth. We have no faith in the police investigation unit. What sharpened the mistrust is the fact that the officer was released to house arrest instead of staying in custody until the end of the proceedings like any murder suspect.”

In recent years there have been a number of incidents in which Ethiopian-Israeli youths were attacked by police. The most significant occurred at the beginning of 2014. The late Yosef Salamsa was arrested on suspicion of breaking and entry and claimed that he suffered serious violence at the hands of the police. Sometime later, Salamsa committed suicide.

In another incident, in April 2015, a policeman was recorded attacking Damas Pikada, a soldier of Ethiopian descent, hitting him and arresting him for no discernible reason. This January, Yehuda Biagda was shot to death in Bat Yam. The police claimed that he threatened police officers with a knife.

Mula believes that the officer shot Tekah because of the color of his skin. “Perhaps the situation there was indeed complicated, but the policeman shot at the Ethiopian because he knew nothing would happen. It’s only an Ethiopian, he thought. Other officers before him shot at Ethiopians and nothing happened to them. Now we’ll show that something does happen and we won’t be silent about this incident. Israeli society is rotten and we will bring this to light. Our mothers are weeping and no one cares.”

Atahu also believes the incident was a “racially motivated murder.” “Former police chief Roni Elsheikh has admitted that police officers see Ethiopians as immediate suspects. Racism starts at the top. Ethiopian-Israelis are gentle and noble people — anyone who personally knows an Ethiopian would attest to this. We are not criminals and we are less involved in crime than other populations. But one white racist officer could pull out a weapon on an Ethiopian and murder him, only because he has never learned not to label black people.”

Yaakov Borovsky, a former major general in the police force, admitted in conversation with Al-Monitor that there’s a problem. “Subconsciously there’s a problem among many police officers where it comes to minorities, and the police must act to educate officers in order to prevent such incidents from happening,” he said, adding that no scenario could justify shooting at Solomon Tekah. “They threw stones at the officer? He should retreat 20 meters. A stone is not defined as life-threatening. Why does he suddenly shoot? What is this, the Wild West?”

In the first hours of the protests on Tuesday, the police showed patience and restraint toward the protesters, allowing them to block streets and intersections across the country. The public reacted by criticizing the police’s decision to allow the demonstrations, which created a sense of anarchy. There was criticism within the police as well. The next day, in light of the extent of the violence, the police stated that the chaos will not be allowed to continue and promised to prevent rioting.

Borovsky defended the decision to allow the demonstrations to proceed. “I have commanded over innumerable disorderly events,” he explained. “When you see real public anger, the biggest mistake is to clash with it. The police work according to a ladder of values, and the highest rung is the sanctity of life and not the rule of law. If removing the protesters would endanger their lives, the rule of law moves aside. In this situation, the protesters should be redirected toward main thoroughfares and harm to the innocent diminished.”

The Ethiopian community believes that a deep shake-up is needed to fix the situation. Atahu insisted on reading, in a shaky voice, the words of Dr. Martin Luther King, Jr.: “The Negro's great stumbling block in his stride toward freedom is not the White Citizen's Counciler or the Ku Klux Klanner, but the white moderate, who is more devoted to ‘order’ than to justice; who prefers a negative peace which is the absence of tension to a positive peace which is the presence of justice.”