While Iran's Planning and Budget Organization has ambitious plans for resolving the country's budgetary problems, upcoming elections, a lack of relevant data and other issues are blocking the path to these goals. 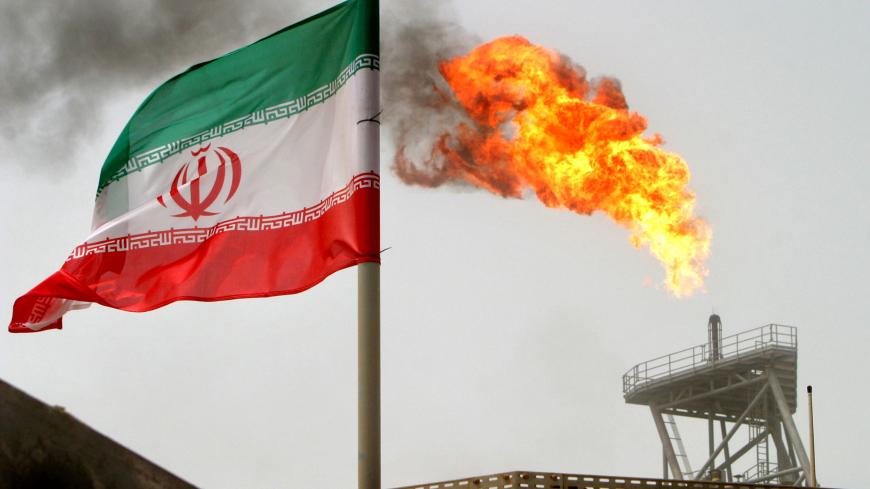 A gas flare on an oil production platform in the Soroush oil fields is seen alongside an Iranian flag in the Persian Gulf, Iran, July 25, 2005. - REUTERS/Raheb Homavandi/File Photo

Budget deficits, foreign exchange reserve imbalances and extra liquidity were cited in a recent report by the organization as major factors damaging the Iranian economy over the years.

The US maximum pressure campaign on Iran’s economy has drastically reduced the country's foreign exchange earnings from oil sales. As a result, should budget structural reform continue to drag on, the budget deficit could force the government to encroach on banks' meager resources. This would gradually spike liquidity and ultimately lead to rampant inflation — a common phenomenon over the past 40 years. Lackluster economic forecasts appear to be blocking chances of meaningful economic growth for years to come, while external financing appears to remain remote under the current political circumstances. When banking system problems are added to this equation, there is practically no viable solution left other than budget reform to uproot long-standing, unsound budgeting methods.

The Planning and Budget Organization has divided the components of its proposed budget reform framework into four distinct sections. They consist of enhancing the institutionalization of the budget, increasing the efficiency of government spending, maintaining sustainable revenue generation and stabilizing sustainable economic growth at short- and medium-term horizons.

Many of the items related to improving the institutionalization of the budget such as the reform of budgeting processes should have been implemented long ago as part of the state budgeting system. These are deemed to be among the inevitable and anticipated functions of the Planning and Budget Organization.

Among the agency's suggestions that are worth moving forward are those to transform the government's general budget document into a more comprehensive budget document, for there to be a two-year budget and for the budgeting structure of state-owned enterprises to be corrected.

One objective the agency is pursuing in this plan is to bring para-governmental organizations under its oversight, namely institutions such as the Foundation of the Oppressed and Disabled and Headquarters for the Implementation of the Imam’s Decree, both under direct supervision of Supreme Leader Ayatollah Ali Khamenei. However, attaining this goal in the short term is open to question; the conversion of a budget document to a governance document goes beyond the authority of this state agency.

Additionally, implementing two-year budgeting for the upcoming fiscal years appears to be impractical as it requires an information infrastructure that is currently not available. Besides, it is not concretely defined how such a measure could help realize the objectives outlined in the plan for the coming fiscal years. Therefore, it is doubtful that two-year budgets could outperform the ones implemented on a yearly basis.

Strikingly, the Planning and Budget Organization has not spotlighted money-losing state-owned enterprises and their considerable burden on budget resources every year. While the budget agency goes into detail about how it considers the cost of the health reform plan to be overwhelmingly high, it only briefly examines the sizable funding freely provided to state firms. It also seems that cutting the budgets of the state-owned companies are not yet a priority in the budget reform. But this is of utmost significance. The majority of businesses owned by the state are illiquid and their net margin has been in the red for the past few years or perhaps longer. Also, due to a lack of transparency and an absence of proper monitoring mechanisms, state-owned enterprises are occasionally engaged in corrupt activity. Therefore, the privatization of a majority of these firms that are on the verge of bankruptcy and holding them responsible for their year-in, year-out negative financial performance sounds like a giant step forward.

In order to generate sustainable revenues, the plan suggests the development of tax bases, which is a good idea in general. Unfortunately, the government looks at tax collection simply as a means of making ends meet, whereas taxation should be a mechanism for regulation-setting and transparency in the economy rather than being solely applied for the generation of revenue. One of the serious challenges hindering economic growth in Iran is the existence and expansion of unproductive parallel markets menacing the real economy. Nonetheless, the government continues to neglect the extension of regulatory taxes — chiefly direct taxes — on some asset classes such as empty homes and capital gained from engaging in the housing market.

The Planning and Budget Organization’s reform plan to raise energy prices seems to concentrate only on aiding the government to make money without an emphasis on establishing an integrated economic information system of Iranian households as the centerpiece for eliminating energy subsidies. The experience of the targeted subsidies policy showed that an increase in energy prices will not have a tangible impact on households' purchasing power in the medium term. It seems the budget organization is more concerned with coming up with the money to cover the budget deficit rather than reform the national economy. While it is linking the policy of reforming energy subsidies with redistribution policies in its suggested plan, this would impose huge costs on the domestic economy and further exacerbate budget gaps in the long term.

As for plans to stabilize the macro climate, the budgeting organization has suggested turning to the National Development Fund of Iran in the event of economic shocks. This has been justified by referring to the development fund as a “stabilization” fund. Worryingly, this would degrade its core function as a long-term investment fund down to a vehicle to fill the government's budget gaps in times of economic turmoil.

In the final analysis, given that the upcoming parliamentary elections are set for Feb. 21, current members of parliament would not find the opportunity to examine and approve those sections of the budget reform that require legislation. The incoming members of parliament will be taking office about three months after the elections. The next presidential election is likely to be set for the second quarter of 2021. It is evident that there will not be much time at hand for joint work between the executive and legislative branches on budget reform as government members will have been engaged with preparations to win the popular vote for the presidential election.

All in all, current efforts to reform the budget structure do not seem poised to bear fruit but rather appear bound to hit a dead end.