There are leaks that Hamas in the Gaza Strip is moving to merge and dissolve ministries as part of efforts to counter its financial crisis. 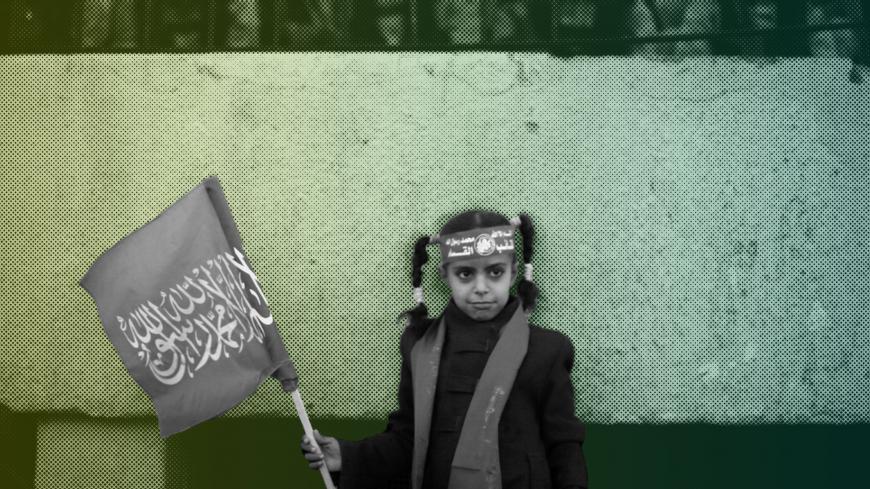 A Palestinian girl holds a Hamas flag during a rally marking the 29th anniversary of the founding of the Hamas movement, Khan Yunis, southern Gaza Strip, Dec. 11, 2016. - REUTERS/Ibraheem Abu Mustafa

GAZA CITY, Gaza Strip — The Hamas government in the Gaza Strip is currently in the process of merging ministries, to ultimately 14 ministries instead of 23. The Ministry of Foreign Affairs was dissolved July 21 and its staff have been transferred to several other ministries, Al-Monitor learned from government sources.

Other ministries will meet the same fate in order to ease the financial burden their budgets are causing. The Hamas government is suffering a financial crisis and took this unilateral decision without referring to the government in the West Bank headed by Prime Minister Mohammad Shtayyeh and formed by President Mahmoud Abbas in April.

Although Hamas previously has denied any intention to dissolve ministries, it has been discussing the matter behind closed doors. Back in 2011, Hamas announced that it intended to merge some ministries but it never went through with it.

The committee formed by the government’s general secretariat is close to finalizing most of its reports on the status of these ministries and the status of the tasks assigned to their employees in order to integrate them in the various ministries, the official explained.

In this context, Yahya Moussa, a Palestinian Legislative Council member from Hamas' Change and Reform bloc, told Al-Monitor that the government is yet to issue a statement on dissolving and merging its ministries, noting that the committee formed by the government’s general secretariat is still studying its options. “Once a decision is reached, it will be announced,” he said.

“It was only natural to dissolve it as it has no tasks in the Gaza Strip,” Moussa noted.

He attributed the Hamas government’s choice to dissolve and merge ministries to the fact that they can simply be replaced with committees or councils.

Moussa said that this comes within the framework of Hamas’ efforts to develop government work and lead administrative reform within the ministries, as well as create committees capable of carrying out the tasks of those ministries, all of which fall within Hamas’ comprehensive vision aimed at improving the services provided to citizens.

He noted that the merging of ministries helps raise the work efficiency within ministries and increase the effectiveness and performance of employees. He said, however, that the merging may not significantly reduce the financial burden on the government, since the employees’ salaries are the real burden and not the operational expenses of the ministries.

Mustafa al-Sawaf, political analyst close to Hamas and former undersecretary of the Ministry of Culture, told Al-Monitor that the Hamas government intends to merge ministries in order to control their work and ease the financial burden and expenditure. He said that this step will improve the quality of work and fill the needs of other ministries in terms of staff, as some ministries are understaffed.

He added that the ministries that will be merged do not have a large number of employees; their work in the Gaza Strip is limited and formal and does not have sufficient tasks to be an actual ministry. He noted that his only regret is that the Ministry of Culture will be dissolved, especially as it has a role in reviving the cultural movement in Gaza.

Speaking about Hamas keeping the issue away from the media, he explained that it would be unwise to announce something before it is completed, ruling out the possibility of Hamas having political motives for such a step as it will not affect reconciliation.

Sawaf further stressed that it is only a temporary administrative measure.

Talal Okal, an independent political analyst, told Al-Monitor that this step will properly invest and rationalize both staff and finances, especially since some ministries do not have enough work to complete their annual goals.

He said that politically speaking, the Gaza government is not supposed to merge or dissolve ministries but rather maintain the ministerial arrangement known in the West Bank and not tamper with it. He explained that in the event of national reconciliation, the employees of the Hamas government will be merged with the Ramallah government according to their competencies.

Okal noted that employees will occupy the same positions they had in their old ministries, which will not be easy as some positions will overlap and a dispute over task distribution is likely to arise.

Egypt is currently making efforts to move forward with reconciliation between Fatah and Hamas. Fatah demands that Hamas hands over the crossings and government offices before resuming reconciliation talks that have been stalled since March 2018.