Why US companies seek role in Egyptian oil sector

The Egyptian oil and natural gas market is witnessing a significant expansion of US companies and although some observers are concerned about this expansion, most agree that this reflects the stability and neutrality of the Egyptian market and is in its favor in the near and long terms. 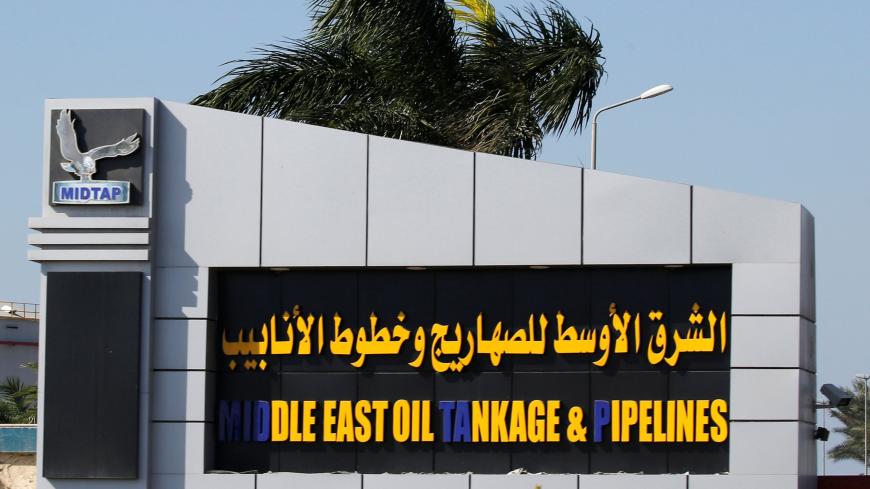 The entrance of Middle East Oil Tankage and Pipelines is seen at the highway of Alexandria, Egypt, Nov. 7, 2018. - REUTERS/Amr Abdallah Dalsh

CAIRO — The Egyptian energy sector gets much praise these days. The Energy and Environment Committee of the Egyptian parliament issued a statement July 18 praising the results of a meeting between Myron Brilliant, executive vice president of the US Chamber of Commerce, and Egyptian Minister of Petroleum and Mineral Resources Tarek el-Mulla.

The statement considered that Brilliant’s commend of the Egyptian energy sector comes in recognition of President Abdel Fattah al-Sisi’s support for the sector and the Ministry of Petroleum’s efforts to implement energy projects along with national and foreign companies.

Following a July 15 meeting in Cairo, Brilliant issued a press statement praising Egypt’s oil sector. He described Egypt's program for the development of the oil sector launched in 2018 as ambitious, in terms of training human cadres and improving their level of performance, pointing out that this program creates promising opportunities for US companies to invest in the Egyptian oil sector. This was evident by the entry of US companies, such as ExxonMobil, to the Egyptian market for the first time in the fields of exploration and production, he added.

Brilliant’s visit comes ahead of the results of a bid launched by the Egyptian Ministry of Petroleum in March 2019 to obtain concessions for the detection, exploration and production of oil and natural gas in the Red Sea.

Some eight international companies submitted their bids, including three from the United States, which were not identified in the media. A source from the Ministry of Petroleum told Al-Monitor on condition of anonymity that the companies are Apache, ExxonMobil and Noble Energy, but Al-Monitor could not confirm this information, as the spokesman of the Ministry of Petroleum did not respond to several calls.

The bidding results are expected to be announced by the end of August.

The bid is witnessing the first participation of ExxonMobil in the drilling and exploration of oil and natural gas in Egypt. Meanwhile, Apache — through its alliance with the Chinese Sinopec Corporation — already controls 27% of Egypt's daily production of crude oil and condensates (187,000 barrels per day).

Nobel Energy has been involved in the Egyptian market since 2011 through its exploration equipment — most notably the excavator Nobel Paul Romano used in the detection of oil and natural gas in the Mediterranean waters of Egypt.

In September 2018, Nobel Energy also acquired — in partnership with Israeli company Delek Group — 39% of the shares of the Egyptian-based multinational East Mediterranean Gas company that runs the Arish-Ashkelon pipeline. The pipeline was used to export Egyptian natural gas to Israel from 2008 until 2011, when it was repeatedly attacked after the January 25 Revolution; it is used to export Israeli gas to Egypt under a June 2019 deal.

Noble Energy is also seeking to acquire the right to establish a natural gas pipeline from Egypt to Cyprus, which will be the first terminal for exporting Egyptian or Middle Eastern gas to Europe through Egypt.

Former Minister of Petroleum Osama Kamal attributed the demand of international oil companies, including the United States, to invest in Egypt to the stability of the Egyptian market resulting from the economic reform plan launched in November 2016.

Egypt launched economic reforms as part of a three-year $12 billion loan program with the International Monetary Fund. In addition to floating exchange rates, Egyptian authorities reduced subsidies, allowing greater opportunities to the private sector compared to the public one, developing the Egyptian infrastructure, and settling the debts of the Egyptian state to global partners.

Sayed el-Morsy, retired cost control deputy manager and member of the Bids Committee for Tendering and Awarding at Apache Egypt, agreed and told Al-Monitor that one of the most important features of the Egyptian oil and natural gas market is that it is a nonpoliticized market for certain countries or alliances.

Morsy said that Egyptian bids are offering all companies from different nationalities — including Russian, American, European, Chinese — equal opportunities to win exploration and production privilege rights, regardless of political ties. The only condition for winning the bid is to have the best offer for the Egyptian side in terms of quality and cost. “Unlike Iran, for instance, whose government is always believed to be biased to Russian companies against European ones,” he added.

A political dispute between Russia and Egypt has been brewing over the return of Russian tourism to Sharm el-Sheikh, after Russia banned flights to the Egyptian city in response to the Russian plane crash over the Sinai Peninsula in October 2015. Russian authorities described the crash back then as a terrorist act. Meanwhile, several Egyptian parliamentarians as well as the Ministries of Tourism and Foreign Affairs considered Russia’s long-lasting ban on flights — under the pretext that Egyptian airports aren't safe — as “intransigence.”

Meanwhile, Egyptian-Qatari relations are witnessing tensions as Doha is supporting the Muslim Brotherhood and offering them asylum — even after the Egyptian government classified the group a terrorist organization at the end of 2013.

Despite these tensions, the Egyptian government approved in October 2017 the Russian Rosneft’s acquisition of 30% of the concession rights in the Zohr gas field, Egypt’s largest. The Qatar Investment Authority, the state-owned sovereign wealth fund, had acquired 19.5% of Rosneft shares on December 2016.

In addition, Egypt has welcomed the participation of Nobel Energy in its market although US businessman George Soros acquired huge shares in the company through the stock market in 2018. Relations between the Egyptian government and Soros are indirectly tense over the latter’s huge funding of Human Rights Watch (HRW) through his charitable organization The Open Society Foundations. Egypt believes HRW is biased toward the Muslim Brotherhood and lacks accuracy and credibility in its reports on Egypt.

Hesham Ibrahim, professor of economics at Cairo University, told Al-Monitor that the US companies’ efforts to expand in the Egyptian market are in Egypt’s interests. He said that these US companies are pioneers and leaders in the global oil and natural gas market, which can draw the attention of other international companies to the importance of the Egyptian market and encourage existing companies to increase their investments.

“With the participation of more companies in the Egyptian market and the increasing investments of existing ones, Egyptian official bids will find more participants providing the state with more options to choose from in terms of experience, competitive prices and quality,” Ibrahim noted.

He added, “The presence of US, European, Russian and Chinese investments proves that the Egyptian oil and gas sector is an open nonpoliticized one. European countries are looking for such a market to import gas from, after its claimed projects to import gas from Qatar or Iran through pipelines passing through Iraq, Syria and Turkey had stalled for many reasons, most likely political ones. This can make the Egyptian project to export gas to Europe through pipelines to Cyprus and Greece a preferred option for many European countries.”