The Egyptian government is reporting advances toward achieving its goal of digital transformation in all sectors. 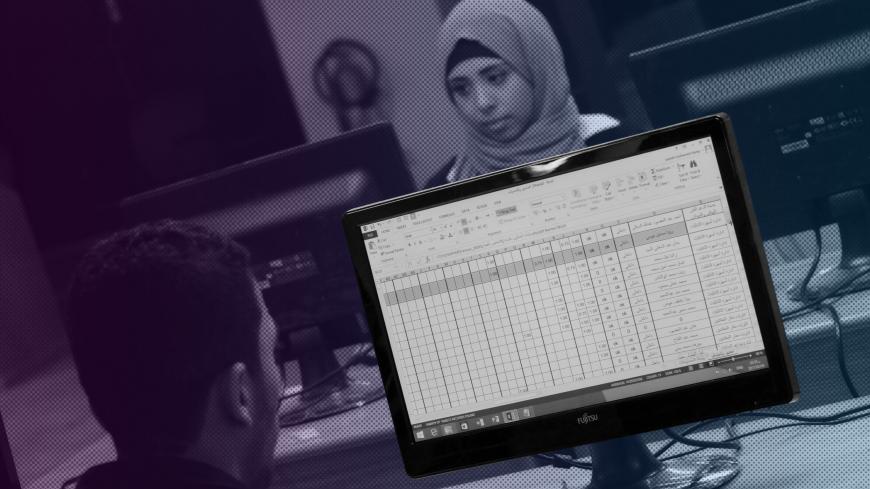 Employees work in front of a computer screen at the headquarters of the Central Agency for Public Mobilization and Statistics in Cairo, Feb. 5, 2017. - REUTERS/Shokry Hussien

Egypt is making progress in implementing its national goal of streamlining administrative procedures and turning itself into a hub for digital innovation.

On July 17, the Ministry of Planning, Follow-up and Administrative Reform released a report highlighting the government's advances in this regard. One of the successes outlined is its campaign against hepatitis C. The campaign has been going on for years but a program launched in October is coming to fruition. The project has provided more than 10,000 digital tablets containing citizens’ data to medical units and helped modernize 197 local medical units in various provinces by introducing modern technology and providing computers.

“Digital transformation has become inevitable. It will help the country move from one era to a completely new era,” Sherif Hashem, head of the executive office of the government-affiliated Egyptian Supreme Cybersecurity Council, told Al-Monitor.

The government is still working on rolling out an electronic platform announced in December to assess the performance of government agencies. As Egypt is moving ahead with this strategy, many questions are being raised about how it might help curtail corruption and what challenges it will face.

The project, called Egypt's Performance System, is expected to boost economic growth and help with implementing Egypt's Vision 2030 for sustainable development. On July 1, the Egyptian Planning Ministry held a workshop attended by representatives of several ministries to discuss the digital transformation mechanisms.

Achieving digital transformation is "a must," Hashem said. "Egypt has an ambitious, realistic plan to achieve it in all sectors."

Digital transformation started to make headlines in Egypt in 2017 when President Abdel Fattah al-Sisi issued a decree to establish the National Council for Payments. The council seeks to regulate all issues related to the banking and payment system. It develops electronic payment systems and policies that improve access to financial opportunities and services (financial inclusivity).

The council is authorized to reduce the use of banknotes and spread the use of e-payment methods. In May, the government started implementing the most important steps in the field of financial inclusion by launching an electronic system to collect fees, such as electricity bills and taxes.

Since such progress requires huge infrastructure changes at a hefty cost, the Egyptian government has signed cooperation protocols and fostered partnerships with international information technology (IT) companies.

In December, Sisi and Prime Minister Mostafa Madbouli met with Cisco Systems CEO Chuck Robbins to discuss the US company's support of digital transformation in Egypt. The meeting produced a signed memorandum of understanding with the company with the aim of financially and technically supporting digital transformation

Belal Mohamed, a programmer at a major IT company in Egypt that he preferred not to name, told Al-Monitor there are many challenges facing digital transformation in developing countries in general, and Egypt in particular.

“The idea of ​​digital transformation in Egypt has been delayed because of people's beliefs. They don't want to leave the traditional methods. Therefore, training cadres and raising awareness among people on how to use modern technology is of paramount importance,” he said, adding that more training centers are needed.

Boosting investments in the IT sector should be given top priority to ensure the transition's success, Mohamed said. “Health and transport are among the promising sectors that can make the best use of digital transformation. Egypt has already taken many steps in these fields. So, developing the investment atmosphere is essential."

Regarding the electronic performance assessment system, Mohamed said not all public employees may feel comfortable with it. For example, each government entity assesses workers annually, and currently, their performance is rated at 95% to 100% as a matter of routine.

"This has become a tradition regardless of their performance. The new system will accurately assess workers based on their productivity," Mohamed said.

“It may take time to spread digital transformation in all sectors, but it's not impossible,” he concluded.