President Donald Trump said on Saturday his decision to wave off a retaliatory strike on Iran for the downing of an American drone was being celebrated both by allies and critics as a wise move to stave off overextending the US military. 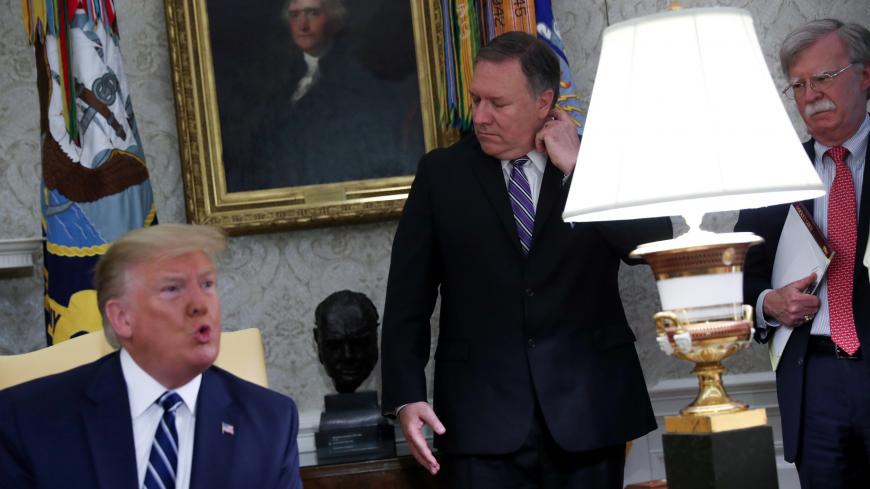 US President Donald Trump speaks during a meeting with Canada's Prime Minister Justin Trudeau as Secretary of State Mike Pompeo and White House national security adviser John Bolton look on in the Oval Office of the White House in Washington, US, June 20, 2019. - REUTERS/Jonathan Ernst

President Donald Trump said on Saturday his decision to wave off a retaliatory strike on Iran for the downing of an American drone was being celebrated both by allies and critics as a wise move to stave off overextending the US military.

But the on-again, off-again strikes came at a challenging political moment for Trump, as the commander-in-chief kicked off his reelection campaign at a packed rally in Orlando, facing an uphill climb in the polls against most of his Democratic rivals.

The call to turn American warplanes around highlighted the central challenge of the president’s “America First” foreign policy: living up to the 2016 pledge to end US involvement in the Middle East while standing up to American adversaries in the region like Iran.

Speaking at the White House on Saturday, Trump invited the idea that pundits struggled to define him as either a hawk or a dove, floating the image of a president courted by advisers on either side of the foreign policy spectrum who favor using the carrot and the stick.

“Everyone was saying I’m a warmonger. Now they’re saying I’m a dove,” Trump told reporters on the White House’s South Lawn before huddling with advisers at Camp David. “I have John Bolton, who I would definitely say is a hawk, and I have other people on the other side of the equation. But ultimately, I make the decision, so it doesn't matter.”

Trump’s self-described image of being courted by all sides in the White House Situation Room extended to cable news airwaves. On Fox News, surrogates gave the impression the decision not to strike was a nod to both the war-weary public and leading Republican allies such as Sen. Lindsey Graham, R-SC., who has pushed the president to ratchet up pressure on Tehran.

“This is the first administration that’s on the strategic offensive against Iran in 39 years,” retired US Army Gen. Jack Keane, once floated by Trump to serve as defense secretary, said on Fox News. Trump’s response, Keane assured, had indicated the United States would respond with overwhelming force if Iran killed any American troops.

Meanwhile, conservatives skeptical of US military intervention also praised the move. Trump may have been persuaded to hold off an a strike, in part, by divisions among Republicans regarding the merits of a military strike. Informed sources tell Al-Monitor that Trump sought counsel from beyond his White House and Cabinet war counsel. Fox host Tucker Carlson, who reportedly called the president before the move, said on his eponymous show Friday that Trump had stuck by his campaign promise “not to repeat the same mistakes” of the Iraq War. Sen. Rand Paul, R-Ky., still feared Trump’s Cabinet was “salivating for conflict” with Iran, he said in a tweet: “Don’t do it, Mr. President.”

“He wants to be tough but he also wants to be liked and he wants to get along — we’ve seen this in his approach to Kim, Putin, Xi — and now he is trying to keep the door open for the Iranian regime as well,” said Eric Brewer, the former deputy national intelligence officer for proliferation at the National Intelligence Council. Brewer added, “But he’s going to need to do more than just promise Iran it needs a deal to become rich,” said Brewer, now a fellow at the Center for Strategic and International Studies think tank.

On the other hand, while Secretary of State Mike Pompeo — who left on a surprise trip to the region this weekend — dodged shouted questions from journalists on Friday about his reported push to retaliate, the political uncertainty in the wake of the strikes has invited fresh demands from Trump allies who favored kinetic action to call on the president to draw red lines for US military intervention.

“What will the world’s response be if Iran follows through on their threat to restart nuclear enrichment,” Graham tweeted on Friday afternoon. “I hope the United States will make this a Red Line,” referencing former President Barack Obama’s famous 2012 declaration that Syria’s use of chemical weapons against its people would trigger retaliatory US strikes.

In lieu of launching missiles at Iran, Trump also called for the administration to beef up sanctions against Tehran twice this week, without specifying which industries the United States would seek to target. The US administration has insisted that its pressure campaign has forced the Islamic Revolutionary Guard Corps, Iran’s elite military force, and Shiite-led proxies in Iraq and Lebanon to cut back costs, but those figures do not square with Tehran’s official numbers.

Yet with reelection looming in the background of every foreign policy decision Trump makes over the next 17 months, it’s not clear the American people would support a stronger military push against Iran after Trump has authorized sending 2,500 new US troops, the USS Abraham Lincoln carrier group, a bomber wing and Patriot missile defense batteries into the Middle East to tamp down on the Iran threat.

Trump opted to purge some of his reelection campaign’s major pollsters after leaked internal polls found him trailing former Vice President Joe Biden and other Democratic contenders in key Midwestern battleground states such as Michigan and Wisconsin.

A Reuters/Ipsos poll conducted last month found that 49% of Americans disapprove of how Trump has handled the Iran challenge, with just 39% of respondents approving of the policy. But experts say US voters tend to give Republican presidents more of the benefit of the doubt in polling when it comes to using military force than Democratic rivals.

“I don’t think he’s looking for a major intervention and a major war,” said Elizabeth Saunders, a Georgetown University professor who studies the politics of US foreign policy. “He has in the past been receptive to pinpoint strikes that demonstrate strikes that show strength. Such an option may be completely illusory, but if it could be sold to him that way, that’s what he could grab on to.”