Lebanon's beloved arak is similar to other anise-based drinks like Greek ouzo or Turkish raki, but it still enjoys a distinct and proud local tradition. 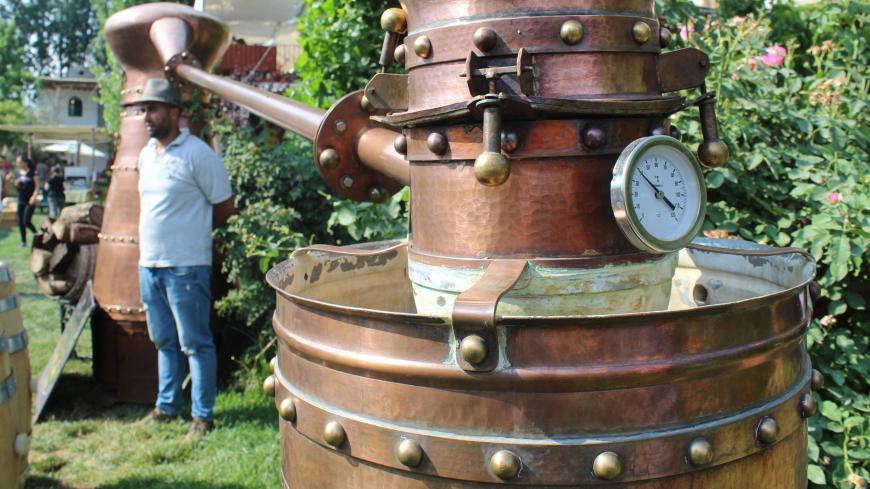 Chateau Rayak's alembic, a still used in the making of arak, is seen at the Festival de L'Arak in Taanayel, Lebanon, June 16, 2019. - Sam Brennan/Al-Monitor

TAANAYEL, Lebanon — Bobbing up and down in the circles of the folk dance dabkeh and eating a rich assortment of dips, meats and vegetables known as mezze, hundreds of people celebrated a drink that makes both dabkeh and mezze more enjoyable, the anise-based spirit Arak.

The small town of Taanayel's Festival de L'Arak, now in its fourth year, was held June 15-16 in the Bekaa Valley. Run by Arcenciel, a Lebanese nongovernmental organization that promotes diversity and development, at the organization’s EcoLodge hotel, the event celebrated the long history and unique cultural role of Lebanon’s national drink.

Served with two-thirds water and ice, the liquor is similar to but — as arak producers quickly and forcibly point out — still distinct from other anise-based drinks like the Greek ouzo or Turkish raki.

It is made by crushing grapes and distilling them into alcohol using a copper contraption called an alembic. In the second or third distillation the all-important anise is added, giving the drink its distinct taste. Once the distilling is done, the liquid is placed into large clay jars to make the taste smoother. Small changes to the process lead to a wide variety of outcomes, and the alcohol content varies between 50% to as high as 80% when homemade.

Richard Kazan, the director of Arak Bechara Balaban and one of the many producers at the festival, is well acquainted with this process as a fourth-generation arak maker. Bechara Balaban itself has been producing arak since 1883 and was the first company to be registered in the Bekaa governorate of Lebanon. Its business number is 1/1948.

The capital of this governate, Zahle, is the epicenter of arak production. Originally, people “would make arak from the fermentation of grapes only," Kazan told Al-Monitor. "Then the Zahle people added anise.”

Arak continued to be linked to Zahle and the surrounding areas, including Taanayel, often playing an integral role in holidays and celebrations. Kazan said, “My grandparents and parents during Easter would have nuts, not chocolate, and arak without water. This is a tradition. You would get one almond and a full glass of arak."

This culture is common to nearly all who grew up in Zahle. Elias Boutros Maalouf, managing partner of Chateau Rayak, told Al-Monitor that he began making arak and wine for his grandfather. Though he passed away before Maalouf could serve him arak, a photograph of his grandfather holding a vine of local grapes is engraved on Cheteau Rayak’s giant alembic.

Chateau Rayak is a small boutique producer, only making 750 bottles a year, with 18 kilograms of grapes going into every one. “This is a culture that has been in the family for hundreds of years. … We are not aiming to be a business, we just want to keep good quality arak in the family,” Maalouf said.

His personal connection to it became apparent when he saw it being made, he said. “We were not in Lebanon during the civil war. But my uncle was here still working and when I came back it was amazing to see the alembic, to see the [liquid] with such a red color go in and come out the other side clear. It was magic to us.”

The use of the word magic hints at arak’s long and strange history. The alembic was used to make alcohol back in the eighth century by magician, alchemist, philosopher and general polymath Jabir ibn Hayyan under the Umayyad Caliphate. But despite Arak’s lofty past it has gone through a turbulent period in recent history, with the Lebanese Civil War and regional instability seeing the drink retreat to its home of Zahle.

As Maalouf explained, “We used to have a perfect market in the 1970s and we used to sell more than today, as we sold to Iraq and Syria. But with all the problems we have around us, the market has gotten smaller.” However, he added, “but the youth are starting to appreciate arak.”

Christiane Issa Nahas, director of Arak Brun, is the daughter of Elie Issa, who with Nayla Issa el-Khoury took over the Domaine des Tourelles winery, where the arak is made, in 2000. She has also noticed this trend with Lebanon’s younger population, and has even begun to serve the drink in novel ways by mixing it into cocktails with sage, pomegranate, mint and other ingredients.

“We do the mixology to show the younger generation that you can do this with arak. You don’t have to always drink vodka and gin," she told Al-Monitor. It's distressed some more traditional Arak drinkers. Issa Nahas recalled her father's response, saying in an effected deep voice while comically wagging his finger, “Arak Brun should be drank alone.”

However, Issa Nahas was happy to skirt tradition to get young people to try arak, She said, “Younger people should start focusing on their national drink. Everywhere in the world people have wine, but only here do we have arak. So we are counting on the Lebanese.”

She added that with a third of Arak Brun and Domaine des Tourelles' production going overseas, the organization relies on the Lebanese diaspora. A 2016 report found that as much as a quarter of Lebanese arak is exported.

While Arak Brun is one of the largest producers of arak, making some 400,000 bottles a year, arak is still seen as an intensely local drink. Isaa Nahas said, “In Zahle people eat liver with fresh mint and onions with a glass of arak” early in the morning. She added, “To an American or someone, they need time, but here it is in our blood."