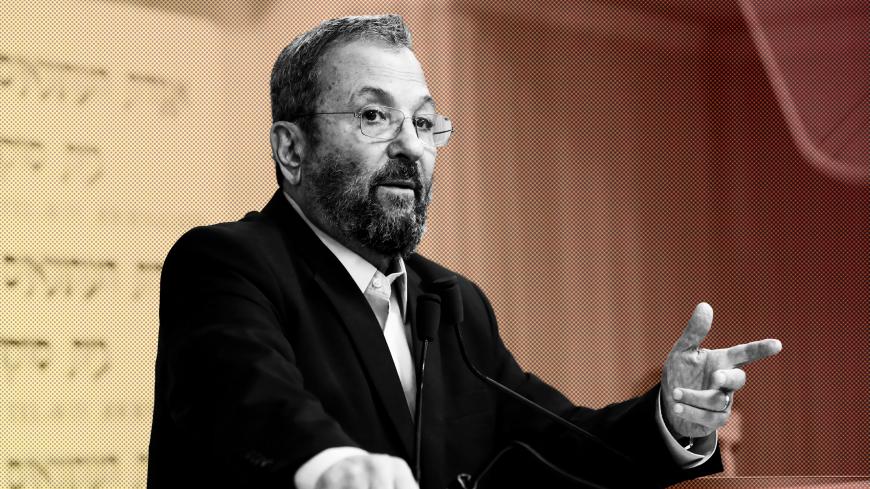 Two bad omens for the Blue and White party in one day: the first, when former Prime Minister Ehud Barak announced June 26 that he is establishing a new left-wing party; the second, when Nitzan Horowitz won the primaries June 27 to lead the Meretz Party.

At age 77, at an improvised and surprising press conference, Barak burst back into active political life and disrupted the center-left camp. Barak hit Prime Minister Benjamin Netanyahu mercilessly, armed with sharp and aggressive messages on the urgency of returning the country to sanity and the necessity of saving the Zionist enterprise from Netanyahu’s corrupt regime. The immediate victim of his stirring display was chairman of the Blue and White party, Benny Gantz. Without any special effort, without a promoter or media advisers, Barak showed exactly what Gantz lacks: a killer instinct.

Strangely, Barak challenged Gantz more than he did Netanyahu, since the immediate significance of establishing a new left-wing party is a split in the vote and a shift of the electorate from Blue and White to Barak. Barak’s new party still doesn’t have a name, but it has a mission: taking down Netanyahu. Barak’s No. 2 is the former deputy chief of staff, Gen. (Res.) Yair Golan, which puts the new party in the category of a generals’ party, alongside Blue and White. Three of Blue and White’s senior members — Gantz, Moshe Ya’alon and Gabi Ashkenazi — are former generals.

Anyone who listened to Barak’s press conference and his many interviews afterward, speaking of alliances in the center-left bloc, understands that he has identified his last chance to return to the prime minister’s office. Barak believes that if he concentrates enough forces around him, he could overtake Gantz and turn into the leading candidate in the bloc opposing Netanyahu. It sounds detached from the current political reality, but Barak is known for his roundabout plans.

Such an alliance is possible with newly elected Chairman of Meretz Horowitz, an openly gay man and one of the most eloquent voices in the left opposed to the phenomenon of Blue and White. The party had damaged Meretz in the April 9 elections by succeeding to draw traditional voters of the veteran left-wing party. Meretz voters so longed for Netanyahu’s downfall, to the extent that they were willing to cause the extinction of their own party, which finished the election with barely four mandates, exactly the minimum needed to pass the Knesset-entry threshold.

Barak is striving for unity with Meretz and with the Labor Party, after the latter chooses a new chairman July 2. If it will be young Knesset members Itzik Shmuli or Stav Shaffir, there is a chance one of them would let Barak have the first spot on the list. If veteran Knesset member Amir Peretz wins, chances for such a union are slim, although Peretz also seeks political alliances, such that it seems a united left list would be formed. If this happens, it would be a dramatic change that would impact the entire political map.

In his eloquent victory speech Horowitz presented a clear vision of a civic, diplomatic and economic left that was well reasoned and full of a fighting spirit. He frontally attacked Blue and White and called it a “soap bubble on Valium.” This was an especially cruel attack: “Thirty-five useless and pointless mandates. Compared to them Meretz is a real party and not a shady election eve deal.” In the end, Horowitz called on all Meretz voters who left for Blue and White to “come home.”

Blue and White responded weakly, which attests to confusion at the situation quickly shifting against them. “Patronizing more than a million Israelis who voted for Blue and White two months ago is not a recipe for success,” it stated. Blue and White has tried since Wednesday to form a strategy in light of the changed circumstances. Until now it has not had real rivals in the center-left and in April’s election it eviscerated the Labor Party to only six mandates. Now Blue and White is no longer the fresh list that challenged Netanyahu’s rule. It’s a tired party with tense relationships at the top.

Barak understands the potential. Blue and White is at a sensitive point — while it had an impressive achievement in the election with 35 mandates, it remained in the opposition. Barak smells Gantz’s weakness as a candidate for prime minister and he does not hesitate to attack him for his conduct toward Netanyahu. “People see his determination to win at any price,” Barak said in an interview with Ynet, “but on the other hand it’s a group that seems like it’s seeking a good grade in courtesy and manners. An election campaign is not about courtesy and manners and you have to do all that’s necessary, except break the law.” Barak turned his fire especially toward Gantz, who was much criticized for his conduct and lack of energy in campaigning.

The chilly response with which Barak’s announcement was received in Blue and White attests to the pressure the party is feeling. Even a day later, not one of the four leaders of the party intentionally addressed Barak’s announcement and not one of them congratulated him. The media strategy they decided on was to ignore him. The question is how much longer they could sit crossarmed while Barak, full of zest and a fighting spirit, tails them.

Barak has several weak points that could be attacked: his brief term as prime minister (less than two years), the second intifada that broke out during his term, the split of the Labor Party in 2007 and his long partnership with Netanyahu. Blue and White’s strategists are now trying to form a plan to block the falloff in mandates and are waiting to see the extent of the damage. According to a poll published on the evening of June 26 on Channel 13, Barak gets six mandates and Blue and White gets 32. That’s still acceptable, but as Blue and White starts bleeding the battles will start in the center-left bloc. The main beneficiary will be Netanyahu. He has always benefitted from rifts within the opposing camp. The big question is whether all the big egos of the generals leading the center-left could unify. If they do, Netanyahu would have to start worrying.