The US administration's latest sanctions targeting several Iranian officials, including the country's supreme leader, have drawn the ire of the government in Tehran. 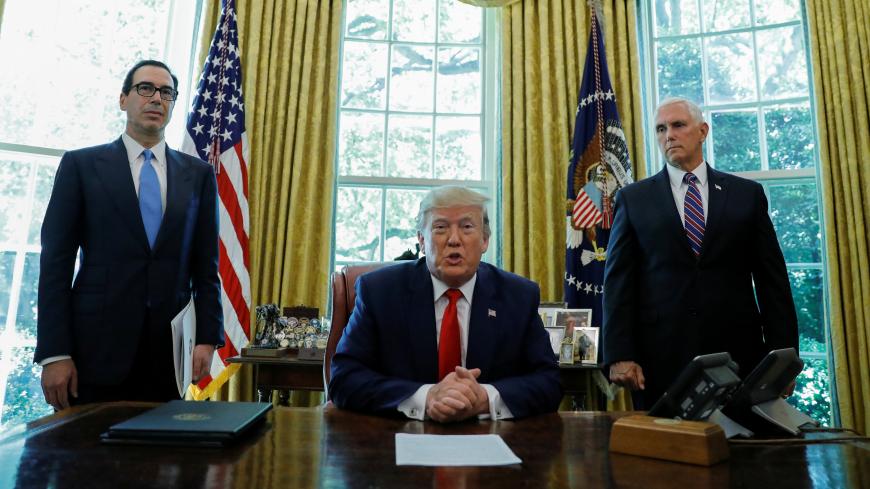 US President Donald Trump speaks before signing an executive order imposing fresh sanctions on Iran as Treasury Secretary Steven Mnuchin and Vice President Mike Pence look on in the Oval Office of the White House in Washington, US, June 24, 2019. - REUTERS/Carlos Barria

The punitive measures were approved by President Donald Trump as "a strong and proportionate response" to what he called "Iran’s increasingly provocative actions." Last week, Iran's Islamic Revolutionary Guard Corps (IRGC) shot down a US drone over the Gulf of Oman near the Strait of Hormuz, saying the surveillance aircraft had violated its airspace, while Washington insisted the Global Hawk drone was simply flying within international borders.

In a defiant gesture against Trump's move, Rouhani praised Iran's missile capabilities, expressing his gratitude to the IRGC for downing the sophisticated drone. He also noted that the latest US sanctions contradict Trump's repeated pushes for negotiations. "By banning Iran's foreign minister, you once more proved that your claims about dialog are but a lie," Rouhani said, referring to US government plans that will further include in the same sanctions measures to target Foreign Minister Mohammad Javad Zarif later this week.

Reacting to that specific move, Iran's Foreign Ministry Spokesman Abbas Mousavi took to Twitter, describing Zarif as the "commander" of Iranian diplomacy and, by sanctioning him, a "desperate" US government was putting "a permanent closure on diplomacy."

Decadeslong hostility between Iran and the United States has already seen numerous individuals on both sides falling in the sanctions lists. But Trump's new executive order transcended the extremes by targeting Iran's supreme leader and his office in an effort to deny them access to financial resources. Rouhani dismissed the unprecedented ban as "shameless" and "idiotic." In his argument, Khamenei was not merely an official in Iran, but rather "a religious figure and a spiritual leader" revered and followed by many in the Islamic world and in such countries as "Lebanon, Syria, Iraq, Afghanistan" and elsewhere.

Whether or not symbolic, the new sanctions have already sparked social media debates on Khamenei's personal wealth. Many are unearthing a 2013 Reuters report, which estimates Khamenei's wealth at $95 billion. The claim remains widely challenged and has yet to be backed by official confirmation, but it has offered room for fresh attacks on a leader who has been promoting a modest lifestyle as a religious conviction in his teachings.

Addressing that issue in particular, Rouhani expressed his unequivocal support for Khamenei and once more brought the US ban under question, noting that "unlike other world leaders," Khamenei had "nothing in foreign bank accounts to be frozen" and his assets never exceeded a "humble house and a Hosseinyah" (a congregation hall used by followers of Shiite Islam for religious mourning ceremonies).