As Europeans continue to let it down, Iran is increasingly focused on its "Look to the East" doctrine, grabbing every chance to boost trade with China, India and Japan. 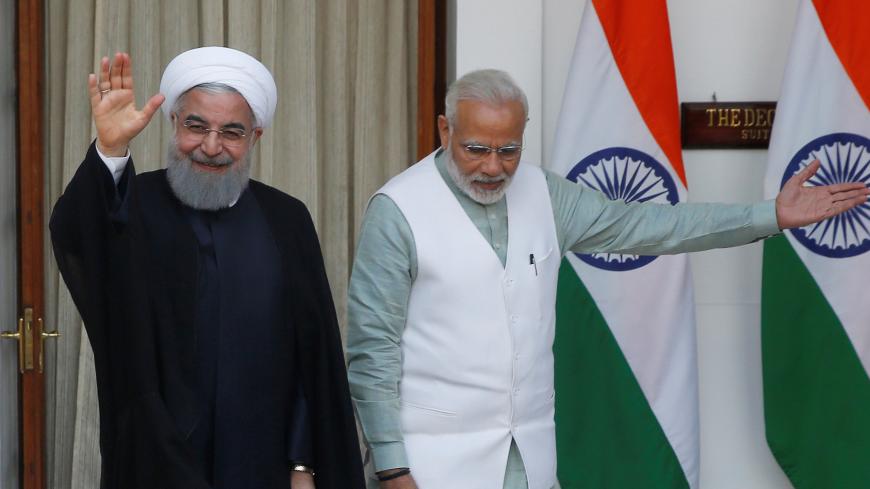 Britain, France, Germany and the European Union — the European signatories to the Joint Comprehensive Plan of Action (JCPOA) — have offered little beyond frustration to Iran, which had been expecting them to provide the promised economic dividends of the accord in the face of US pressure that has been mounting since President Donald Trump's withdrawal from the deal in May 2018.

Increasingly disappointed, Iran has sought alternatives by trying to materialize its "Look to the East" doctrine, which seeks deeper ties with Asia's three leading powers, namely China, India and Japan.

The policy has been manifested in a recent diplomatic frenzy, which has seen Iranian Foreign Minister Mohammad Javad Zarif sitting down with top officials in the three countries. Within that same framework, Iran is also busy preparing to host Japan's prime minister June 12-14 as Tehran struggles to find new windows of opportunities and to keep the existing ones open.

From a geo-economic standpoint, Iran's foreign trade in the past decade has witnessed a growing tendency toward Asia. This is explained partly by the sweeping emergence of China and India in the global economic arena as well as the pressure Iran has been facing as a result of Western sanctions. Over 60% of Iran's crude has generally been destined for Asia. Of that, the bulk has gone to China, India and Japan. Lack of access to the US-led global financial system has also driven Iran toward more imports from Asian countries with transactions increasingly based on local currencies rather than the US dollar.

China tops the list of the Islamic Republic's trade partners, accounting for 20% of Iran's total foreign trade volume. Beijing's share has surpassed that of the entire European Union. As for India, the trend has been similarly booming. In the past year alone, Indian exports to Iran showed a 212% growth, according to Iranian customs figures.

Ever since the US withdrawal from the JCPOA, the three Asian countries have found a special status in Iran's economic diplomacy. Unlike European countries such as Greece and Italy, the three continued buying Iranian oil until the expiration of the US sanctions waivers.

Figures are also very telling about the crucial role China, India and Japan have played in maintaining the flow of Iran's oil exports. Of the 930,000 barrels of Iranian crude produced per day between November and March, the three countries bought 740,000 . After the termination of the US sanctions waivers, Japan halted its purchases, but China defied the ban, defending its imports as "legitimate and lawful." India, which also stopped its purchases, is reportedly looking into buying a reduced amount of oil under the reelected government of Prime Minister Narendra Modi, which was sworn in May 31.

It appears that China and India remain the only major partners that can secure Tehran at least a minimum level of oil income as the geo-economics play out, and Japan would like to resume Iranian oil imports. It seems that Iran is relying on China and India, as opposed to European countries, to help keep it connected to international markets and alleviate the US "maximum pressure" campaign.

China is Iran's key political ally in Asia and the level of political ties Tehran maintains with Beijing is way above that of New Delhi and Tokyo. The intensifying US-China trade war and rivalry have also created further ground for increasing cooperation between Iran and China, which share much in common when it comes to issues involving the United States. Still, Iran may have legitimate concerns that a possible settlement of the US-China trade war will do Tehran more harm than good. Likewise, a US-Iran rapprochement is fueling worries for Beijing, which could have adverse impacts on its relations with Tehran.

When it comes to India, Iran is a strategic partner. Tehran grants India access to Afghanistan and Central Asia. As a neighbor of India's archrival Pakistan, Iran is a regional player that could affect the crisis in Kashmir. More importantly, Iran's strategic southeastern port of Chabahar is being exclusively operated by India. All that has made cooperation with Tehran tempting enough for New Delhi. Meanwhile, conscious about its own strategic importance, Iran is seeking to sell more oil to India, setting the payment process in local currencies. Put simply, Iran and India are already in an unwritten agreement that could be termed as "Chabahar for oil."

But the third country, Japan, is the United States' top Asian ally. Tokyo normally aligns itself with US decisions on matters with major international strategic implications. Despite differences with Washington over the JCPOA, Tokyo followed Trump's sanctions on Iran, immediately halting oil imports after he refused to extend the sanctions waivers. Yet what distinguishes Japan from the other two is its 90-year-long cordial diplomatic ties with Iran, making it a potential mediator capable of easing Washington-Tehran tensions. Shinzo Abe's upcoming visit will mark the first trip by a Japanese prime minister to Iran following the 1979 revolution. Tokyo is hoping to utilize the amicable past for fruitful and genuine mediation.

With Iran setting its sights on Asian partners to boost its foreign trade as romanticism about Europe proves a failure and the troubled relations between Tehran and Washington only exacerbate, the three Asian powers will increasingly play an important part in the Islamic Republic's economic diplomacy. Indeed, the systemic eastward shift of global power may affect Iran more substantially than others, leading to a gradual replacement of Europeans in the Islamic Republic's foreign policy with Asians. As those bonds continue to strengthen in the years to come, Beijing, New Delhi and Tokyo are likely to jostle Berlin, London and Paris in Iran's foreign policy road map.