Intel: How Russia is trying to calm Turkey-Syria tensions

Russia announced today that it had helped negotiate a cease-fire in rebel-controlled Idlib province this week as rising tensions between Turkey and Syria threaten to escalate into open conflict. 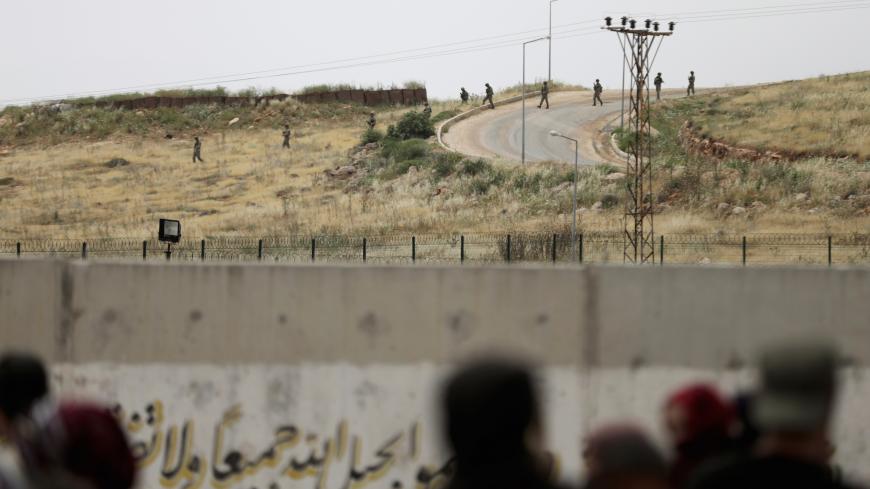 Turkish soldiers walk at the Atmeh crossing on the Syrian-Turkish border, as seen from the Syrian side, in Idlib governorate, Syria, May 31, 2019.

Russia announced today it has helped negotiate a cease-fire in rebel-controlled Idlib province this week as rising tensions between Turkey and Syria threaten to escalate into open conflict.

"On the initiative of the Russian side, with the mediation of Russia and Turkey, an agreement was reached on a complete cease-fire regime to be established in the entire Idlib de-escalation zone,” announced Maj. Gen. Viktor Kupchishin, head of the Russian military's Reconciliation Center in Syria. “As a result, the number of attacks from illegal armed groups [is expected to decrease].”

Moscow reports there were 12 shelling attacks in northwestern Syria on Tuesday and only two on Wednesday after the cease-fire went into effect at midnight. The Syrian army has reportedly adhered to the agreement and did not retaliate.

Why it matters: In the past few months, Idlib has become a significant humanitarian concern and a major sore point between Russia and Turkey. The Russian strategy combines military strikes, diplomatic pressure and intense back-channel talks in trying to get Turkey to deliver on its commitments made in Sochi last September to help separate “moderate opposition militants” from “terrorist elements” linked to former al-Qaeda affiliate Hayat Tahrir al-Sham and other militant groups that hold sway in Idlib.

Dismissive of Western attempts to exert pressure on Moscow and Damascus to halt their bombing campaign against Idlib militants that began in April, Russia views a deal with Turkey as the only viable way to settle the matter. Several rounds of consultations between the two countries have reportedly produced what Russia is now branding a cease-fire agreement. While it remains to be seen whether the deal can hold, it may pave the way for more robust joint Russian-Turkish cooperation in the area.

The devil in the details: Despite the Russian announcement, Reuters reports intensive shelling of the countryside of southern Idlib and northern Hama continued Wednesday after the cease-fire was supposed to take effect. In addition, the Russian military did not mention a duration term for the cease-fire — something Moscow usually negotiates — indicating Moscow sees the agreement as a temporary measure to clamp down on the spiraling violence as Russia and Turkey try to negotiate a more comprehensive deal.

For Damascus, the primary political and military goal of the Idlib campaign is to regain control of one of the last opposition strongholds and a pocket of terrorism. For Moscow, however, there are more layers to the goal.

On the military front, Russia is tasked with helping Assad get what he wants without upsetting a fragile balance with Turkey; politically, Moscow wants to capitalize on its mediation role to further boost relations with Ankara. In this respect, President Recep Tayyip Erdogan’s statement on Wednesday that Turkey had already purchased S-400 missile defense systems from Russia to be delivered in July was a reassuring sign for Moscow that disagreements over Idlib have not affected other critical bilateral tracks.

What’s next: For now, despite the latest reported shelling, the overall intensity of the Syrian army’s offensive appears to have diminished. Russia too has reportedly halted its air strikes, while diplomatic pressure from Moscow on the need “to exterminate terrorists” has given way — yet again — to the need “to separate the moderates from the terrorists.”

The cease-fire process, however, is politically fraught and always vulnerable to spikes in violence, including against civilians. Russia, it appears, is increasingly on the hook to deliver to all sides according to their respective needs.