An unexpected message from Abdullah Ocalan, who is serving a life sentence for treason, urged Kurds to stay “neutral” and could tilt the outcome in a bitter campaign for control of Turkey’s biggest city. 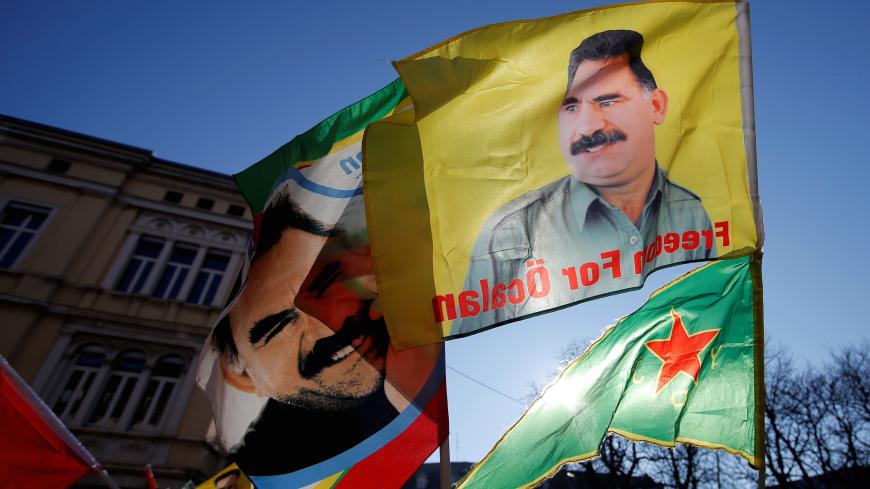 Pro-Kurd protesters hold flags with portraits of jailed Kurdistan Workers Party (PKK) leader Abdullah Ocalan as they take part in a demonstration in support to him in Strasbourg, France, Feb. 16, 2019. - REUTERS/Vincent Kessler

ISTANBUL — Jailed militant leader Abdullah Ocalan has called on the main pro-Kurdish political party to remain “neutral” in Istanbul’s mayoral election in what was widely seen as an entreaty to abandon its support for the opposition candidate and help President Recep Tayyip Erdogan’s party retain control of the city.

But the left-wing Peoples’ Democratic Party (HDP) signaled it would continue to back Ekrem Imamoglu, who narrowly won the mayorship March 31 before electoral officials agreed with his opponent’s claims that technical irregularities required a do-over vote, scheduled for Sunday.

The surprise entry of Ocalan into the battle for Istanbul illustrates how crucial the HDP’s estimated 1.2 million voters are to the election’s outcome. Imamoglu, from the Republican People’s Party (CHP), credited Kurds for helping him narrowly beat his rival, Binali Yildirim of the Justice and Development Party (AKP), the first time.

In a series of tweets, the state-run Anadolu news agency late Thursday quoted from a purported statement from Ocalan calling on the HDP to sit out the vote. Ocalan, reviled by most Turks for leading the armed Kurdistan Workers Party (PKK) until his capture in 1999, has been banished from the public sphere for years.

More than 40,000 people have been killed since the PKK took up arms in 1984, and the group is listed as a terrorist organization by Turkey, the United States and Europe. Ocalan is serving a life sentence for treason on an island in the Sea of Marmara.

Ocalan reportedly issued his call in a letter given to his lawyers who visited him Tuesday — the same day the HDP’s former chairman, Selahattin Demirtas, had sent a tweet from another prison some 150 miles away, saying Kurds should back Imamoglu because of his pledge to bridge the divides that have riven the country under Erdogan.

The lawyers only released Ocalan’s statement on Friday after pro-government media published images of the handwritten letter. In it, the 71-year-old guerrilla commander said: “The concept of a democratic alliance, embodied by the HDP, [means it] should not become a party to nor bolster the current election debate. The historical importance of the democratic alliance means it does not engage itself and insists upon its neutral position in elections.”

In response, the HDP’s joint leaders, Pervin Buldan and Sezai Temelli, said in a statement the HDP would not alter its strategy and alleged Erdogan had “unethically leaked” the letter in a “desperate” bid to recapture Turkey’s largest city from Imamoglu.

Buldan and Temelli took special care to say the HDP was adhering to the “third way” Ocalan’s letter urged it to follow to avoid appearances of a split. But they also noted that Ocalan, held mostly in solitary confinement, was limited in his ability to fully express his views.

For his part, Erdogan said the letter revealed a power struggle between Ocalan and the charismatic Demirtas, a human rights lawyer who helped attract non-Kurds to the HDP before he was jailed in 2016 on charges stemming from his political speeches. Erdogan suggested the HDP was more closely aligned with the PKK than Ocalan, even though Ocalan founded and leads the rebel group.

The HDP says it has no direct links with the PKK and has called on Turkey and the rebels, mainly based in northern Iraq, to negotiate a resolution of the three-decade conflict. The party has long argued Ocalan occupies the central role in finding an end to the insurgency.

Kurds, faced with a choice between heeding the political party or Ocalan, who has attained almost mythic status among nationalists, are most are likely to follow his guidance, said Soner Cagaptay of the Washington Institute for Near East Policy.

“Ocalan has immense gravitas over the Kurdish nationalist movement in Turkey … and [his letter] could deliver Yildirim the election by swinging a large enough bloc of Kurdish voters,” Cagaptay told Al-Monitor.

“Ocalan would like to become the interlocutor for the Kurdish issue again, figuratively sitting across the table from Erdogan,” he said, adding that he may also be acting out of personal interest, possibly in exchange for an improvement in the conditions of his incarceration.

Erdogan has long vowed he would never reopen peace talks after his previous attempt to end the conflict collapsed in 2015, unleashing the most intense fighting in two decades.

Inserting Ocalan into the campaign signals a dramatic shift in the election as the ruling party fights to hold on to the powerful post of Istanbul mayor, which it has controlled since 1994. Erdogan alienated Kurdish voters ahead of the March vote by calling the HDP “terrorists” and suggesting its tacit alliance with Imamoglu's party threatened the survival of the nation.

But with most opinion polls showing Imamoglu ahead by 2 percentage points or more — compared with his winning margin of just 0.17% in March — the government has made overtures to win back Kurds, including a Yildirim campaign stop in the mainly Kurdish city of Diyarbakir and allowing Ocalan visits with lawyers and family members.

Meanwhile, the front-runner in the race for mayor expressed astonishment over the turn of events. “I’ve never in my life seen these kinds of asymmetric acrobatics,” Imamoglu told reporters.