The World Health Organization and Yemeni health officials are offering an oral cholera vaccine in Yemen, but some Yemenis are suspicious of the vaccine. 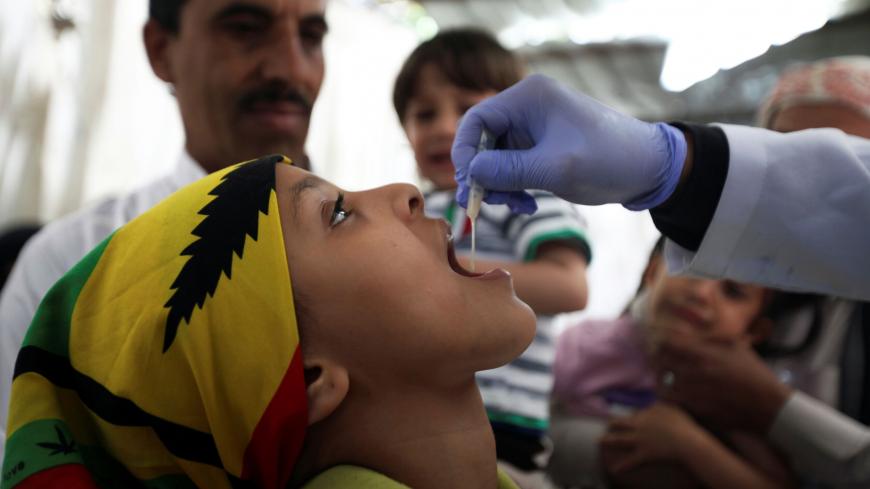 SANAA, Yemen — When she heard the voice over a speaker outside her home in eastern Sanaa, Fatima Hussein hurried to the nearest health center the morning of April 30. She had been hospitalized with cholera five months ago, she said, and feared the disease.

“I heard the speaker on the taxi, so I am here because I can’t afford to be infected again,” she said.

The announcement was part of a campaign to raise awareness in Sanaa of an oral cholera vaccine (OCV). Local health officials worked with the World Health Organization (WHO) and UNICEF to get the word out, going door to door in the past week. They hoped to convince people to get vaccinated despite residents’ skepticism about the vaccine.

It is reported that the OCV is free of charge and all people Al-Monitor has met with have confirmed as much.

Ask people on the street about the vaccine and some dismiss it as just bacteria. Others say it is ineffective. Some are suspicious that something more sinister is at work, attributing the cholera outbreak to the Saudi-led bombing campaign and seeing the vaccine as part of the coalition’s plan.

Yet Fatima, an internally displaced person in her 70s, and her four sons, as well as their children, had not gotten vaccinated because the campaigners had visited their home while they were all at work. Once she heard the speaker that blared from a taxi parked at al-Fawares Government Medical Complex's entrance, she responded immediately.

The speaker could still be heard in the crowded corridor of the complex. Fatima said the medics gave her a card verifying her vaccination. It was her first.

On April 30, the WHO and UNICEF announced that the OCV campaign — which initially ran from April 24-29 — had been extended for three more days with the aim of reaching 1.2 million throughout Sanaa in the Shoob, al-Wahada and al-Sabeen districts.

“The OCV campaign team begins work at 8 a.m. and ends at 1 p.m. But some team members continue working until 4 p.m.,” Hameed al-Hammadi, director of al-Fawares Government Medical Complex in the Shoob district, told Al-Monitor from the complex, which was crowded with children and their parents who came for vaccinations.

On April 30, the WHO tweeted that the OVC campaign in Sanaa reached more than 842,000 people on its sixth day. “This comes in continuation of WHO efforts with its partners to prevent future comeback of #cholera in Yemen," the tweet read.

Yet the WHO had earlier announced that 1.6 million would be targeted in Sanaa's three districts. The three-day extension of the campaign was announced amid a notable absence of media campaigns.

Maeen al-Qumaish, director of the government-affiliated health bureau in Shoob district, confirmed the extension of the OVC campaign, saying there is no exact figure of the targeted civilians in his district.

“Our office was informed there are 376,000 people to be targeted by the OVC in Shoob,” Qumaish told Al-Monitor by phone. Al-Monitor found his office closed around 11 a.m. Qumaish said he and his employees were on field visits.

Since Qumaish's figure seems so low in his district, Al-Monitor showed him the WHO figure that stands at 1.6 million people. “We had received some schedules citing that over 550,000 people in Shoob district will receive the vaccine,” he said, pointing out that this figure, which was sent to him by unnamed sides, does not seem tangible.

The campaign awareness, according to Qumaish, should have been conducted three weeks ahead of the campaign — which is not the case now.

“Sensitization is the first line of success at any healthy workforce,” Qumaish responded when asked about his office's role toward civilians' claims. He pointed out that it is normal to hear some people dismiss the vaccine as a bacteria.

“In big campaigns, such small things happen. We find it at any vaccination campaigns, and it comes out from small groups,” Qumaish said.

“Awareness-raising campaigns in this period are very low,” Hammadi said. He said his team is working on persuading uneducated families that cholera is a deadly epidemic and that all family members should be vaccinated. Otherwise, if a member remains unvaccinated, she or he may transmit it to the rest of the family.

According to Hammadi, in a maximum of two months, another OCV campaign will be executed for a period of two years. It will constitute a follow-up campaign for the current one, he added.

Alyia Ali Abdul-Qadhi, a 20-year-old medic, gave Fatima the cholera vaccine. She said she spent World Immunization Week, celebrated the last week of April, in the field, going door to door in Shoob district to administer the OCV.

“This campaign has been successful, achieving a vaccination rate of over 75%,” Abdul-Qadhi told Al-Monitor. “Some families have low sensitization. They say the vaccine is not good, or it is not stored appropriately.”

Abdul-Qadhi said families affected by the war and instability have claimed that this vaccine will push their children to join the Houthis on the battlefield, while others believe it is a poisonous vaccine donated by the United States. “You will find each family has its own excuse preventing it from taking the vaccine,” Abdul-Qadhi said.

“Some mothers claim it is something that will lead their children to go to the battlefield. They would tell us: ‘If our child wakes up in the morning healthy and not asking to join the battle, then we will pray for you,'" Abdul-Qadhi said.

On April 24, the minister of health in the Houthi-run government, Taha al-Mutawakel, inaugurated the OCV campaign at al-Sabeen Hospital by taking a dose of the vaccine himself, along with officials and representatives of the UN, WHO and UNICEF.

Hadri declined to provide the exact date for the first period, as he was not spokesman at the time, but said the second period was on June 13, 2018. He pointed out that there was no ban from the side of Mutawkel. “Admission of OCV took place one month after Mutawkel was appointed as a health minister [on May 12, 2018],” he said.

“There are medics affiliated with the Health Ministry who refused to be vaccinated,” Abdul-Qadhi said, adding that it was easy to persuade some uneducated people to take the vaccine after explaining the dangers of the disease.

“If someone — whether a staff within the Health Ministry or not — has not had the vaccine, for whatever concerns, that is up to [his or her] culture, but not due to the vaccine itself,” Hadri said.

“Those [in the ministry] who refused to take the vaccine are limited to around two to five people and I don't know their names. This is not a large number [if you compare two to five] to the 48,000 staff within the Health Ministry across Yemen,” he added.