The war in Yemen is showing no signs of ending, and as this most violent period of its modern history drags on, young children are as much at risk to disease as to militant violence. 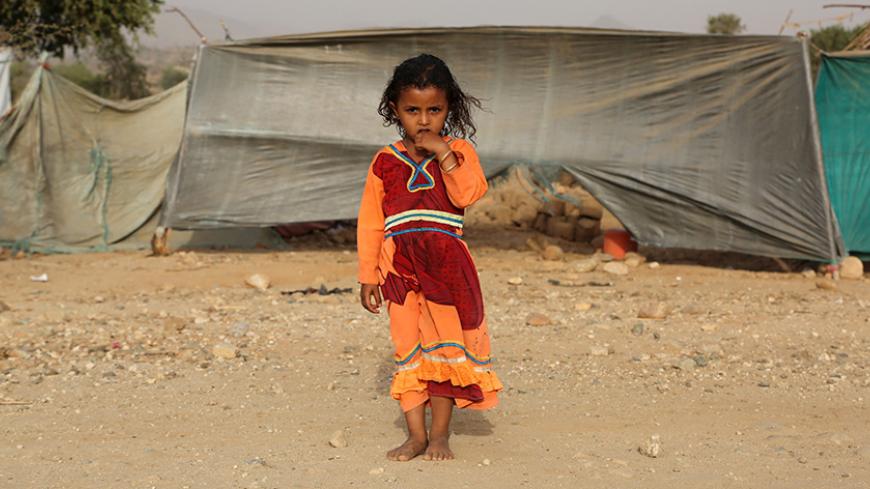 A girl stands outside her family's hut at the Shawqaba camp for internally displaced people who were forced to leave their villages because of conflict in the country, Hajjah province, Yemen, March 12, 2016. - REUTERS/Abduljabbar Zeyad

SANAA, Yemen — Yemen's children are paying the price of the civil war that began there in September 2014. They are dying daily from preventable conditions like diarrhea. In times of war, children lose their schools, houses and healthy food, and suffer from diseases caused by malnutrition and for which they are unvaccinated.

On Dec. 3, UNICEF revealed the emergence of measles cases among Yemeni children. The disease, which had disappeared years ago in Yemen, had resurfaced. UNICEF's spokesman in Yemen Ahmad al-Asaadi told Al-Monitor, "Children have been diagnosed with measles in Saada, al-Mahra, Umran and Hadramout governorates.” He added, “There are 37 confirmed diagnoses of measles and 268 suspected cases, in addition to three deaths in Saada, al-Mahra and Hadramout as a result of the condition.”

Ashwaq al-Ashaari, the director of the vaccine department at Moeen Medical Center in Sanaa, told Al-Monitor that the measles vaccine is available. Asked whether the center had seen measles cases, she said, “In November 2015, we treated two infected children and they were referred to the Epidemiological Surveillance Center in Sanaa, which is affiliated with the Ministry of Health. This was not due to the lack of vaccines, but rather to the family’s negligence.”

But there are even worse dangers than measles. A Dec. 13 UNICEF statement noted that one Yemeni child dies every 10 minutes due to malnutrition and preventable diseases like diarrhea. It read, “Malnutrition among Yemeni children is at its highest level ever and unequaled in the world. Epidemics like cholera and measles are spreading. "The lack of operational health facilities has allowed disease to spread among children.”

Already classified by the World Bank as one of the poorest countries of the Arab region, Yemen's situation worsened after Houthi militants took control of Sanaa on Sept. 21, 2014. Famine and disease soon spread with the civil war.

Human rights activist Rayan al-Shaibani told Al-Monitor, “The UNICEF figures are dangerous and we should not ignore them. The organization gets its information about the situation from field researchers who conduct interviews. Nevertheless, I think that there are more child victims because the organization cannot reach everyone in a highly reserved society that stigmatizes poverty.”

She added, “The future of children who have left school is also at risk. They do not receive sufficient food and vaccines to maintain their quality of life. Also, according to some information in the media, the Houthis are trying to amend school curricula for children to contain new sectarian information.”

Yemen's health system has collapsed almost completely, and US attempts have failed to bring the fighting parties to the negotiation table. The ongoing conflict has killed thousands of people and created one of the worst humanitarian crises ever.

The children whose families have been killed in the war are at risk on multiple fronts. On Nov. 22, in Dhamar governorate, 130 kilometers (80 miles) south of Sanaa, Al-Monitor spoke to Mohammad al-Samawi, a nine-year-old begging with his five-year-old brother near a restaurant. He said that his father had died while fighting alongside Houthis in an armed clash with supporters of President Abed Rabbo Mansour Hadi in early 2016 in the town of Bzommar, in Dhamar governorate.

He said that after his father died, “Houthi militants brought us weapons and told us that he had been martyred. Then they left. Six months later, my mother who mourned my father daily, died. I am now begging in the streets during the day, and at night I go back home.”

Neither Mohammad nor his brother go to school, and they are at high risk of enlistment into militias as well as sexual exploitation.

The Houthis, the pro-government forces and al-Qaeda in the Arabian Peninsula (AQAP) are all known to be recruiting children. The conflicting forces are taking advantage of impoverished and vulnerable children across Yemen. In January, UNICEF pointed out that militants fighting in Yemen have recruited children who are barely 10 years old to join them on the battlefield.

In a June 2 statement, the United Nations declared that 762 cases of child military recruitment have been registered in Yemen. In 72% of those cases the recruiters were Houthis, 15% were recruited by Hadi’s forces and 9% were recruited by AQAP. With every passing day, the numbers are increasing.

Yemen is going through the most violent period of its modern history, and its children’s lives are threatened. The next generation will be a deeply wounded one, scarred not only by illnesses and other problems that have recently surfaced, but also the long-lasting psychological repercussions of the war.