In an interview with Al-Monitor, the head of the UN Development Program discusses his agency’s work in conflict zones like Syria and the future of multilateralism. 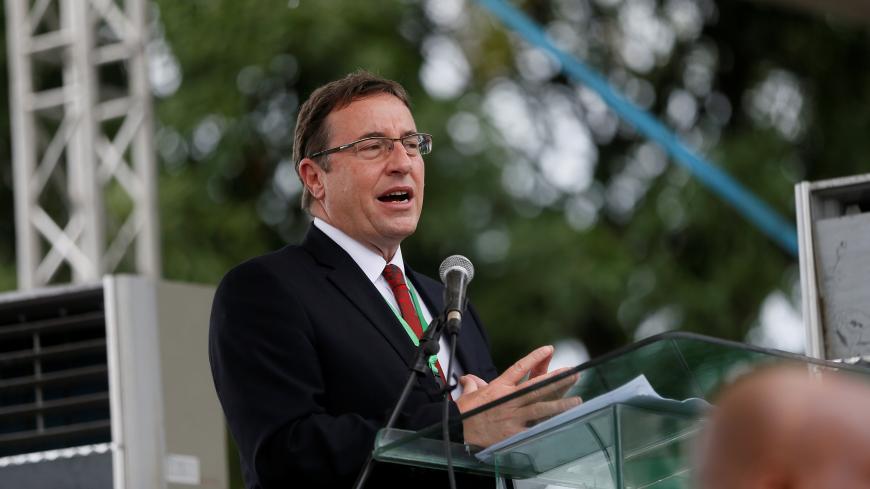 UNEP director Achim Steiner speaks in Bodo, Nigeria, during the start of an exercise to clean up pollution in Ogoni land, Nigeria, June 2, 2016. - REUTERS/Afolabi Sotunde

ISTANBUL — With much of the Middle East and beyond in the grip of prolonged and violent crisis, the development community is increasingly compelled to work in the middle of war zones. Organizations like the United Nations Development Programme (UNDP), whose fundamental mission is to eradicate poverty, now find themselves trying to stabilize communities before the guns have even fallen silent.

Al-Monitor spoke with UNDP administrator Achim Steiner, who was in Turkey this week for a conference on plugging the gap in international development financing and to meet senior Turkish officials including Vice President Fuat Oktay and Foreign Minister Mevlut Cavusoglu.

In the following excerpts, which have been edited for clarity, Steiner describes his agency’s sometimes perilous but essential work in places like Syria, how the global refugee crisis continues to enflame tensions and the future of multilateralism amid a backlash against globalization.

Al-Monitor:  Does the international community fail to appreciate the role inequality plays in conflict? Can development mitigate violent conflict that is underway?

Steiner:  We underestimate and chronically underinvest in development as a way of averting crises and conflicts. It is in the failure of societies and their governments to deliver development opportunities, fairness, equity and rule of law that the seeds are sown for many of the tragic stories of the past 15 to 20 years in countries descending into violent conflict and falling apart.

[The UNDP] has had to learn to operate in the midst of conflict, when investing in development is a crucial pathway to recovery. That’s why well over 40% of our funding today is deployed in just 10 countries that are either in the midst of or emerging from conflict.

Humanitarian relief is essentially defined by a crisis moment. It is about saving lives, it’s not about long-term development. … But could we not invest a little more in recovery? We are learning how to do that without compromising the ability of the international community to draw on the willingness of countries to step up, sometimes at one month’s or one week’s notice, for [emergency] funding.

Sometimes budgetary rules in donor capitals preclude intelligent decision-making on the ground, and we need to change [this] because it is a missed opportunity, at times a waste of money and above all prevents us from delivering double benefits in the response we deploy.

Al-Monitor:  Can you give examples of recent development projects in places that are still in the throes of violence or just emerging from it?

Steiner:  In Iraq, we implemented one of the largest stabilization projects in the history of immediate deployment to help people return to their hometowns after fighting stopped. From the roughly six million people who had been displaced, within six months, 4.5 million of them had returned, because the Iraqi government and UNDP deployed a massive program of stabilization activities: reconnecting electricity, sewage, schools and health centers — the bare minimum for people to return and start rebuilding. That was more than 3,000 projects over a 36-month period, involving $1 billion.

In Yemen, the Stockholm Agreement [saw] the withdrawal of combatants from the Hodeidah Port, which is vital to bring in food and medicine. Within 24 hours, as part of the UN mission, UNDP deployed its experts and employed 4,000 people to begin restoration of the port and demining and creating work opportunities for a population to believe that there is some reason to hold on to this tenuous moment.

Right now in in Libya, we are continuing to work in parts not currently affected by fighting, again with stabilization measures. At the heart of this lies our conviction that the more people can see the value of a nation-state — of a government being functional — the less likely they are to either join political and violent extremism or to basically give up.

Al-Monitor:  What about the role for development in Syria while the war still rages?

Steiner:  [With] the cessation of violence and as the action of combatants diminishes, the developmental phase becomes critical. People are beginning to return, and to succeed, basic functioning of infrastructure is fundamental for a desperate population to have hope to return.

The UN is still focused on the provision of humanitarian support, simply because among the member states, there is disagreement about whether the UN can engage in a more significant manner. There is a distinction between major rehabilitation of infrastructure and what we, as UN entities, are able to do. This is essentially in the rural economy: small-scale initiatives that allow people to reestablish livelihoods, whether it is connecting lighting or helping farmers access better infrastructure.

Across the polarity of the Syrian conflict, there are diametrically opposed views. There are countries that feel that without a political settlement [and] engagement on their part, finance is not an option. And those working with the Syrian government feel that this is a critical moment for more engagement. Right now the lines are very clearly drawn, and the UN has to acknowledge the authorized environment within which it operates.

For the UN, the issue of refugees [means] looking after them, protecting, feeding and giving them some kind of intermediate stability. On the other end of the spectrum is always the search for a political solution to get back to a state of peace. … Member states [need] to enable the UN to be part of this critical moment in Syria.

Progress is too slow and frustrating to all parties and, above all, prolonging a very tragic episode in the lives of more than 10 million Syrians, never mind those who live in the house where they have always lived but under conditions they would never have imagined 10 years ago.

Al-Monitor:  What concerns do you have about the extended Syrian refugee crisis in countries that are hosting them?

Steiner:  Conflicts are increasingly protracted, making a return very difficult and the political resolution can also take years. People will sometimes spend a decade or more being hosted. When refugees essentially become permanent in the perception of host communities, this creates tension, especially if the infrastructure remains under stress. The United Nations has to be part of the effort of reducing a sense of unfairness, especially for people who feel that they have been very generous.

I visited the outskirts of Beirut, where the UNDP invested in upgrading municipal facilities. Schools work in three shifts in order to provide educational services. The queues outside health centers have become so long that people have to use private health care. That can create resentment.

The UNDP [can] invest in skills development to create better opportunities for people to participate in the labor market, both for refugees and host community citizens. In Turkey, it was about learning the language or skills training for women to become entrepreneurs.

Al-Monitor:  Are countries still interested in collaboration in international development in an age where multilateralism is under attack?

Steiner:  We live and have lived through many crises, and countries can recover and return to being proactive members of the international community. The UNDP is active in 170 countries, and we work by invitation … and certainly do not sense we are an unwanted partner.

People often underestimate how much the UN is the backbone of a community of nations being able to collaborate, to trade, to travel to each others’ airports. We have two realities coexisting that is challenging to the UN and multilateralism: the critique of globalization and the very practical and real momentum toward ever greater integration.