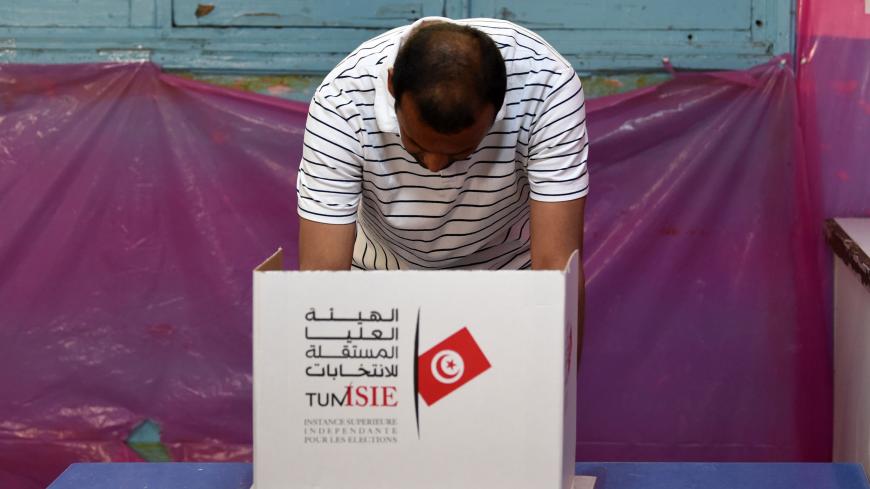 A Tunisian man fills out his ballot in the municipal elections at a polling station in Tunis, Tunisia, April 29, 2018. - FETHI BELAID/AFP/Getty Images

TUNIS, Tunisia — Independent politicians and activists announced April 17 the formation of the National Union of Independents to run in the legislative and presidential elections scheduled for October and November 2019, respectively.

The champions of the initiative are banking on the triumph of the independents in the May 2018 local elections, Tunisia's first. They won nearly 33% of the vote, beating out the Ennahda Movement, which obtained around 30%, and Nidaa Tunis, which won nearly 22%.

In an April 17 press conference, the alliance stated that Tunisians have lost trust in the politicians who failed to keep their promises and have proven unable to compete with Ennahda, which dominates the political landscape.

Speaking to Al-Monitor, Moez Baraoui, a member of the union and founder of the Tunisian Association for Integrity and Democracy of Elections, said that the independents have a good chance to win the presidential and legislative elections after having won the municipal race in 2018. He indicated that the lack of trust in the ruling parties and their failure to run the country’s affairs give the independents a chance to take the helm of the political landscape.

Baraoui added, “We will run in all of the districts in all the governorates in the upcoming legislative election. We will also join the presidential race, though [the union] has not agreed on a particular candidate so far.”

Mukhtar Obeidi, a member of the union who works as an accountant for the Finance Ministry, explained that the union seeks to unite independents behind a single national list in the 2019 elections. He pointed out that talks have been ongoing about attracting more civil society figures and associations.

Speaking to Al-Monitor, he called on the Independent High Authority for Elections to prevent parties from paying for votes and indicated that the union will not engage in any alliance with any of the political parties, regardless of their orientations, in the future legislative and presidential races.

Mohamed Bin Salem, a top Ennahda official, told Al-Monitor, “The independents have proven to have political weight and to be a strong rival to the ruling parties, namely Ennahda and Nidaa Tunis.” Nevertheless, he expects Ennahda will continue to lead the political landscape in the future elections.

In contrast, top Nidaa Tunis official Elmanji Harbawi called on the political parties to review their discourse and to take steps to address the concerns of Tunisian citizens. He explained that the independents can offer no guarantees nor comprehensive political and economic programs and said, “I do not think that the independents will achieve surprising results in the coming elections.”

Mohamed Hamdi, secretary general of the opposition Democtatic Current, which made strides in the municipal elections, said that the ruling parties failed to fulfill their electoral promises of eliminating poverty and unemployment. He expects the failure to cost them support in future legislative and presidential elections.

Hamdi told Al-Monitor that the influential parties will find it even easier to attract the independents once they win, as happened with the parliamentary blocs in the 2014 elections.

Tunisian electoral law does not prohibit movement between political parties. Multiple parliamentarians have resigned from one parliamentary bloc and joined another, thus weakening some blocs and helping others. For instance, deputies for the Free Patriotic Union joined Nidaa Tunis in October 2018.

Abdel Jabbar Maddouri, a political analyst and editor-in-chief of the Workers Party newspaper Sawt Achaab, told Al-Monitor that the independents are the main beneficiaries of Nidaa Tunis’ infighting and defections and from the accusations leveled against Ennahda of assassinating Chokri Belaid and Mohamed Brahmi of the opposition Popular Front in 2013.

Maddouri indicated that the unemployment rate — 15.5% in the third and fourth quarter of 2018, according to the National Institute of Statistics — and the protests that continue since the January 2011 revolution in all governorates against the high prices of fuel and basic goods have both weakened trust in the ruling class in general and ruling parties in particular.

He went on that the independents' alliance in the 2018 local elections delivered a strongly worded message that Tunisians have no trust in the political parties. Maddouri concluded that the elections in the coming months are more likely to bring about a change in the balance of power.