A rage room in Amman helps Jordanians cope with their frustration by smashing things in a safe space. 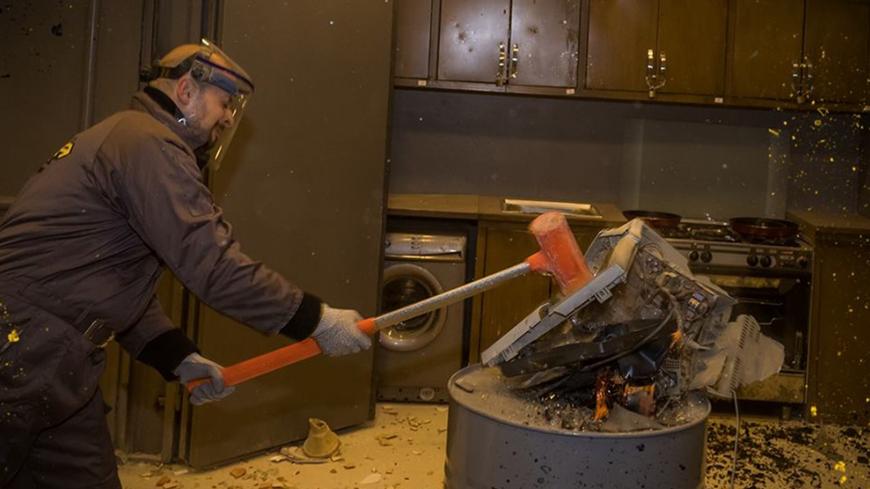 Start-ups and entrepreneurship
May 7, 2019

AMMAN, Jordan — Ahmed and Sana grab a hammer each and hit the office furniture in tandem. A few screens get broken, along with a printer, but no one is hurt, and once the room is in shambles both appear a lot happier.

The young couple are among those who unleash their rage at the Axe Rage Rooms, one of the new “in” venues in Amman, the Jordanian capital. The Axe Rage Rooms are the place to smash dishes and mugs, break electrical appliances and kick and slam furniture in rooms that resemble an office, a living room or a kitchen.

Ahmed, for example, chose a room that looks like an office to damage the furniture and take a swing or two at a computer and printer. “I really felt relieved after smashing all this,” he told Al-Monitor, confessing that the pressure of his jobs was driving him crazy on a daily basis.

The complex of rage rooms, located in the basement of a mall downtown, is the brainchild of Jordanian engineer Ala'din Atari, who understands well the magnitude of economic pressures and other sociopolitical factors in the daily lives of Jordanians.

“We provide a solution for frustrated people to let their anger out by smashing furniture, utensils and appliances,” he told Al-Monitor. The Axe Rage Rooms, opened in March 2019, enables the frustrated and the outraged to vent their anger without dealing with the remorse of breaking furniture, as they would if they were to break things in their own homes or offices.

Atari holds a degree in civil engineering from Hashemite University in Jordan but took jobs abroad, mostly in Gulf countries, in his early career. He came across wreck — or rage — rooms in the United Arab Emirates and thought that it would work just as well in Jordan.

“I thought about the project for two years and I decided to open several rooms. For instance, we have a Couples Room and the Office Room,” he said. In the Couples Room, a glass wall separates the couple who would throw things at each other without any risk of hurting the other or holler abuse that the other can't hear. Friends and family can be invited to watch. Customers can book a classroom in order to throw away books, notebooks, or a kitchen where they can smash glasses and plates. The rate varies from $17 to $21 per hour.

“I expected a good turnout, but I never thought it would be this much of a success,” Atari said. “We’ve been open two months and we get around 35 people every day. We get people from different age groups and social classes. Our customers include employees, couples, college students and so on. Interestingly, 65% are female.”

The space is designed as an underground house. Atari assures that adequate safety measures are in place and participants sign a pledge to abide by the safety requirements of wearing protective clothing, helmets, gloves and anti-cut shoes.

He is also quick to point out that he does not use new appliances. “We do not smash working equipment. We bring used furniture, broken electrical appliances, scrap items and damaged products; we then send the debris to recycling companies,” he added.

Lama Mouhayayb, an 18-year-old high school student, booked the Freestyle Room with her friends. “I came here out of curiosity and I wanted to try something new to let out my frustration,” she told Al-Monitor. “I felt by smashing things I let out all my stress and anger that the Jordanian youths feel on a daily basis.”

Jordanians suffer under difficult economic conditions. The unemployment rate, according to government spokesman Jumana Ghunaimat, reached 18.7%, amid major layoffs following the closure of factories and the loss of investments to other countries.

Professor of sociology Hussein al-Khuzaie, who teaches at a number of Jordanian universities, told Al-Monitor, “This wreck room is an effective way to get rid of anger. In sociology we call it anger management by letting off steam without hurting anyone. It is recognized by most European countries as well as Japan and China, where people break pots and dishes to vent.”

He added, “Such a practice is important for Jordanians — to release their anger and the stress they experience, be it in their daily lives or at work. I attended a course with a Belgian organization in Jordan on how to get rid of anger and control it in a number of ways, including by letting it out, indifference and relaxation. … We in Jordan need to train citizens on how to manage their anger.”

Even Atari enters one of the rooms after a long day’s work to let out some steam by smashing a few dishes, so he is in a better mood the next day to welcome the next group of angry Jordanians — who seem to be in constant supply.