Who cares about Israel’s polluted air?

According to environmental groups, one is more likely to die from pollution in Israel rather than by a rocket, terror attack and road accident combined. 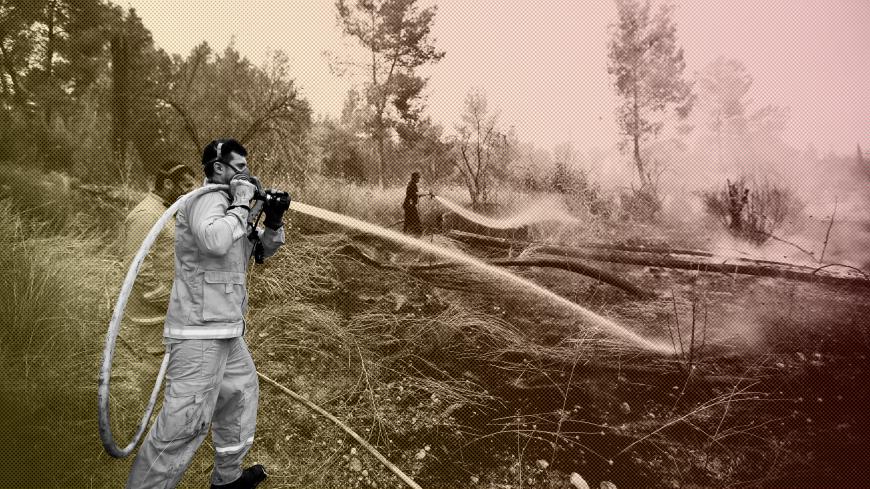 Firefighters put out a fire near Kibbutz Harel, which was damaged by wildfires during a record heatwave, Israel, May 24, 2019. - REUTERS/Ronen Zvulun

The current coalition talks that are now reaching their end were no different from previous rounds, in the sense that everyone wanted a “prestigious” portfolio — defense, justice or education. The head of the ultra-Orthodox Shas party, Aryeh Deri, was set to maintain his hold on the Interior Ministry, which is close to his heart. The ultra-Orthodox Yahadut HaTorah party demanded to retain its hold on the health portfolio. Moshe Kahlon insisted on keeping the position of finance minister. Acting Foreign Minister Yisrael Katz hoped to be a full-time foreign minister. Miri Regev sought an upgrade from the Ministry of Culture to the Ministry of Public Security. As always, the Ministry of Environmental Protection was at the bottom of the national political league. The current minister, Ze’ev Elkin, wanted to flee the office, but he crawled back after losing the Jerusalem mayoral race in October 2018.

On May 22, due to a combination of the traditional Lag b’Omer bonfires and heavy heat, the environmental issue made headlines. Newspapers reported Elkin’s call to the public to act responsibly and limit the number of bonfires, “for the sake of the environment and your health.” Deputy Health Minister Yaakov Litzman urged parents to “avoid endangering their health and that of their children by smoke, fire or exposure to environmental and health damage.” The head of the firefighting services issued a special order to curtail the extent of bonfires, and municipal inspectors increased their presence on the ground. The following day, news reports crowned the campaign a success. Pollution rose “only” a little over 11%. The Ministry of Environmental Protection was pleased with the rising public awareness of the issue and noted that a decline in pollution was recorded on Lag b’Omer in many areas of the country compared to previous years.

But what about daily awareness on the part of elected officials of environmental issues in Israel and on our planet? What is the government doing to clean up the air that Israelis breathe? According to a March 28 Globes article by the head of the Green Course environmental activist group, Mor Gilboa, figures indicate that the chances of dying of pollution in Israel are greater than the chances of dying of a rocket strike, terror attack and road accident combined. Gilboa added that some 2,500 Israelis die annually of pollution. Half of those deaths are due to polluting industries, and the other half to transportation-related pollution. Yet the government continues to allow polluting industries to operate in cities such as Haifa and Ashdod. According to official data, only three of the 35 member states of the Organization for Economic Cooperation and Development (OECD) were found to have higher concentrations of polluting particles dangerous to human health than Israel’s as of 2017: Poland, the Czech Republic and Mexico.

A May 6 report by the state comptroller attributes these shortcomings to the low fines imposed on polluters for endangering the health of the country’s residents. Most of the violations do not merit administrative or criminal enforcement and are handled, if at all, through regulation. The vast majority of the cases investigated between 2014 and June 2018 (some 77%) were closed without an indictment, and fewer than one-quarter ended in an indictment — a 1.7% rate of all the substantive violations that occurred in those years.

Energy researcher Amnon Portugali of the Center for Social Justice and Democracy at the Van Leer Institute accuses the government of encouraging energy production powered by natural gas, which is pollution heavy. In a conversation with Al-Monitor, Portugali referred to the annual report by the International Energy Agency, according to which, renewable energy sources, chief among them solar energy, constituted over 65% of new energy production in the world as of 2016.

“It is clear that the future lies in solar systems combined with energy storage batteries,” Portugali said. “However, it seems the Ministry of Energy has not heard about it.” According to Portugali, bidders for the construction of solar power farms in Israel demand less than 15 agorot (4 cents) per kilowatt-hour for the electricity they would generate, while the global price barely reaches 3 cents per kilowatt-hour. This price gap is strange, considering Israel’s great technological capacities. Portugali attributes this gap to Israel’s powerful gas lobby.

Either way, the national green energy plan approved in 2010 has evaporated from the government budgets for the coming years. The plan targeted the reduction of some 16 million tons of carbon dioxide emissions by 2020 and was designed to yield profits 15 times higher than the investment. For the sake of comparison, Morocco will produce 42% of its energy from renewable sources by 2020 and Germany is expected to reach a 45% level of renewable energy by 2030. Israel is the only OECD member state that does not set absolute targets to reduce greenhouse emissions and fails to budget this reduction in accordance with the 2015 Paris Agreement.

Gidon Bromberg, director of EcoPeace Israel, an organization of Jordanian, Israeli and Palestinian environmentalists, warns that unless decision-makers in Jerusalem get their heads out of the sand and participate in a regional environmental initiative, Israel will pay an unbearable ecological and political price.

Bromberg pointed out that Israel “has an interest in making the required regional adaptations for global climate change.” He noted that Jordan has overtaken Israel in the use of solar energy, adding that the sun could supply Israel with most of its daytime energy needs at a substantially lower environmental and economic cost than that of natural gas. EcoPeace is currently engaged in promoting an initiative to sell solar energy from Jordan to Israel and the Palestinian Authority in return for desalinated water from stations powered by green energy.

What is to be done to turn environmental protection into a prestigious issue and give it the place it deserves on the national agenda? The issue could be framed as an “emergency national plan for the protection of the heartland” and granted generous budgets, while the title of the next minister could be changed from the minister of environmental protection to the minister of environmental defense. Until then, Israelis can continue envying the remarkable achievement of the Green parties in the European Parliament elections. No Green party made it past the Knesset threshold at the April 9 elections.