Prime Minister Benjamin Netanyahu is destroying Israel's image as a democratic state in a shameless battle against the Supreme Court in an attempt to protect himself from indictment. 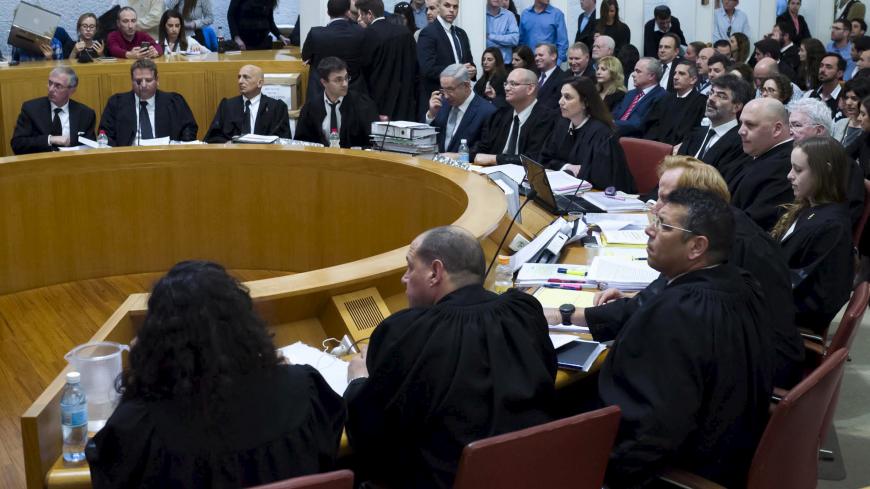 Israeli Prime minister Bejamin Netanyahu sits in the Supreme Court before speaking at a hearing on the legality of a government-approved deal to develop offshore natural gas reserves, Jerusalem, Feb. 14, 2016. - REUTERS/Jim Hollander

Some 200 million television viewers around the world watched Israel put its best foot forward on May 18 as reflected in numerous media reports on the finals of the Eurovision Song Contest and the clips accompanying the competitors’ performances. Despite Prime Minister Benjamin Netanyahu’s best efforts to put a spoke in the wheels of Israel’s Public Broadcasting Corporation (IPBC), the company managed to defeat the anti-Israel BDS movement. The world saw that Israel was not just a country full of masked settlers beating up elderly Palestinians and Israeli children seeking shelter from Hamas rockets. Just hours after Israel was presented with a priceless boost to its beleaguered image, however, the government took the opportunity to present the state’s ugly face at its weekly Cabinet meeting the following morning.

After offering brief congratulations to the singer Kobi Marimi, Israel’s Eurovision contender and 19th-place finisher, but not a single word of praise for the IPBC, Netanyahu went on to discuss efforts to assemble his fifth government. He expressed his hope that his potential coalition partners would soon “come to their senses,” meaning they would agree to settle for fewer senior ministerial positions than they were demanding in return for entering the coalition.

With the Eurovision stardust having settled, the old agenda began returning to the light, as reflected in world headlines and on leading television networks. Even the daily review of Israeli editorials issued by the Foreign Ministry in English as a service to foreign diplomats and media outlets included the following from the summary of an opinion piece in the widely read tabloid Yediot Ahronoth: “[The writer] wonders where all the Likud members who spoke out against an immunity law before the elections have gone.… They have been taken hostage by Netanyahu who can grant or withhold ministerial portfolios from them in his new government. They are running scared.”

Likud members have obviously been too afraid to criticize the campaign to limit the authority of the Supreme Court and to reject Netanyahu’s push for an immunity law amendment that would save him from possible indictment. There are several jurists, however, who are not afraid. More so, criticism by leading jurists against proposed government legislation designed to neuter the Supreme Court and turn the Knesset into an asylum for criminal suspects does not stop at Israel’s borders. Chief Justice Esther Hayut lashed out against such proposed laws at a conference she was attending in Germany. Maybe it was the lies that Netanyahu has been spreading in his bid to evade punishment for suspected corruption that led the judge to take off her gloves.

On May 13, Netanyahu had promised to push through three bills that he alleged the Supreme Court had overruled or delayed. He claimed to be acting to restore “the balance between the legislative branch, elected by the people, and the judiciary.” He was referring to bills allowing the expulsion of the families of terrorists, the death penalty for people convicted of terrorism and the deportation of Africans in the country illegally. The truth is that the Supreme Court has never adjudicated cases on expulsion or the death penalty for terrorism, and Netanyahu himself blocked proposed death penalty bills. The courts did block the deportation of illegal immigrants.

Just hours after Netanyahu spread these lies in a bid to justify his campaign to undermine the independence of the country’s top court, Hayut took the podium in Hall 600 in the Nuremberg courtroom where the trials of Nazi war criminals were conducted after World War II. Addressing a joint conference of Israeli and German jurists, Hayut underscored the symbolism of holding the event in the same hall where 16 German judges and lawyers stood trial for advancing the Nazi agenda of racial purity. Hayut reminded her listeners that the rulings from the historic Nuremberg trials had condemned the Nazis’ destruction of Germany’s judicial independence. The leaders of the Nazi party, she noted, understood that in order to implement their racial ideology they would have to mobilize the judiciary.

In a barely veiled reference to proposed legislation that would allow the Knesset to override Supreme Court rulings, Hayut remarked that the National Socialists had used legal tools — among them the “consent clause,” which granted the German government full legislative powers — to bypass the Reichstag as the legislative branch of government. “One of the universal lessons we should learn from the historical events I mentioned is that judicial independence, on the institutional and personal level, is one of the most important guarantees that the individual has an address to turn to to protect their rights,” Hayut said.

Hayut cited Alfred Witkon (1951-1980), the German-born chief justice who highlighted that throughout history, democratic regimes had on several occasions experienced the rise of fascist and totalitarian forces. These movements exploited the rights of freedom of expression, press and association granted by the state to conduct their own destructive activities. Her target was obvious.

As if to convey a message to Israelis indifferent to the contemptible actions of their politicians toward the judiciary and to pro-Israel Jews around the world, the chief justice pulled out an editorial by a leading [unnamed] Jewish newspaper published in February 1933. “Now that Mr. Hitler and his cohorts finally achieved the power for which they yearned so long,” the piece read, “they will not suddenly revoke the legal rights of Germany’s Jews.… They will be unable to do so due to various determining elements that rein in power and monitor it.” The mistake at that time, Hayut went on to say, was not to understand that existing institutions could be deprived of their powers and vitality and undergo a process of “adaptation” in order to anchor the “new order.”

There is nothing trivial about a chief justice of the Israeli Supreme Court or one elsewhere speaking out against lawmakers. To top it off, Hayut had “washed Israel’s dirty laundry in public,” like the human rights activists from Breaking the Silence and B’Tselem are often accused of doing. The media ruckus over the Eurovision contest had until recently drowned out the cry of Israel’s leading judges and jurists (though the tweet by the prime minister’s unruly son Yair claiming that Hayut had compared his father to Hitler managed to make headlines.) As former Deputy Chief Justice Elyakim Rubinstein remarked this week, “The Supreme Court is a strategic asset of the State of Israel.”

Regardless of whether Netanyahu succeeds in his bid to take control of the Supreme Court or whether a half dozen Likud Knesset members discover a sense of shame, the fight Netanyahu and his allies are waging against the rule of law has already inflicted heavy damage on “the only democracy in the Middle East,” as the prime minister proudly boasts of Israel. To quote the lyrics of the song Marimi performed at the Eurovision finals, “Nothing comes as easy as it goes.”