The mass rally last week against the anti-democratic legislation advanced by Prime Minister Benjamin Netanyahu does not reflect a change in the public opinion toward peace with the Palestinians. 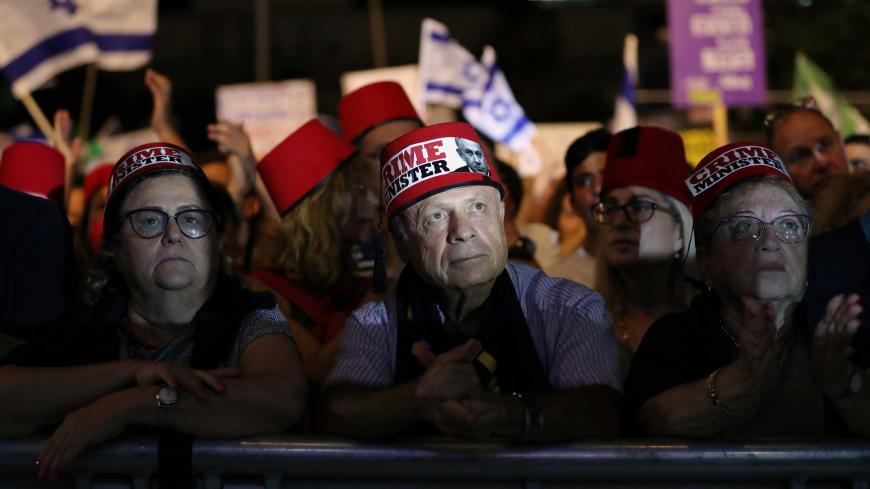 Israelis hold a demonstration against possible legislation reigning in the Supreme Court that could grant Prime Minister Benjamin Netanyahu immunity from prosecution if he faces corruption charges, in Tel Aviv, Israel, May 25, 2019. - REUTERS/Ammar Awad

The protest organized by opposition parties in the Tel Aviv Museum Plaza on May 25 was impressive. According to data compiled by one of the cellphone service providers, over 50,000 Israelis came to protest the plot by Prime Minister Benjamin Netanyahu and his associates to undermine the state’s democratic foundations. The speeches delivered by leaders of the Blue and White, Labor and Meretz parties, and by the head of the Arab Hadash-Ta’al list, were also impressive.

At the same time, the incitement against the country’s courts as reflected in several unbridled legislative proposals being promoted by Netanyahu and his allies has brought quite a few guardians of democracy out of their ivory towers. Supreme Court Chief Justice Esther Hayut took off her gloves. Retired judges lashed out at the proposed Override Clause that would allow the Knesset to override Supreme Court rulings and limit its authority. Philanthropists threatened to withhold funding for public institutions. Academics announced that they would start their classes with lectures on the meaning and importance of democracy. Pundits called for popular revolt and even for mass legal violations.

We have not witnessed such widespread public uproar since the trauma of Prime Minister Yitzhak Rabin’s Nov. 4, 1995, assassination. Then, too, tens of thousands took to city squares in protest. Then, too, it appeared that the anxiety over the fate of Israeli democracy would alienate Israelis from every politician and party identified, even remotely, with the radical nationalist camp that raised the assassin, Yigal Amir. Polls conducted at the time indicated that Rabin’s Labor party was recovering from the blows it sustained in the wake of a wave of suicide bombings, which intensified after the February 1994 assassination of Muslim worshippers in the West Bank town of Hebron in the Cave of the Patriarchs by an Israeli settler. Several months later, on May 29, 1996, exactly 23 years ago, Netanyahu kicked out Rabin’s temporary successor, Shimon Peres, from the Prime Minister’s Office in a hotly contested election.

The elections of April 9 did not topple Netanyahu. The assumption/hope that the severe pending indictments hanging over Netanyahu’s head would remove him from office and result in a regime change proved unfounded. Still, Netanyahu faced obstacles on his way to composing a government. Thus, he started promoting a bill for dissolving the Knesset and holding snap elections. On May 27, Netanyahu sent his new henchman, Knesset member Miki Zohar, to table a resolution dispersing the Knesset — the proposal was adopted by the Knesset at a first hearing. Head of the main Blue and White opposition party Benny Gantz demanded that President Reuven Rivlin entrust him instead with forming Israel’s next government given that Netanyahu had failed in his efforts to do so since the elections. “Netanyahu insists on holding on to his seat at any cost; he is the only obstacle to forming a national consensus government that can truly take care of all citizens,” Gantz said. If the Likud replaces Netanyahu as its leader, he added, “Such a government could be formed in an instant.” His party co-chair, Knesset member Yair Lapid, declared, too, “a unity government without Netanyahu is possible and needed. That is what Israel needs.”

Really? Is Netanyahu the only obstacle standing in the way of Blue and White’s and the Likud’s march to the altar? Let’s say that Netanyahu's rival within the Likud, Gideon Saar, manages to persuade a majority of Likud Central Committee members to depose Netanyahu. Or, let us imagine that Netanyahu decides to recuse himself and vacates his chair to an alternative leader designated by the Likud Central Committee as the party’s candidate to form the next government. But prior to establishing a “national consensus government” or a “national unity government,” as it is more often referred to, coalition partners should reach an agreement regarding several basic principles and guidelines. Take, for example, the racist 2018 Nationality Law. The Blue and White platform commits the party “to ground the value of equality in a Basic Law,” a reference to Israel’s quasi-constitutional set of laws. Will the Likud lend a hand to a law stipulating that Israel’s Arab citizens enjoy the same standing as its Jewish ones?

Even within the so-called “centrist” Blue and White Knesset faction, there is disagreement over the need to amend the law’s injustice toward the Arab minority. Knesset member Zvi Hauser, one of Blue and White’s hard-liners, was instrumental in formulating the bill at the time. Together with his fellow party member Yoaz Hendel, he refused to attend the anti-government rally on May 25 to protest the invitation extended by his party colleagues to Knesset member Ayman Odeh (head of the Arab Hadash-Ta’al list) to address the event. The Arab representative was invited at the last minute despite the objections of senior party members — chief among them former Likud Defense Minister Moshe Ya’alon. The latter claimed he knew of Likud supporters making their way to the rally who turned around and went home when they heard the Arab lawmaker would be among the speakers.

On another issue, Blue and White pledged to enshrine civil partnerships — Israel’s version of civil marriage, also between same-sex partners — into law, bypassing Israel’s legally binding religious marriages, “to enable any citizen seeking to do so to choose to anchor his partnership according to his views.” Will the Likud agree to violate its political partnership with the religious and ultra-Orthodox parties that categorically object to the civil partnership and replace the so-called “natural partners” it has in its pocket with temporary ones who could make its life miserable?

New snap elections also do not augur well for the center-left camp and for the prospects of restarting peace negotiations with the Palestinians. The monthly Peace Index survey published this week by the Israel Democracy Institute indicates that 60% of Jewish Israelis believe Israel’s international standing has improved during the Netanyahu decade. Even most of those who support centrist parties (57%) are satisfied with Israel’s relationship with important countries, chief among them the United States, India and Germany, under Likud rule. Despite the decline noted in the May Peace Index compared to the previous month’s survey, most Israelis (51%) display optimism regarding Israel’s national security. A similar rate believes Israel’s democracy is not under threat.

Netanyahu’s departure from political life is a prerequisite for the salvation of Israel’s democracy. Still, this condition is certainly insufficient to launch a recovery plan for the relationship with Israel’s Arab minority nor for the promotion of a peace arrangement with the Arabs across the fence — the Palestinians — and those in Arab states. In the next elections, with or without Netanyahu, the right could increase its power significantly. It lost some 330,000 votes (equal to 10 Knesset seats) garnered by parties that failed to pass the four Knesset seat electoral threshold (voters of the New Right, Gesher and Zehut parties). On April 9, more than 2.4 million Israelis voted for parties aligned with the political right and the ultra-Orthodox, compared with 1.66 million who voted for centrist and leftist parties — including the Arab ones. Barring a substantive shift in this balance of power, an end to Israel’s conflict with its neighbors and with democratic values will remain an illusion.