Iraq’s oil sector caught in crossfire between US, Iran

US-Iran tensions have hit Iraq's oil industry, with ExxonMobil announcing an evacuation of its staff in Iraq to Dubai. 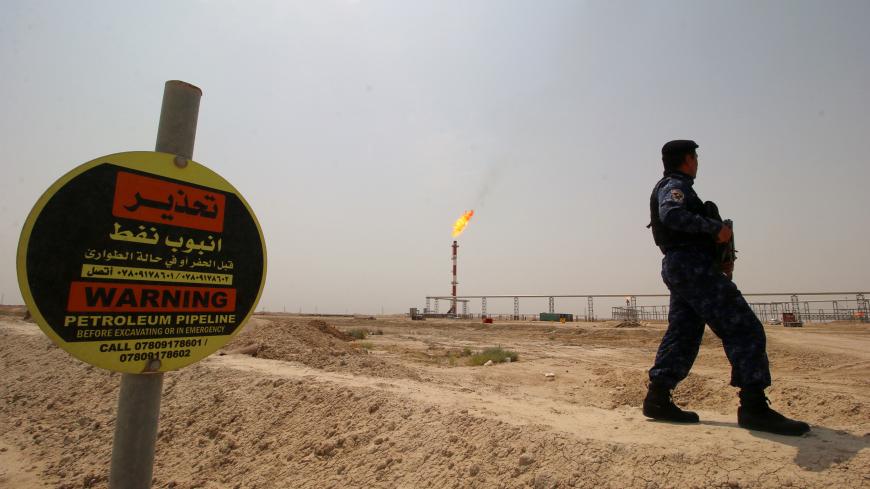 A member of the oil police force guards the entrance of the West Qurna-1 oil field, which is operated by Exxon Mobil, near Basra, Iraq, May 20, 2019. - REUTERS/Essam Al-Sudani

ExxonMobil evacuated dozens of its non-Iraqi employees from Iraq on May 18. The evacuation follows a US State Department decision to withdraw its non-essential staff from the US Embassy in Baghdad and its consulate in Erbil, the capital of Iraqi Kurdistan.

The US oil company relocated its employees to Dubai, where they will continue their work related to the West Qurna-1 oil field in Basra. The company announced May 31 that it will begin returning its employees from June 2 after the Iraqi government promised to increase the security measures in the site.

Iraq was not happy with the evacuation. Oil Minister Thamer al-Ghadhban described ExxonMobil's decision as unacceptable and unjustifiable in a May 19 press statement. He attributed the move to “political reasons,” stressing that the issue “has absolutely nothing to do with the security situation in the oil fields in southern Iraq.”

Yet Iraqi armed factions close to Iran are capable of causing instability in the oil industry whenever they please. These factions have even publicly threatened the Iraqi parliament speaker over his stance on the crisis between Iran and the United States, according to a May 25 interview with Iraqi parliamentarian Mohammad Karbouli.

Ghadhban insisted that ExxonMobil return its employees to Iraq, as they are bound by a long-term contract to develop this important oil field. However, he did not say whether the staff evacuation was a violation of Iraq's contract with ExxonMobil, or if he will take legal action against the company.

“ExxonMobil referred to Article 31 of the contract signed with the South Oil Company relating to the force majeure item to withdraw its employees from the oil field,” said Nabil Marsoumi, an oil expert and professor of economics at the University of Basra.

“If the Iraqi government does not resolve the dispute amicably, it should resort to the rules of international arbitration in the International Chamber of Commerce in Paris, as provided in Article 36 of the contract,” Marsoumi added.

But the subsequent damages stemming from ExxonMobil's decision could extend beyond the dispute with the Ministry of Oil and negatively impact the entire Iraqi oil industry.

Ghadhban said, “The withdrawal of employees could convey a false message about the situation in Iraq, which we will not accept.”

Engineer Hamza al-Jawahiri, an expert at the Iraqi Ministry of Oil, shared similar concerns. “The withdrawal sends a bad message to investors planning to invest in Iraq,” Jawahiri told Al-Monitor.

However, Jawahiri believes that ExxonMobil’s evacuation is unlikely to have serious repercussions on the Iraqi oil industry.

“Iraq no longer has any problem with the extractive industry, as a large number of old cadres and also new generations of workers have been trained, and have gained high experience in this area," he said. "Therefore, it would be possible to replace the evacuated employees with Iraqis.”

Ihsan Abdul Jabbar, director of the state-owned South Oil Company, announced on May 22 Iraq’s intention to increase the output of the West Qurna-1 oil field by 50,000 barrels per day, bringing total production to 490,000 barrels a day.

Abdul Jabbar reiterated this statement days later, but said that the total production of the field will hit 500,000 barrels per day. This is the result “of the introduction of new production units and a careful study of the requirements of replacing the evacuated employees with Iraqi ones,” he said.

Employees of foreign oil companies operating in Iraq have often worked abroad. “Until very recently, the evacuated employees used to work in the company’s offices in Dubai," Jawahiri said. "But they moved to Iraq based on the request of the ministry seeking to ease the operational financial burdens."

Omid Shokri, an energy security analyst and a visiting researcher at George Mason University, has a different view on Exxon Mobil's decision in Iraq.

“It seems that [Exxon Mobil] is trying to exploit the growing tension with Iran to place pressure on Iraq and get a bigger share of the country’s lucrative sector,” Shokri told Al-Monitor.

“The US is concerned about the increasing activities of Russian and Chinese oil companies in Iraq. This is why US Secretary of State Mike Pompeo visited Baghdad, to urge the Iraqi government to sign a major contract worth $52 billion with Exxon Mobil. There is no way Americans would abandon the very profitable oil sector in Iraq,” Shokri concluded.