The Iraqi Council of Ministers has approved a regulation requiring that 50% of foreign oil company employees working in the country be Iraqis. 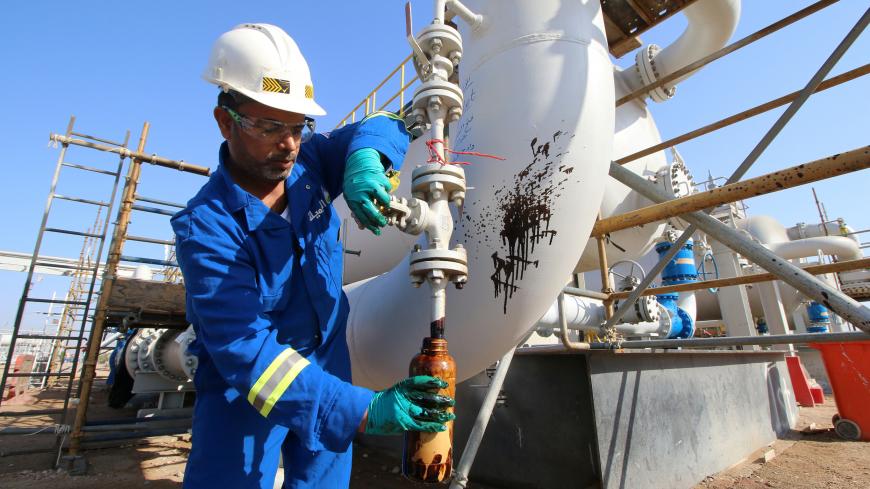 The Iraqi Cabinet announced Aug. 12 that it has approved a regulation by the Ministry of Labor requiring that 50% of foreign oil company employees working in the country be Iraqis. The move followed mass demonstrations in Basra calling for better public services, including clean water and working and reliable electricity, and job opportunities for the unemployed in the city. Iraq's largest oil reserves lie beneath Basra province.

Basra Governor Assaad al-Eidani had on July 31 announced that an agreement had been concluded with the foreign oil companies to secure job opportunities for Basra residents. Days earlier, the Associated Press reported Deputy Governor Dhirgham al-Ajwadi saying that the unemployment rate in Basra, population 4 million, had risen sharply to at least 30%.

On July 13, demonstrators had stormed the headquarters of the Russian oil company LUKOIL at Basra's West Qurna 2 field, one of the largest, leading workers to pack their belongings. A number of them were evacuated by helicopter.

According to Hamza al-Jawahiri, an oil expert at the Ministry of Oil, “[The new regulation] imposes more restrictions on oil companies, which are already voicing concerns [about workers' skills and experience] and have faced tribal threats since 2003.”

Jawahiri told Al-Monitor, “Creating jobs for tribesmen will limit their attempts to obstruct the work of the oil companies. The approach will also offer local workers necessary skills in the oil sector and develop specialized Iraqi cadres. It would be better for companies to work in this direction, even if it leads to their incurring additional costs and exerting more effort.”

Labor Ministry spokesman Ammar Menem confirmed Jawahiri's assessment to Al-Monitor, and added, “Under this provision, Iraq would abstain from disbursing the payments owed to violating companies.” He further remarked, “The Ministry of Labor's regulation will prevent foreign workers from working in Iraq except with a work permit granted by the Department of Foreigners at the ministry. A previous decision issued by the government allowed the director of the Residence Department [at the Ministry of Interior] and the head of operations [for companies] to grant entry permits without consulting the Ministry of Labor.”

The high rate of unemployment is an ongoing issue that prompted Labor Minister Mohammed Shayya al-Sudani to demand on Jan. 11, during a meeting with Zaid Elyaseri, country manager for British Petroleum (BP), that 50% of oil company workforces consist of local employees. Elyaseri confirmed his company's commitment to employ local labor.

On Aug. 7, the Ministry of Labor reported that more than 100,000 foreign workers had been granted entry permits during 2017 and 2018. Assem Jihad, spokesman for the Ministry of Oil, told Al-Monitor, “Under a contract signed May 23 with the Chinese Genghua company, Iraq binds the company to train Iraqi manpower and establish housing units for workers, in addition to service facilities, such as schools and clinics.”

Jihad also asserted, “In the second round of licensing [companies to work in Iraq], the Ministry of Oil required companies to have the local workforce account for more than 85% and sometimes 90% of their total workforce.”

There were no contracts for work in the Basra fields included in the second round of licensing, conduced in December 2009. Jihad also noted, “The contract of the Eastern Baghdad Field was not within the [second] licensing round, which is why its provisions are different from other fields. Yet still, the proportion of domestic labor has been set at 50-80%.”

As for the demonstrations, which began in early July, Oil Minister Jabbar al-Luaibi said to the Iraqi News Agency on Aug. 7, “The youths in Basra are frustrated at the lack of jobs, but the Oil Ministry alone has provided more than 139,000 jobs for the people of Basra.”

There are practical assurances that serious steps are being taken aimed at engaging Iraqis in oil work. Asaad Aboud al-Mtori, director of the Shaybah Field, which is run by the Iraq National Oil Company in southern Basra, said, “The field administration has accepted up to 10,000 job applications from people seeking to work in oil companies both temporarily and permanently.”

On Aug. 4, Khalid Hamza Abbas, assistant director of the Basra Oil Company for Administrative Affairs, said to Al Mirbad radio, “The company is preparing a list of the vacant posts that it has,” perhaps as a result of the demonstrators' efforts to pressure local governments and companies into providing more job opportunities.

Four days later, Abbas Maher, administrator of Al-Zubayr district, told Al Mirbad, “The Basra Oil Company has allocated 370 job opportunities for the people of the area, and these posts are distributed among companies working with the oil companies operating under licensing rounds, such as Shams al-Sabah Company, the Arab Industrial Company, the Taaz Company for Protection and Security and the US Halliburton Company.”

Mohammed Zaki Ibrahim, an oil expert at the Ministry of Oil, told Al-Monitor, “The oil companies operating under licensing rounds do not have large workforces in Iraq, as they only employ a few dozen foreign engineers and technicians, including a number of Iraqis. The drilling, employment, production, transfer and export operations, which require lots of labor, are run using purely Iraqi labor belonging to the state-owned oil companies.”

Despite Ibrahim's assessment, developing a workforce that is 50% Iraqi will not be an easy target to meet. It requires creating new positions, replacing some current employees and training and educating new workers.