Iranian students at Tehran University held protests after what they claim was a new clampdown on dress codes. 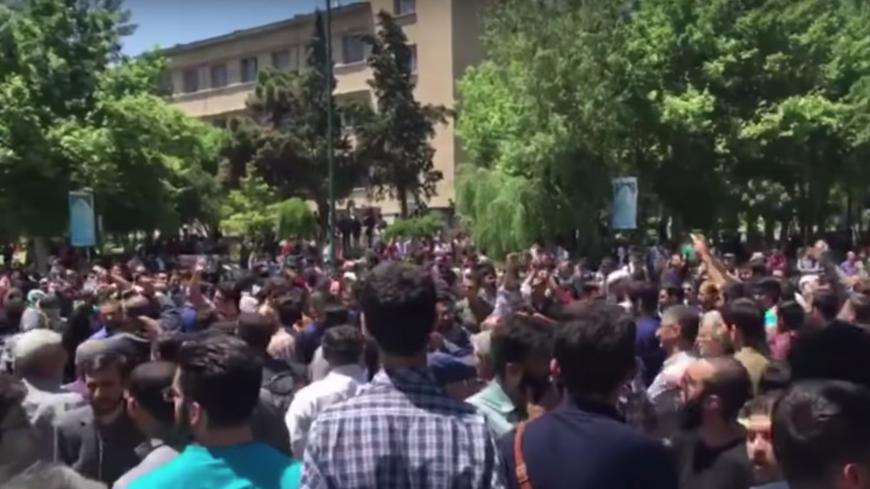 The campus of Tehran University, Iran's oldest modern educational center, had a tense day May 13 as hundreds of students held rallies against mandatory hijab regulations they said have become more restrictive than ever. The students argue that a set of new laws imposed by university officials are worsening the educational environment by pressuring female students and provoking unnecessary tension.

Some of those students claimed that as part of the new restrictions, university officials have allowed "morality police" patrols inside the campus enforce hijab regulations. Those patrols, already a highly controversial police practice, have been operating for years on the streets in the capital Tehran and other large cities, issuing warnings to women in what is deemed “lax hijab."

Tehran University's cultural affairs head, however, dismissed the idea of such patrols. Majid Sarsangi noted that the university's own security personnel have been active on campus to give "warnings" to those who "disrespect" the cultural norms, especially during the holy month of Ramadan.

But the students maintain that new regulations come as part of a recently intensified crackdown on personal freedoms including an official order from the country's Ministry of Science setting out oversight and disciplinary action for certain social media activities.

While reading out a final communique, the protesting students were purportedly attacked by a group of angry men. The protesters claimed that the attackers were non-students from outside the university and affiliated with the Basij, a conservative group with a history of violent responses to Iran's student movements. One video posted online showed such forces entering the campus as they chanted "God is Great."

But the violence did not apparently affect just the students protesting mandatory hijab. A viral picture purportedly showed a protester trying to kick a female student in full hijab and wearing a chador. Students with conservative leanings also released videos of what they said were counter-rallies they had held against the main protests, which they claimed were instigated and manipulated by "leftist" forces with an anti-Islamic agenda.

While the films and comments inundated social media, official news outlets remained largely silent on what happened on the Tehran University campus. Mardomslalari, which follows a pro-Reform editorial line, made a passing reference to the tensions, mainly focusing on the views of the university officials rather than those of the protesters.

"Bread, jobs and freedom," some of the students chanted, indicating that the demands transcended the hijab issue and encompassed economic grievances including the high unemployment facing many educated Iranians.

Tehran University has been an iconic epicenter of Iran's student movements. During the nationwide rallies that culminated in the collapse of the Shah’s rule in 1979, the university has played a leading role in raising public awareness and mobilizing anti-establishment forces. In the post-revolution era, that role has by and large maintained its vigor.

In 1999, an unspecified number of students were reportedly killed after their dormitory in central Tehran was hit in an overnight attack by angry mobs widely understood to be pro-government plainclothes forces. Several students were said to have been thrown out of windows and balconies. Similar incidents occurred in 2003 and again in 2009, when students sympathizing with the Green Movement shaped the backbone of mass protests against the country's disputed presidential election that year.

Whether the new protests at Tehran University will continue in the days to come may depend to a great extent upon the way university authorities will choose to contain the outrage. There are already calls across social media not only for students at other universities to join in solidarity, but also for people from different walks of life to hold strikes as the government is squeezed by multiple outside pressure campaigns.