Can Iran rely on Russia to dodge US pressure?

Iran is relying on Russia to minimize the impact of the US "maximum pressure" campaign, but Russia seems to have reservations while it also enjoys certain advantages if US-Iran tensions remain unresolved, albeit at a controlled level. 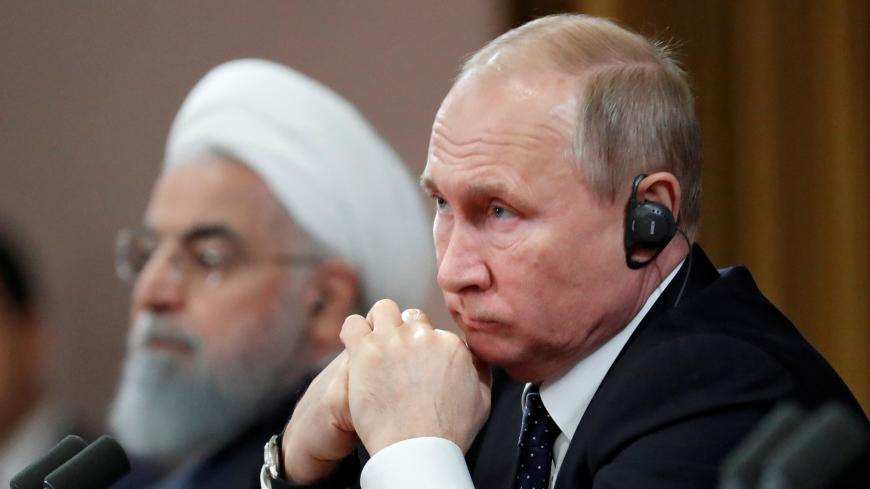 For now, dialogue with the Trump administration is not on Iran’s agenda. The Islamic Republic is instead implementing a policy of “resistance” by focusing on improving its economy and mobilizing public support. In parallel, it is engaged in active diplomacy to boost trade and circumvent US sanctions.

As part of the diplomatic frenzy, Foreign Minister Mohammad Javad Zarif recently visited Russia, Turkmenistan, Japan, India and China. The last two are leading oil costumers of Iran that have proven that they will ultimately comply with US sanctions to avert punitive measures. Even as China has demonstrated relatively steadfast opposition against US pressure, it does not yet seem to be reliable enough for Iran to fully count on.

Russia thus remains the last option for Tehran to pin its hopes on. Indeed, Moscow was the first destination in Zarif's recent diplomatic tour, which came as Iran announced that it would cease upholding some of its voluntary commitments under the Joint Comprehensive Plan of Action (JCPOA) in response to Europe’s failure to provide the promised economic dividends of the accord.

While in Moscow, Zarif said Iran and Russia have never been this close in the past few decades, and in further admiration of his hosts, said Iran differentiated between the JCPOA signatories and would never forget Russia's support.

This stance indicates a slight change of heart among Iran's Reformists toward Russia. Traditionally, the country's conservative politicians and top military brass have always championed close relations with Moscow as a strategic policy. Among the most notable among the latter are Ali Akbar Velayati, who advises the supreme leader on international affairs, Secretary of the Supreme National Security Council Ali Shamkhani and former defense minister Hossein Dehghan.

In contrast, the Reformist camp, represented by some figures within the Rouhani administration, has exhibited reluctance toward deeper ties with Russia. For instance, after Russia openly expressed a willingness to increase its crude output to make up for a slide in Iranian exports due to US sanctions, Oil Minister Bijan Zangeneh said wryly, "Iran has no permanent friend and foe."

Zarif's remarks, therefore, seem to suggest that US pressure has created more consensus across the Iranian political spectrum about outreach to Russia. But the extent to which Iran does and could rely on Russia remains subject to heated debate.

Zangeneh's argument that Russia cannot be regarded as a "permanent” friend could be backed up by recent history. When Dmitry Medvedev was president, the Russian Federation voted for multiple anti-Iran UN Security Council resolutions. It also protracted delivery of the long-awaited S-300 missile defense system and repeatedly delayed the construction of the Bushehr Nuclear Power Plant.

However, the recent political cooperation between the two countries — manifested in the Astana talks over the Syrian crisis — the expansion of bilateral trade, the delivery of the S-300 system and joint military activities in Syria as well as the completion of the Bushehr Nuclear Power Plant are indications that there is significant ground for collaboration between Tehran and Moscow.

At a time when it is being squeezed by US economic pressure, Iran indeed feels the urge to push for expanded ties with Russia and draw more Russian backing, which is probably why Zarif called for "concrete measures" from Moscow and Beijing to salvage the JCPOA.

But whether Russia harbors any will to aid Iran — and how it may do so — depends largely on a realistic review of Iran's demands as well as Russia's capacities. It also depends on the direction of Russian foreign policy. Iran's most pressing current demand pertains to bypassing US sanctions on its oil exports and having access to oil revenues. As a major oil producer, Russia will not be offering much in this regard. Clear proof of this can be seen in the failure to implement the oil-for-goods agreement between Iran and Russia.

Although Russia is offering technical support to Iran's peaceful nuclear program and related infrastructure, bilateral trade remains insignificant and is not likely to considerably expand in the short term. Bilateral trade in 2018 stood at a mere $1.7 billion, 75% of which was constituted of Russian exports to Iran. What Tehran desperately needs is a boost in exports rather than imports. Moreover, the exodus of Russian firms from Iran — including Lukoil — signifies how US pressure is impacting Russian enterprises.

On the military front, Russia is by no means willing to enter a possible conflict between Iran and the United States. While Moscow has expressed readiness to expand military ties and sell weapons to Tehran, it has simultaneously stressed compliance with UN Security Council Resolution 2231, which reviews arms-related transfers to the Islamic Republic and which will only lift the UN arms embargo on Iran in the autumn of 2020.

Nevertheless, when it comes to political support, there is much that Iran may expect from Russia. In the event of a possible US-sponsored anti-Iran resolution at the UN Security Council, Iran can hope for Russian opposition. Tehran's overall anti-US approach coupled with its shared geopolitical and security interests with Moscow could push Russia to support Iran. Additionally, Russia cannot ignore Iran's key role as a major player in the Middle East and central Eurasia. Any instability or fundamental political change in Iran in favor of the United States could harm Russian interests in both these regions. With this in mind, the Russians insist that regime change is the ultimate goal behind the US "maximum pressure" policy against Iran and thus vehemently oppose it.

However, as Zarif has asserted, supportive statements alone won’t save the JCPOA.

Indeed, Russia’s capacity to alter the course of events is likely quite limited, as seen in President Vladimir Putin’s recent remarks that Moscow has already played its constructive role on the Iranian nuclear file and cannot serve as "a firefighting team … to rescue everything." Putin’s comments also underlined Moscow's reluctance to become engulfed by the Washington-Tehran tensions. Putin's advice for Iran to stay in the nuclear deal "no matter what" did not seem to be much help to the Iranians either. Of note, Zarif has made Iran's position clear that the JCPOA is a multilateral agreement and that all signatories need to work toward protecting it.

The leadership in Tehran understands that Russia's power is limited and that Moscow is unwilling to enter a US-Iran conflict and rather seeks to reboot its strained ties with Washington. Placing all eggs in the Russian basket would therefore not appear to be the most logical choice for Iran.

The Iranians are indeed conscious that Moscow might favor a controlled level of tensions between Tehran and Washington, as it would redirect the US focus from Russia and the Commonwealth of Independent States toward Iran and the Middle East. US pressure also serves Russian interests as it pushes Iran further toward Russia, giving Moscow the status of an increasingly important partner of Tehran — and thus the position of being a power which Washington may rely on to effectively pressure Iran. Russia could further gain advantage from a hike in oil prices as a result of the US-Iran tension and Tehran's shrinking presence in the European energy market.

Mindful of these factors, Zarif's interpretation of his trip to Russia that Moscow will throw its full weight behind Tehran to protect the JCPOA and balance the "wrong policies" of the Trump administration does not appear compatible with the harsh realities on the ground.