Egypt takes further steps toward including informal businesses in its economy

A mission of the IMF is currently visiting Egypt and is reviewing reports of the country’s economic performance as part of measures to include the shadow economy into its official one. 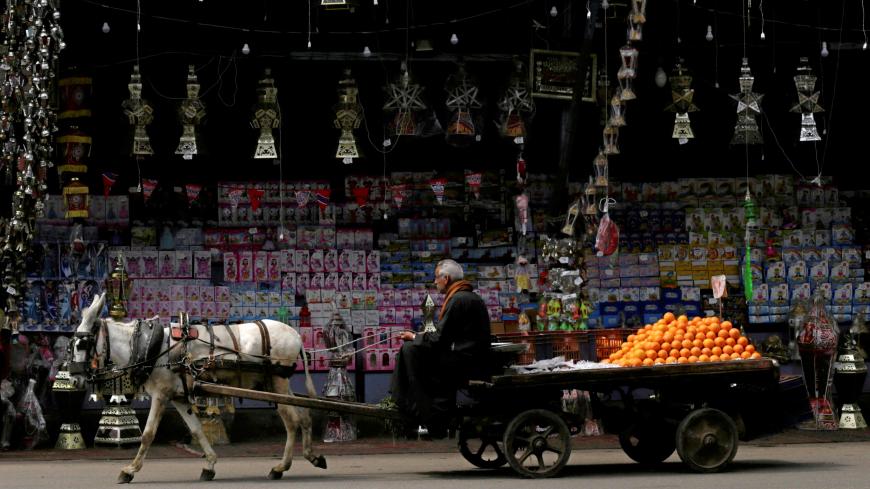 CAIRO — Serious and swift actions to integrate the shadow economy in the official one are being made in Egypt. Prominent officials at the Ministry of Finance revealed May 6 that during its May 6-20 visit to Egypt the International Monetary Fund mission revises the reports on the performance of the Egyptian economy, including the government’s plan to integrate the informal sector into the formal economy.

Minister of Finance Mohamed Maait said during a May 7 press conference at the ministry’s headquarters that the Egyptian government has finalized the drafting of a bill regulating micro, small and medium-sized enterprises to ensure the integration of the informal economy into Egypt’s official one.

A well-informed source at the Ministry of Finance, who declined to be named, told Al-Monitor that the government will submit the bill to parliament soon to allow the latter to discuss and ratify the bill, whether as is or after adding amendments. The source refrained from giving further information.

The shadow economy refers to all business activities and enterprises — mostly micro, small and medium-sized enterprises — that operate under the state’s radar, contrary to the laws in force and without declared profits calculated in the gross domestic product (GDP). Thus, they are neither subjected to quality control nor tax supervision. A shadow economy is common in developing countries such as Egypt, and mostly includes restaurants, street food carts, street vendors, vendors in informal markets and unlicenced factories.

There are different estimations as to the volume of Egypt’s shadow economy. Tarek Tawfik, chairman of the Federation of Egyptian Industries, noted April 15 that the shadow economy makes up 50% of the total Egyptian official economy. Former Prime Minister Sherif Ismail said at a press conference in November 2017 that the informal economy consists of 22% of Egypt’s official economy worth 8.2 trillion Egyptian pounds (roughly $481 billion).

The state is giving special attention to the integration of the shadow economy enterprises into the official economy system. President Abdel Fattah al-Sisi called on May 16, 2018, all parts of the informal economy to join the formal one by legalizing their statuses, offering them a five-year exemption from all taxes and tariffs in return.

Speaking to Al-Monitor, Wael Nahas, an economic expert and financial consultant for a number of large investment companies, explained the state’s attention to such integration. He said that the state seeks to include the shadow sector in the formal one in order to increase its tax revenues, and that the commodities the informal economy’s institutions sell would be subject to the value-added tax when said institutions become part of the formal economy. He added that when included in the formal sector, and once the five-year exemption period is over, these companies would be subject to a tax on profits.

A street vendor selling clothes in the Cairo district of Sayeda Zeinab told Al-Monitor on condition of anonymity, “We know that the state is trying to make our businesses part of a legal economy to obtain more tax [revenues], which we are totally against. This is because taxation will lead us to lower profits and subsequently force us to increase prices on goods we sell to our customers. This is inconvenient for the popular areas such as Sayeda Zeinab, which mostly accommodates poor and low-income residents."

He added, “The state needs to realize that street vendors and the cheap goods they sell create a balance in the face of the high prices that its annual raise on fuel prices has caused.”

Kamal Amin, a street food vendor in Cairo's al-Amiriyeh area, told Al-Monitor that he would rather become a part of the formal economy, because the state’s licenses are only granted to restaurants, not to those selling food on the street. He noted that he cannot afford buying or renting a restaurant. Commenting on the reasons behind his opinion, he explained that he was issued various fines for not having the required official work permits, and added that this is costing him money that exceeds the taxes he would have paid.

Rashad Abdo, an economic expert and the head of the Egyptian Forum for Economic and Strategic Studies in Cairo, told Al-Monitor that the integration of the informal sector into the formal economy does not only aim to increase the state's tax revenues, it also seeks subjecting the various economic activities to the relevant parties’ supervision, depending on the activity. For instance, the street food carts would be subjected to the supervision of the Ministry of Health and Population to make sure that the food they serve is fit for human consumption.

He indicated that another goal is to appraise the real GDP per capita to identify the real poverty and unemployment rates and their spatial distribution. This would help the state to identify the affected locations in order to fight the issues. He added that the state would not be able to achieve such a goal in the absence of an evaluation of the largest part of its economy and GDP that the shadow economy represents.

Commenting on the obstacles to the integration of the shadow economy in the official one, Abdo noted that such attempts were made initially under the rule of former President Hosni Mubarak, but failed for two reasons. The non-application of the law on shadow businesses has been one obstacle; some shadow businesses paid the excutive officials bribes to have them turn a blind eye to their cases. The second obstacle is the lack or abscence of incentives that would encourage these businesses to join the official economy.

Abdo concluded by stating that the state’s success in integrating the shadow economy into the official one depends on the strict enforcement of the law on the small and medium-sized enterprises that refrain from legalizing their statuses, and on encouraging them to legalize their statuses, at the same time, via tax exemptions and loan facilities, to help them develop their businesses.