The Deaf Film Lab initiative trains Egypt's deaf and hard of hearing youth on how to use the camera to communicate with others in society. 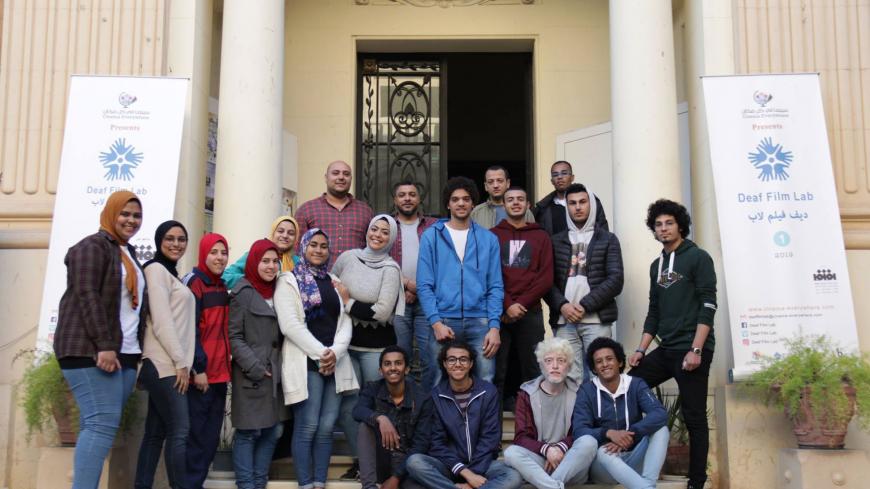 A group photo of attendees of the Deaf Film Lab's workshop and some of the tutors, uploaded April 13, 2019. - Facebook/deaffilmlab

A group of young Egyptians launched the Deaf Film Lab initiative to provide a new platform for the deaf and hard of hearing to express themselves through filmmaking.

The initiative comes after the Egyptian government’s focus on the rights of people with special needs in education and employment and their socio-political rights. The government declared 2018 the year of those challenged with a disability.

In the first phase of the Deaf Film Lab initiative, in March, 14 deaf people between ages 15-25 were trained in filmmaking in Alexandria. The participants produced three short films addressing the difficulties they face, their plight and integration efforts.

One of the films produced — “Mesh Fahem” (“I do not Understand”) — tells the story of an illiterate deaf young man who finds himself unable to order a meal at a restaurant. His communication problem is made worse by the fact that he also does not know how to read and write.

The story is based on the firsthand experience of one of the trainees. “I deal with many deaf people who cannot read and write. I believe they should learn how to read and write in order to better communicate in the community,” Muhammed Hisham, 20, told Al-Monitor. A secondary school graduate, he had previously taken part in plays for the deaf. Eager to develop his skills, he signed up for the initiative after he learned about it from his friends. He focused on scriptwriting, filming, directing and editing. Hisham wrote the script of “Mesh Fahem” and he also had a small part in the film.

“I felt very proud when we completed the film,” he said, adding that he would like to make more films.

Another film, “The Game,” focuses on a game for the deaf and those hard of hearing. “Serendipity” tells the story of a group of deaf young people, one of whom does not know sign language. His friends take it upon them to teach him to help integrate in the community.

The Deaf Film Lab was launched by the Cinema Everywhere initiative, a nonprofit group, which was founded in Alexandria in 2018. Waguih El Laqany, founder and director of both the Deaf Film Lab and Cinema Everywhere, told Al-Monitor, “The initiative enables the deaf to use film as a language to communicate with society and the world they live in. … [It is] a way to express their ideas, dreams and visions.”

“[We] seek to teach and train the deaf youth on what filmmaking entails and how they can enter the field as professionals. After the training, the participants worked in teams to produce films. We will also market and distribute their films and organize special screenings,” he said, adding that he would submit the three films to local, regional and international festivals starting in August, once he has them translated into Arabic and English. He also plans to continue with the workshops, possibly in Upper Egypt in October.

The Deaf Film Lab is not the first initiative at Cinema Everywhere to reach deaf people, Laqany said, explaining that the Independent Translation Center was established in 2017 for the translation of short Arabic and foreign films into sign language. “This is in addition to the establishment of the Deaf Laboratory for Digital and Visual Arts,” he said, explaining that this lab trains the deaf youth in photography and visual arts.

In the past two years, the Egyptian government has focused more on the rights of the disabled in different fields, particularly in health and education. The Ministry of Social Solidarity launched in August 2018 an initiative to admit the deaf and hard of hearing students at universities.

Civil society has also done its share. Privately owned DMC TV channel, for instance, is showing for the first time a series called “The Earthquake” in sign language during the month of Ramadan.

Ashraf Marih, secretary-general of the National Council on Disability Affairs (NCDA), praised these efforts. “The increase of individual and community initiatives that help integrate the deaf and those hard of hearing have many important outcomes, such as community cohesion, better education and new skills. [We also open up for them] new areas [of expression and employment] — such as the cinema industry — where they can also express the difficulties they face,” Marih told Al-Monitor.

Marih said that the deaf and the hard of hearing are among the most marginalized groups with special needs, given the communication difficulties between them and others in society. Very few people know sign language, and there aren't enough sign language interpreters, in addition to the illiteracy many face.

In order to address these problems, the NCDA has been working on providing sign language interpreters, conducting basic literacy courses and improving communication with government institutions.

The first project by the NCDA and government institutions was the translation of the Friday sermon into sign language in 2015. In addition, in collaboration with the Ministry of Communications and Information Technology, an app was developed that converts signs into written text in order to facilitate communication between the deaf and civil servants.