The Akal civil movement, which defends the rights of Amazighs in Tunisia, is entering the political arena. 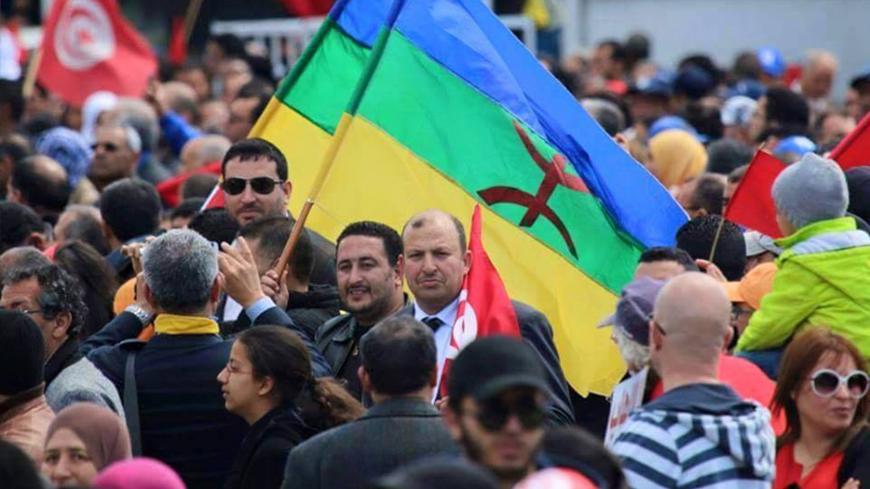 Amazigh flags are waved at a demonstration in Tunisia. Posted March 30, 2015. - Facebook/LibyanAmazigh101

TUNIS, Tunisia — The Akal movement arose during Tunisia’s 2011 revolution as a civil force to defend the rights of the country’s native Amazighs and preserve their cultural heritage. Today, the movement’s founders are turning the group into a political party that will participate in the legislative and presidential elections this year, according to Akal leader Samir al-Nefzi, who spoke with Al-Monitor.

Movement members announced at a May 6 press conference in the capital that they have applied to the government to form a party and are awaiting official permission to start their political activities. There are already 217 parties in the country, but this will be the Amazighs' first.

Tunisia's legislative elections are scheduled for Oct. 6, and the presidential election is set for Nov. 17.

The Amazighs have long suffered from a government policy of systematic marginalization that continues today, Nefzi said. In a 2016 report, the UN Committee on Economic, Social and Cultural Rights accused the Tunisian government of fighting and sidelining the Tamazight language and identity.

The word Akal means "land" in the Tamazight language. “The movement was formed as a reaction to the marginalization of the Tamazight language and identity in Tunisia, which are not provided for in the new constitution of the country. The constitution's first chapter provides for the Arabic language and the Islamic identity only,” which promotes sectarianism and disregards the country's religious and ethnic diversity, Nefzi said.

He criticizes Tunisia’s civil status law, which prohibits the use of non-Arab names for newborns. He said the new party’s vision and platform will revolve around the principles of national sovereignty, independent political thought, social democracy and equitable division of wealth.

Constitutions aren't limited to determining a country’s language or religion, he noted, but more importantly are designed to outline the political system and uphold the rights and freedoms of all people.

There are no official statistics on the number of Amazighs in Tunisia, Nefzi said, but unofficial estimates indicate they number between 500,000 and 1 million, out of the country's total population of 11.5 million. Most of them continue to live in towns close to the mountains in the south and in the northwest.

The party plans to open nine offices outside Tunisia, he said, and will have committees led by enthusiastic Amazigh young people to promote the political project in the United States, UK, Belgium and France, as well as Asia. These missions will aim to connect with Tunisians abroad and uphold the Amazigh identity.

He believes Akal's transition to a political party with a social and economic agenda is an important turning point. Akal seeks to rehabilitate marginalized Amazigh villages that lack basic social services and promote national sovereignty away from Arabization and Westernization, especially regarding France, "which is constantly accused of continuing to colonize Tunisia politically and economically," the party’s founding statement reads.

Nefzi said the party will promote Tamazight culture but will focus on secularism and civil work and will respect the country's laws, despite reservations about some of them, and will be open to all political, religious and social components in the country.

Dozens of Tamazight associations were established in Tunisia after the revolution. The Tunisian Amazigh Culture Association is among the most active and prominent organizations, seeking to promote the Amazigh folklore of the indigenous people of North Africa, but doesn't engage in political activities.

The Akal movement's transformation is not without its critics. Many people point to a law prohibiting political parties from adopting programs advocating discrimination based on religious, sectarian, sexual or regional grounds.

“The establishment of political parties is an indisputable constitutional right, but on the condition that it's not motivated by sectarian or ethnic strife or seeking to further divide the social fabric in Tunisia," Leila Chraibi, head of the Tunisian Association for Integrity and Democracy of Elections (ATIDE), told Al-Monitor.

She noted that the Akal movement can engage in political work and compete in elections scheduled for the end of 2019, if it respects the law. She noted that a committee monitors the work of parties during the election period.

Maha Jouini, a Tunisian civil activist and defender of the Tamazight identity, is based in China. She wrote on Facebook May 6 that the Akal movement's decision to enter the political sphere is totally detached from reality in Tunisia and an alien idea to the people advocating for Amazigh rights. Jouini warned that establishing such a party will deepen the division within Tunisian society and even among Amazigh associations.