The Amazigh population in the border city of Zuwar are bracing for attack by the Libyan National Army as leader Khalifa Hifter's Tripoli offensive continues. 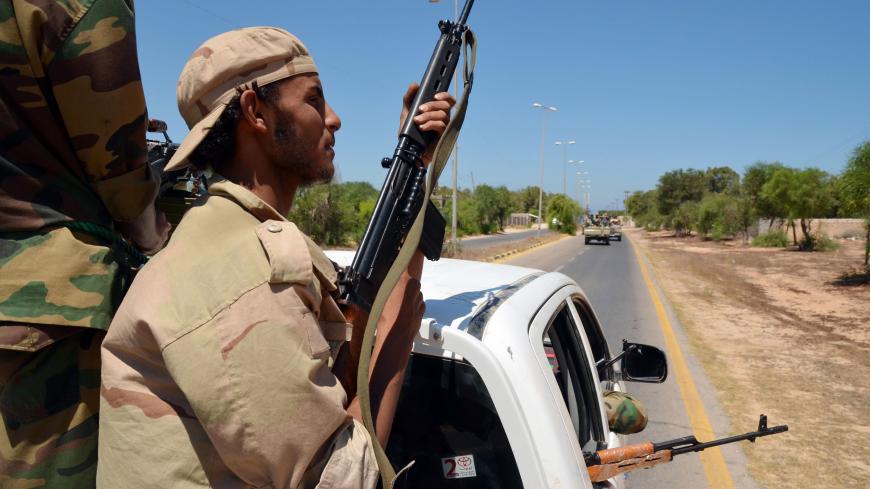 As clashes rage in southern Tripoli between eastern military commander Khalifa Hifter’s forces and the internationally recognized Government of National Accord (GNA) made up of various militias, the Amazigh in Zuwara fear their border area and city could be attacked at any moment.

“We just tried to escape. I thought it was the last day of my life,” civil society activist Fadi Dhan from Zuwara told Al-Monitor by phone, describing Hifter’s forces attacking the inactive military base of Abd Al-Samad on April 13, when eight rockets launched by a war plane at 6:45 a.m. injured two people. It was the first attack in the western border area of Zuwara since Hifter's Libyan National Army (LNA) began an offensive on the Libyan capital Tripoli on April 4, causing at least 254 deaths, over 1,228 injuries and displacing nearly 32,000 people.

Zuwara's mostly Amazigh residents feel their area could be attacked again at any moment. “Me and other five friends, all civilians, were at the military base of [Abd Al-Samad] volunteering. We usually do day and night shifts there to warn the military operations room if someone is coming to attack us,” Dhan continued. As a civil society activist, Dhan also takes pictures and videos for the Zuwara Media Center, which has been active since the 2011 revolution against deposed leader Moammar Gadhafi to independently document local events and support peace and democracy.

Zuwara is a strategic area for three reasons. It's the site of the Mellitah oil and gas plant, jointly operated by the Italian ENI and state oil firm NOC, that supplies Italy with gas through the Greenstream pipeline. It's a border area between Tunisia and Libya, important for travelers, trade and smuggling activities. Then there are the city's port and airport, which the residents fear that Hifter’s army could take even before finishing with Tripoli.

The Amazigh, which means “free people” or “free men,” are also known as Berbers. They are indigenous to North Africa and comprise 10% of the Libyan population. During Gadhafi’s rule, the Amazigh were expressly forbidden from practicing their historical customs, celebrating cultural holidays or giving their children non-Arabic names.

“I was in Tripoli when the attack started,” said Halab, who declined to share his full name. The resident of Zuwara who works and travels regularly between Tripoli, Zuwara and Tunisia told Al-Monitor, “The capital's city center was calm, but it was hard to get a taxi and people were cautious while the clashes erupted in the southern area. But when I had to travel from Tripoli to Zuwara, I was really worried. I feel that as Amazigh, I am a target.”

The coastal cities of Sabratha and Surman, between Tripoli and Zuwara, host LNA-allied militias like the al-Wadi Battalion, which is engaged in human trafficking. The Hifter-supporting Madkhalist Salafists are hostile to the Amazigh's Ibadism tradition, a branch of Islam marginalized under Gadhafi’s regime.

Back in 2017, the Amazigh Supreme Council, which fights for Amazigh rights, denounced a fatwa issued by the religious arm of the eastern government labeling Ibadi Muslims as "khawarij," or deviants, and “infidels without dignity.” The council considered the fatwa incitement to genocide of Libya's Amazigh. “Zuwara’s people are afraid of genocide if this war continues,” Halab concluded.

Founded by the Saudi preacher Rabee al-Madkhali, the Madkhalists were welcomed in the 1990s by Gadhafi for their support of authoritarian rule and in 2011 their opposition to the revolution, telling Libyan citizens to stay home. In 2012, Madkhalist militants demolished Sufi shrines in Zliten and Tripoli using bulldozers, explosives and hammers. Some Madkhalists are members of RADA, Tripoli’s special operations military police unit, and seem to be against the current offensive, though Madkhalists in Libya have generally supported Hifter.

The Tunisian government previously supported the Tobruk government, but with the GNA in Tripoli and the border controlled by Prime Minister Fayez al-Sarraj, Tunisia has taken a neutral position. To support Hifter directly or to close the border would be suicide for Libya's neighbors. Tunisia also hosts international diplomacy for the country and thus has to support a cease-fire.

Younes Nanis, an independent researcher and political analyst and a former member of the Zuwara military operations room, told Al-Monitor, “The message is clear: What in English we call the ‘Libyan National Army’ in Arabic is literally ‘Arab Libyan Armed Forces’ — and with the term Arab we, as Amazigh, are automatically excluded. We weren’t included during the preparations and back-room negotiations for political agreement before the Ghadames National Conference, a planned meeting for organizing elections, and a peace process in Libya that was scheduled to take place in Ghadames on April 14-16. But because of Hifter’s offensive, it didn’t take place.”

He went on, “With Sarraj’s GNA, Amazigh are not taken into account, but at least they are not under threat. With the LNA, which is mostly made up of pro-Gadhafi components during the 2011 war who seek revenge on western cities, and the Madkhalists, we are under direct threat.”

Residents of Zuwara and other western cities demonstrated in the streets against the war on Tripoli, calling for a united Libya. They also protested April 18 against the return of a military regime, carrying both Amazigh and Libyan flags and chanting, “We will not go back to chains.”

“We don’t like any kind of war, Arabs or Amazigh. We all want to stay alive and rebuild our country. We reject killing,” Dhan said. “When [the LNA forces] say terrorists are in Zuwara, they are lying — just an excuse to take our geographically strategic city. We want a political resolution and transition of the conflict. But if Hifter takes Tripoli, I am afraid there will not be a free Zuwara and ‘free men’ anymore.”