Will Erdogan court Kurds after his party's election loss?

The Kurds' role in Turkey's recent local elections made them both losers and winners. What will their road map be now? 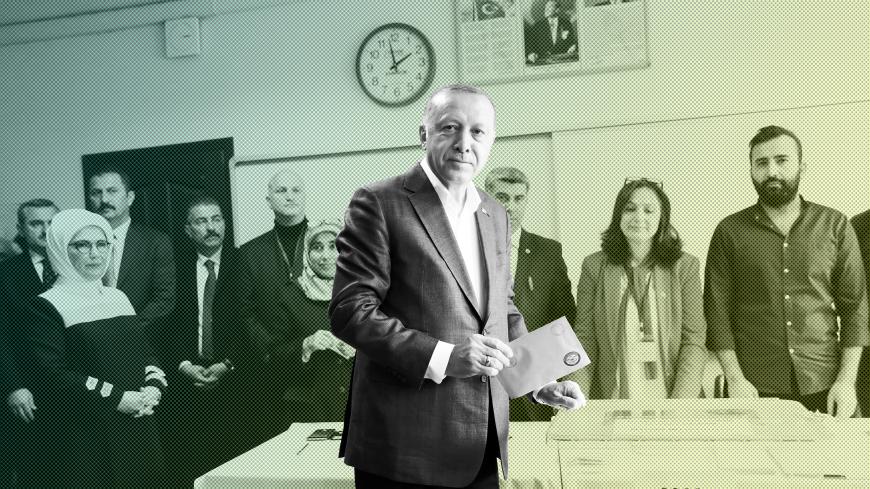 By backing the opposition, the pro-Kurdish Peoples’ Democratic Party (HDP) used a surgical strategy in Turkey's local elections March 31 to help defeat the ruling Justice and Development Party (AKP). Kurdish votes were the key to the AKP's loss in many areas, including big metropolises such as Istanbul and the capital, Ankara, and other important centers such as Antalya, Mersin and Artvin.

President Recep Tayyip Erdogan’s narrative that a win for his party would be necessary as a “matter of national survival” didn't bring the AKP the victory he sought. This narrative referred to the threat he said is posed by the Kurdish movement led by the HDP inside the country and by the Kurdish autonomous region in northern Syria on Turkey's border.

Before the elections, Erdogan’s government launched heavy security operations in mainly Kurdish cities including Cizre, Nusaybin and Sur. Erdogan portrayed these operations as part of Turkey’s war on terror against outlawed Kurdish militants. But the government’s efforts were in fact weakening democracy and damaging people’s morale in the region. For example, the government replaced the elected mayors of many cities and towns with officially appointed trustees. In addition, some 7,000 people were imprisoned, including HDP officials and activists.

Kurdish groups have been targeted by military operations, such as Turkey's move on Afrin in Syria. Erdogan also repeatedly threatened to wipe out the autonomous Kurdish structure there to appeal to and consolidate his nationalist-conservative base ahead of the elections.

At that time, the AKP’s prime goal was to prevent the HDP from again winning those municipalities that had been put under trustees. And Erdogan didn’t hesitate to say that these cities would be put back under trustee control once again should the HDP win there — if his party retained power overall.

Yet despite Erdogan's strong psychological pressure and heavy-handed practices against the Kurds, the HDP regained control of provincial capitals in Diyarbakir, Mardin, Batman, Siirt, Van and Hakkari, which had been under trustees' control. It also took Kars from the AKP’s ally, the Nationalist Movement Party (MHP).

On the other hand, the HDP lost some mainly Kurdish centers to the AKP, including Agri, Sirnak and Bitlis provinces, and Tunceli (also known as Dersim) to the Communist Party of Turkey. In 2014 local elections, the HDP had won 11 provincial capitals and 91 towns. Since then, people who had to leave their cities and towns during the armed clashes between Turkish security forces and outlawed Kurdish militants weren’t able to return to their hometowns for elections. The massive security forces placed in these cities and towns played a role in HDP losses. Moreover, experts say these clashes led to considerable anger among the Kurdish residents of these cities against the outlawed Kurdish militants, and this also played a role in the HDP losses

However, as mentioned, HDP voters were critical in the AKP’s loss of Istanbul and other major cities in the country’s western regions.

It's important to see what Erdogan will learn from this situation. Will he opt to win over the Kurds who made him lose, or will he stick to his cooperation with the nationalist circles inside the Turkish bureaucracy and pursue his vengeance? Given his pragmatism and the economic crisis the country is facing, there are those who believe that Erdogan is likely to be more conciliatory in foreign policy issues, and that he could opt to de-escalate tensions with the EU and the United States by softening his firm stand with Syria.

Yet renewed peace talks between Erdogan’s government and the Kurds are still unlikely for two reasons. First, to launch a new dialogue with the Kurds, Erdogan would have to terminate his alliance with the MHP and nationalist cliques inside Turkey. This front won’t allow him open up to Kurds. Second, Erdogan has caused so much damage to the Kurds that nobody from their camp will easily extend a hand to him.

However, the Turkish military, intelligence bureaucracy and civilian extensions of the state could once again opt for peace, instead of for hawkish policies, as it did at the end of the 1999s.

Apart from these possibilities, an election alliance led by the Republican People’s Party (CHP) also may open a new door to the Kurdish political movement in Turkey.

“An alliance of social democrats, nationalists and Kurds can be seen as a social alternative or as allowing the Kurds to open up an area to maneuver for themselves. This was Erdogan’s nightmare scenario,” Hakki Ozdal, a columnist for the independent news website Gazete Duvar, told Al-Monitor.

“Erdogan’s alternative choice for an alliance is the Kurds. He may want to revert to earlier times, but Kurds won’t do it. Erdogan didn’t even get the backing of the state to challenge the election results. Nothing to do with his 'matter of national survival' [narrative] worked. State organs saw this,” Ozdal added. “I believe a wing of the state put limits on Erdogan and saw that he couldn’t fully control the state on the night of elections. Otherwise he would have done it. That's why he will now try to improve his relations with the West and the state. While preserving the alliance with the MHP, he may well release some detainees to lower tensions.”

Ertugrul Kurkcu, an HDP lawmaker, also thinks Erdogan won’t have enough maneuvering space to allow him to terminate with his alliance with the nationalists. Kurkcu said Erdogan’s weakness in three areas will open the way for other powers. First, as a whole, the opposition’s power is growing. Second, the opposition is aware of this and is thus able to stand up against Erdogan. Erdogan became weak in his coalition with MHP and other ultranationalist groups and now can’t resist their demands. Third, AKP fault lines have become active.

“Before attempting any international action [such as improving relations with other countries], Erdogan will try to find a way to sort it out internally. External conditions have changed, A very complex equation [both] internally and externally won’t allow Erdogan to be the single decision-maker. The MHP and his local supporters won’t let him turn to Kurds again. Moreover, Erdogan suffers from a serious loss of believability,” Kurkcu told Al-Monitor.

Kurkcu said opening a new page with the Kurds would depend on the policy of the outlawed Kurdistan Workers Party (PKK), along with input by imprisoned PKK leader Abdullah Ocalan and the possible emergence of other actors besides Erdogan.

“The HDP’s determinant position in the elections was accepted by the Kurdish masses. A harmony developed with the liberal wing of the CHP. Now it's important to see how the PKK reads the situation. I don’t anticipate armed clashes, but they [would have to] be ready to negotiate,” Kurkcu added.

Can there be a new initiative from the state? Kurkcu said that while military and intelligence groups previously supported the AKP's efforts to reconcile with the Kurds, these groups "are not in power anymore" and that pathways to such reconciliation are blocked. "Ocalan's isolation shows the state doesn’t have any intention for peace. Of course, this doesn’t mean the negotiation option is totally unavailable. If new openings are to be made, these will be because of the Kurds' choices. Also, like in Rojava [a Kurdish and multicultural area of northern Syria], international pressure will have a say,” Kurkcu said.

To make the Kurds of Turkey a credible partner in domestic politics would require Ankara to give up its goal of wiping out Kurdish gains in Syria. But so far, Turkey is showing no such flexibility.