An annual State Department report says Tehran may have violated the Treaty on the Non-Proliferation of Nuclear Weapons. 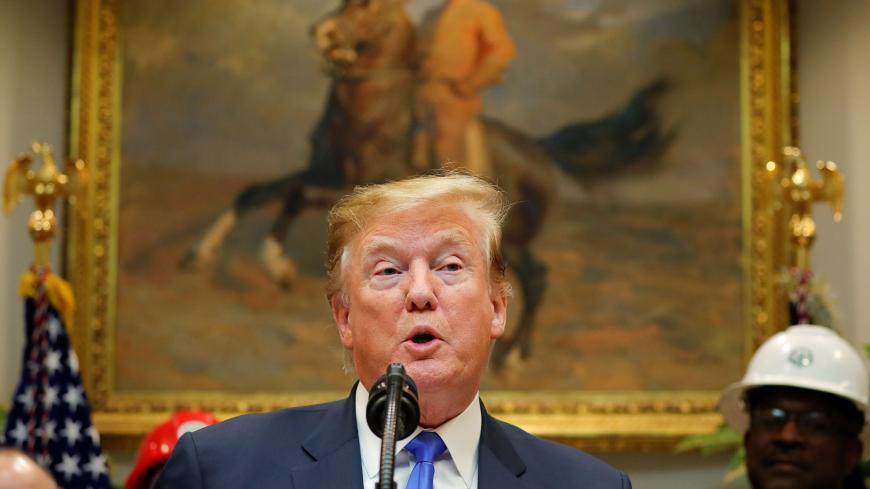 US President Donald Trump delivers remarks in the Roosevelt Room of the White House in Washington, April 12, 2019. - REUTERS/Carlos Barria

The Donald Trump administration is trotting out a new line of attack against Iran over its nuclear program as it continues to expand its so-called maximum pressure campaign.

A synopsis of a pending annual State Department report on international nuclear compliance released this week accuses Iran of potentially violating the 1970 Treaty on the Non-Proliferation of Nuclear Weapons (NPT). The allegations lay the groundwork for the administration to argue that Iran is in violation of its 2015 nuclear deal with world powers, despite the International Atomic Energy Agency’s (IAEA) assertions to the contrary.

The new allegations are based largely on documents that Israeli intelligence says it seized from an Iranian nuclear archive last year. Israeli Prime Minister Benjamin Netanyahu has seized on that evidence to allege that Iran was removing nuclear material and equipment from an undeclared site, in violation of the NPT. Scrutinizing Iran’s compliance with nonproliferation pacts beyond the confines of the nuclear deal has been a priority for both hawkish Republicans in Congress and the State Department’s new head of arms control.

The fact that Iran has retained “archives related to its past covert nuclear weapons program” while many of its scientists and technicians continue to collaborate under the leadership of the program’s former chief raises “serious questions regarding whether Iran intended to preserve the option to resume elements of a nuclear weapons program in the future,” according to the State Department report. It goes on to state that this “could potentially constitute a violation” of the NPT’s ban on nuclear weapons development as well as a violation of the treaty’s safeguard provisions overseen by the IAEA.

"The findings in the reports are informed by careful assessment of all relevant information, including information related to the existence of the archive, which raises serious questions regarding whether Iran intended to preserve the option to resume elements of a nuclear weapons program in the future, in the event a decision were made to do so," a State Department spokesperson told Al-Monitor. "

Iran’s retention of archives related to its past covert nuclear weapons program, as well as other activities noted in the report, raise serious questions regarding whether Iran intended to preserve the option to resume elements of a nuclear weapons program in the future, in the event a decision were made to do so."

The new allegations contradict the State Department’s previous nonproliferation reports, which as recently as last year found that issues on Iranian NPT violations “were resolved as of the 2015 reporting period, despite Iran’s continued refusal to acknowledge or provide certain information about the military dimensions of its past nuclear activities.” The last time a nonproliferation report asserted that Iran was not in compliance with the NPT was under the George W. Bush administration in 2005. Still, the US intelligence community assessed with high confidence in 2007 that Iran halted its nuclear weapons program in 2003.

Some Democrats on Capitol Hill are skeptical that anything has changed.

“This year’s report … raises questions about whether its findings were made independent of political interference,” said a spokesperson for Sen. Jeff Merkley, D-Ore., who sits on the Foreign Relations Committee. “The administration can’t just make up its own reality to suit its political agenda.”

Notably, six Republican hawks — including Senate Foreign Relations Committee members Ted Cruz, R-Texas, and Marco Rubio, R-Fla. — wrote a letter to President Trump last week asking him to ensure that this year’s nonproliferation report “explicitly reference the nuclear archive” — the basis for the State Department’s claims that Iran could be in violation of the NPT. “Inclusion of the archives in the report would formalize your administration’s acknowledgment of the [archive] as a nonproliferation issue that requires international resolution,” they wrote.

Yleem Poblete, who is responsible for this week’s report as assistant secretary of state for arms control, verification and compliance, has also vocally condemned what she views as Iranian noncompliance with arms control agreements. The Senate confirmed Poblete in April 2018.

During her Senate confirmation hearing last year, Poblete repeatedly accused Iran of “marginal violations” of both the NPT and the Barack Obama-era nuclear deal. She argued that before the nuclear deal, “Iran was in violation of its safeguard agreements” and its “overarching NPT obligations.” Reuters reported late Thursday that the report's unusually hawkish language on Iran created an internal rift within the State Department.

Some nuclear experts think it’s a stretch to accuse Iran of violating the NPT based on assumptions about its past program.

“If you’re going to pen that somehow some latent breakout capability would violate the NPT, then you’re opening the door to say every other country is violating [it],” said Alexandra Bell, who worked on the nonproliferation reports as a senior adviser at the State Department under the Barack Obama administration. “Our issue with Iran should be, are they complying with the [2015 nuclear deal].”

The US intelligence community has assessed that Iran is in “technical compliance” with the deal. As recently as March, the IAEA reaffirmed that Tehran continues to meet its obligations.

The new report also reverses the State Department’s previous position on the nuclear deal by highlighting its sunset provisions that will eventually allow Iran to resume certain nuclear activities. The report asserts that it would be easier for Iran to resume a nuclear weapons program “if it were permitted to take advantage of provisions in the [nuclear deal] allowing it to expand its fissile material production capability and stocks of enriched uranium once key restrictions in that deal begin to expire in 2025.”

Conversely, last year’s report downplayed the significance of the sunset provisions. “Tehran’s adherence to these commitments will hinder its ability to produce a nuclear weapon even after the time-bound provisions of the deal expire, helping to ensure that its nuclear program remains exclusively peaceful in nature,” the 2018 report concluded.

After submitting its abridged report to Congress on Monday, the State Department posted it online as a Word document, raising potential security concerns. “The posting as a doc file that can be edited and then reposted and then pushed around with potentially unauthorized changes,” said Bell.

The State Department reposted the report as a PDF file Wednesday. The full report is still undergoing a declassification review.