The Israeli prime minister and the Russian president seemed to be on the same page on Syria and committed to closer ties during talks in Moscow. 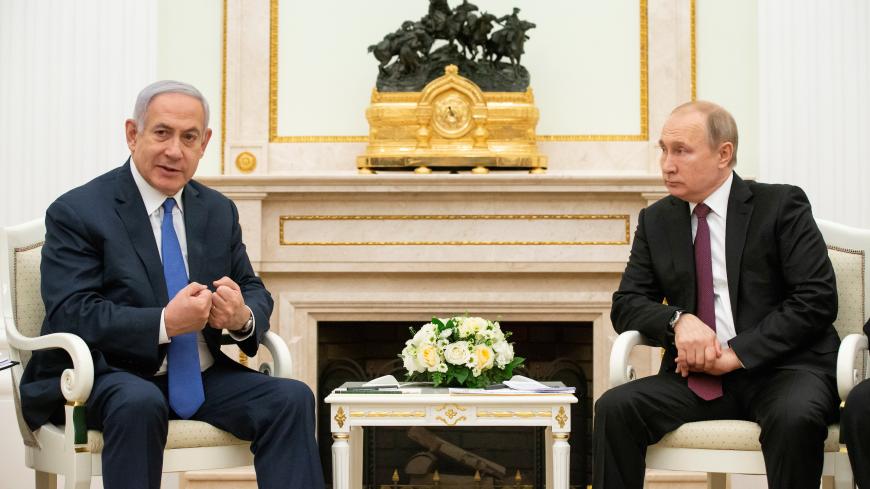 MOSCOW — Israel’s Prime Minister Benjamin Netanyahu visited Moscow today, his second trip to the Russian capital in three months. The previous visit at the end of February saw Netanyahu and President Vladimir Putin put the crisis in Russian-Israeli relations over a downed Russian plane in Syria “behind them” — the first step in getting bilateral coordination to the level desired by both leaders.

At that meeting, Netanyahu also invited Putin to Israel in May for the unveiling of a monument to the defenders of Leningrad (modern day St. Petersburg) during World War II.

This time, the conventional wisdom in Moscow had it that Netanyahu wouldn’t have traveled to Russia five days before his nation's fateful parliamentary elections had he not felt positively about the talks with Putin. With the election stakes rising and the Iranian presence in Syria apparently becoming an even bigger of a worry for Israel, Netanyahu’s three-part ploy eyed the following: to placate about a million descendants of Russian Jewish immigrants who are now voters in Israel and politically dispersed but mainly support former Defense Minister Avigdor Liberman's Yisrael Beitenu, to negotiate favorable terms for Israel’s standing in Syria, including countering pro-Iranian forces there, and to reinforce the image of one of a handful international leaders who enjoy good relations with both Trump and Putin and arguably the only one who manipulates both Russia and the United States for the benefit of his country's national security interests. The visit to Moscow may be his second biggest campaign move since his recent trip to Washington. Remarkably, Trump’s recent decision on the Golan Heights was not brought up in public deliberations of in press releases of the Putin-Netanyahu talks.

For Putin, the 13th meeting with his Israeli counterpart since December 2015 had its own significance. As Syria slowly moves into a post-war stage, he outsourced the marshy process of political settlement, return of the refugees and reconstruction to agencies within Foreign and Defense Ministries to personally focus on riskier yet more politically valuable assets: high level mediation of the Israeli-Iranian and Turkish-Syrian conundrums. President Recep Tayyip Erdogan of Turkey — yet another leader who seeks to play Russia and the United States against each other for the benefit of his country's interests — is expected in Moscow on April 8.

Putin and Netanyahu seem to be on the same page. They have developed good personal chemistry and seem to have the knack for engaging on interests without exposing their metagame. Therefore, in terms of public promotion, Putin gave Netanyahu everything he coveted — and a little more.

“We highly appreciate your policy on commemorating the Red Army soldiers who fought against Nazism and who brought liberation to many people in Europe, including the Jewish people,” Putin said in his opening remarks with Netanyahu, adding that work would begin that day searching for the remains of fallen Red Army soldiers who perished while fighting in Russia.

He went on, “I believe the same fate befell Israeli serviceman Zachary Baumel, who was killed in 1982 and was considered missing in action. As you may know, our military personnel and their Syrian partners helped find Zachary’s remains. We are glad that he will receive proper military honors in his homeland. Another purely humanitarian aspect of this case is that Zachary’s family will be able to bring flowers to his grave.”

Two years ago, Netanyahu asked Putin to help recover the body of Baumel, who went missing in Syria 37 years ago. Now that the body has been found, Putin ceremonially presented it to Netanyahu. The Russian Defense Ministry set up a special ceremony to commemorate Baumel. Putin would claim credit for keeping his word, Netanyahu for managing to develop the kind of relationship with the Russian leader for him to risk his own servicemen — and go out of his way to have the Syrians to cooperate on the task.

“Mr. President, we are wholeheartedly grateful to you for your personal friendship, for your position and for the position of Russia, which shares these values with Israel,” Netanyahu told Putin in response.

“We would like to express our gratitude to the Russian Defense Ministry and the Russian army. We will never forget their contribution, which will go down in history,” he added, making an overture to the institution that has been critical of Israel ever since the spy jet was downed in September last year in what the Defense Ministry is still convinced was an Israeli provocation.

Yet it’s the military that will have to do the daily bilateral coordination which Russia apparently seeks to take to a new level and part of Putin’s conversation with Netanyahu. Russia and Israel have recently been in talks about updating the existing de-confliction agreement on Syria that has been in place since 2015. Following the downing of the Russian aircraft, Moscow pushed for faster notifications about Israeli strikes on suspected Iranian targets in Syria. The Russians also wanted the agreements to be written and signed instead of based on mutual trust. The Israelis, in turn, are concerned about having their wings clipped. Israeli sources who spoke with Al-Monitor not for attribution argued that in principle, Israel is not against making the agreement more legally binding, but Russia’s own attitude toward Iran remains a riddle that makes it hard to negotiate concrete terms beyond the de-confliction of Russian and Israeli forces.

In February, Putin and Netanyahu agreed to create a working group on the gradual expulsion of foreign forces from Syrian territory. But each party may see the outcome somewhat differently: For Israel, just like for the United States, the primary problem in Syria is Iran, but for Russia it’s the American presence that is seen as destabilizing. That’s not to say Moscow would resist initiatives that involve cutting down on the Iranian presence in Syria, especially in the areas where it may conflict with Russia’s own interests or create a source of geopolitical strain. Yet Moscow is unlikely to yield to the Israeli demands if they mean tipping the political and security balance in favor of the United States or threaten to upset Russia’s own work on Syria.

The idea of a comprehensive working group bringing together the Russians, Israelis, Syrians and perhaps the Americans, Iranians and Turks seeks, in the words of Putin, “to settle Syria after the ultimate suppression of all terrorist hotbeds and to have all foreign contingents depart Syria to fully restore its statehood and sovereignty.” Russia certainly doesn’t see its own presence as subject to the expulsion, given the treaty Moscow and Damascus signed in January 2017 that allows Russia to use and expand the Tartus naval facility for 49 years free of charge.

Although the Astana format showed even most incogitable compositions of actors are not impossible, the modern reality suggests that all of the outside actors getting on board is unlikely and probably unproductive at this stage. Until then, Moscow is likely to eye a separate working group for Israel, Syria and Iran and will continue to forge leverage and brainstorm incentives via bilateral dealings — the process that transcends election cycles and that may take several of them before it’s completed, if ever.