Arab Israelis alienated by both top candidates as vote approaches

As the two leading candidates for the Israeli premiership reject the idea of a coalition with Arab parties, it’s no wonder that Arab citizens are not planning to vote. 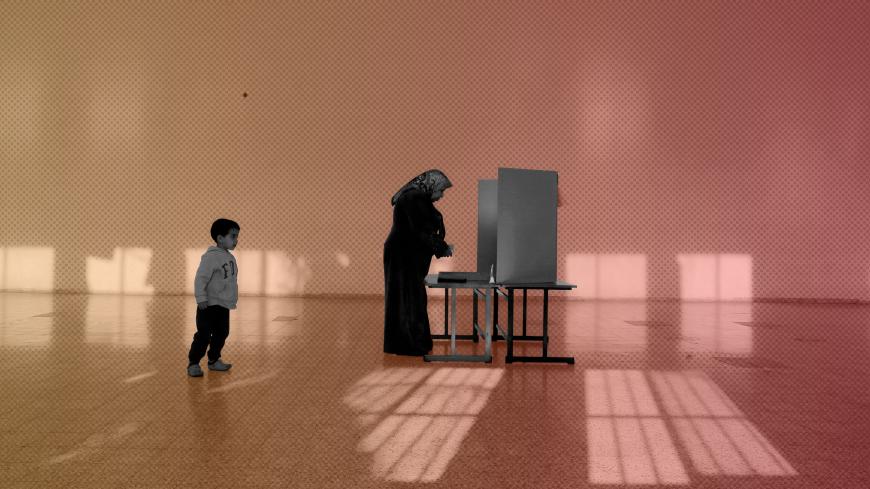 An Arab-Israeli woman stands at a voting booth at a polling station in the northern town of Umm el-Fahm, Israel, March 17, 2015. - REUTERS/Ammar Awad

Not even the most optimistic of polls give the Blue and White Party any hope of forming a relatively stable government after the April 9 elections without the support of the two Arab parties running, Ra’am-Balad and Hadash-Ta’al.

However, neither one may get sufficient votes to enable the formation of a center-left bloc large enough to unseat Prime Minister Benjamin Netanyahu. Ra’am-Balad may not attract enough votes to get into the Knesset at all. Labor and left-wing Meretz are not doing well among Arab voters, while Blue and White leader Benny Gantz has declared on more than one occasion that Arab parties would not be welcome in his government. In a Feb. 8 interview with Yedioth Ahronoth, Gantz said he will consider partnership with any Zionist, a clear reference to the Arab parties not known to share the Zionist dream. In a March 19 interview on Channel 11, Gantz explicitly ruled out any political dialogue with Arab representatives.

Little wonder, then, that many among Israel 21% non-Jewish minority are planning to spending their day off on April 9 meeting up with friends and family or going shopping rather than heading to the ballot box. The main challenge that the Arab parties now face is convincing the Arab voters that despite their frustration and disappointment, abstention would hurt their own interests. A video by popular Arab rapper Tamer Nafar confronting that question has tens of thousands of views.

A poll commissioned by the Hadash-Ta’al list forecasts a turnout of 51%, compared with 63.5% in the 2015 elections. Another poll, commissioned by the German Friedrich Ebert Foundation and the Abraham Fund, foresees a turnout of 56%, 7.5% less than last time. Such low Arab turnout was last recorded when then-opposition leader Benjamin Netanyahu challenged Prime Minister Shimon Peres in 1996, in the wake of Israel’s unintentional killing of dozens of children in the Lebanese village of Kafr Kana during a military operation codenamed Grapes of Wrath.

Two factors explain the declining Arab interest in Israel’s democratic process. One is disappointment with elected leaders whose turf and ego wars resulted in the dismantling of the alliance of four Arab parties that ran together in 2015 as the Joint List in response to the newly legislated electoral threshold of 3.25%, or four Knesset seats. However, the run seems to have been a one-off for the various individual ambitions and very different parties whose views range from Islamist fundamentalism to secular communism.

The other factor, just as important, was the passage of the nationality law last July with the support of the right-wing and ultra-Orthodox parties, anchoring Israel’s status as the nation-state of the Jewish people. The platform of the new Blue and White Party, the only viable alternative to the ruling Likud, includes a promise to amend the controversial law to include the principle of equality. However, it is hard to ignore the party leadership's public aversion to a Jewish-Arab partnership. It is no secret that one of the party’s top figures, Netanyahu's former Cabinet secretary Zvi Hauser, was instrumental in formulating the bill.

Discourse across most of the political spectrum promises equality in public services for the Arab population. Nonetheless, no additional budgetary funding can erase the shame of an Arab child living in the Galilee town of Sakhnin repeatedly humiliated along with his family by security checks at the airport. How can an Arab mother from the town of Umm al-Fahm convince her daughter that Israel is her state, too? How does one translate into Arabic Netanyahu’s declaration that Israel is the nation-state of the Jewish people and only of the Jewish people?

Recall the important but generally forgotten recommendations of the commission of inquiry established after rioting in 2000 left 12 Arab Israeli citizens and one Palestinian dead and dozens injured. “The role of the state is not limited to material matters,” wrote the panel headed by the late Supreme Court Justice Theodor Or. The commission, which included Nazareth District Court Judge Hashem Khatib and Middle East scholar Shimon Shamir, who served as Israel’s ambassador to Egypt and Jordan, recommended finding ways “to reinforce Arab citizens' sense of belonging to the state without adversely affecting their belonging to their culture and community.” The panel asked whether the time had come for “public expression of common denominators that link the entire population through the addition of official state events and symbols” with which the Arab citizens could identify.

Except for the health care system, Arabs constitute only 3% of senior government staff and 5% of mid-level public sector employees. Most government agencies do not have a single highly placed Arab. The Israel Democracy Institute determined that the way to achieve equality and civil partnership between Jews and Arabs in Israel involves not only funding allocations but also inclusion in decision-making.

The state comptroller’s 2015 report found that seven of the 10 main state-owned enterprises did not employ a single Arab official. “The data reflects a particularly grim picture that runs counter to the principle of equality,” wrote the government’s watchdog agency, urging that the problem be resolved expeditiously. But who will rectify this serious shortcoming? Who will instill the principle of equality between Arabs and Jews? Other minorities in Israel, such as the gay community and, of course, the settlers who violate the law in West Bank outposts, can choose from an array of coalition Knesset members with close ties to the government to champion their cause. The Arab Knesset members, however, perch uneasily on the opposition benches and serve as punching bags for the right.

The remedy to this dangerous sense of alienation on the part of the Arab minority was spelled out in black and white in Israel’s 1948 Declaration of Independence. Its authors pledged that the state would “ensure complete equality of social and political rights to all its inhabitants irrespective of religion, race or sex,” as well as freedom of religion, conscience, language, education and culture. Gantz’ party would do well to include these words in its agenda.

Arab Knesset members were excluded from the prestigious Knesset’s Foreign Affairs and Defense Committee for years until Meretz member Issawi Frej was accepted in 2017. In 2007, a first Arab Knesset member was invited to join the cabinet. Labor's Raleb Majadele received the science portfolio in the Ehud Olmert government. Right-wingers like Avigdor Liberman and Avi Dichter were members of that same cabinet without any problems. So why not appoint this time around Ta’al's Dr. Ahmad Tibi as minister of health? Such an appointment would help Israel's shaken democracy recover. And where is the danger in appointing Hadash’s Ayman Odeh to the Foreign Affairs and Defense Committee? He wouldn’t be suspected of promoting the sale of submarines to Arab countries.