Did female Iranian boxer fight for championship or asylum in France?

Boxer Sadaf Khadem made history as the first Iranian woman to win an international match, but her choice to compete without hijab may prevent her from going back home. 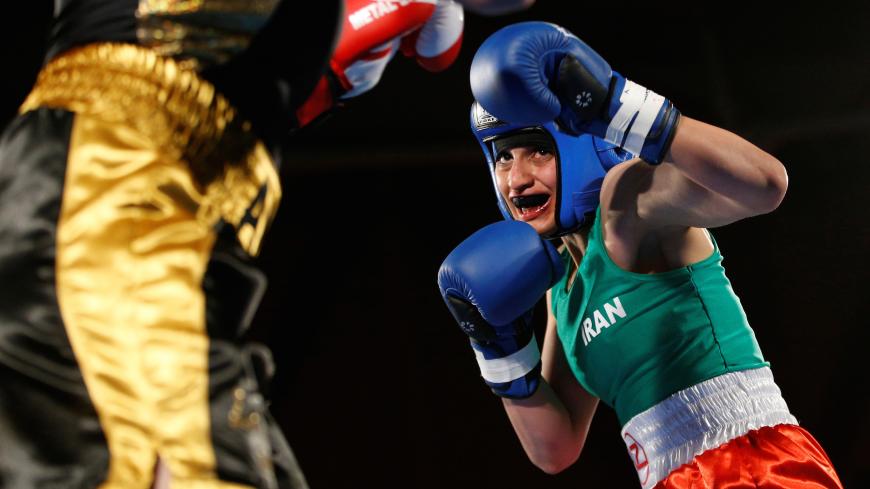 Sadaf Khadem had been interested in sports as a child in Iran in the 2000s. She began by playing basketball and then in her teenage years, added a punching bag to the makeshift gym in her family’s garage and finally convinced her parents to let her join a boxing club.

Earlier this month, the 24-year-old Khadem won the first ever victory by an Iranian female boxer at the international level. In the coastal French town of Royan April 13, she beat boxer Anne Chauvin in an amateur — but highly publicized — match.

Women boxers are rare in Iran, though the country's supreme leader has published imagery that suggests approval of women practicing other martial arts at local and international levels. Iranian female athletes compete at global tournaments in taekwondo, karate and wushu. Kimia Alizadeh, a 18-year-old taekwondo athlete, competed in an hijab and grabbed the bronze medal for the Iranian delegation in the 2016 Rio Olympics. She received the red-carpet treatment from both the state and the public upon landing back home.

Boxing, however, has remained out of reach for women. Although the Iranian Boxing Federation ultimately agreed to begin coaching and referee training courses for women in November 2018, the female enthusiasts are still grappling with numerous challenges, particularly a dress code for the sport that is normally practiced in a t-shirt and shorts. The Iranian authorities have yet to come up with apparel that complies with the Islamic clothing codes. On the international front, it was only earlier this year that the Amateur Boxing Federation allowed women wearing hijab to step onto the boxing ring in international amateur matches.

The Islamic dress issue in the ring now risks souring Khadem’s victory and even developing into an asylum question between Iran and France. During the strenuous battle in France, Khadem did not wear a hijab, opting for shorts and a t-shirt in the colors of the Iranian flag. "From Iran, not Mars, nor anywhere else," read the back of her T-shirt, announcing her pride in being Iranian.

The athlete also thanked her fans in her post-victory statements. In an interview with Khabar Varzeshi newspaper, Khadem attributed her victory to "the positive vibes from 80 million Iranians" as well as her parents' support, which she said had served as her key motivations.

"My aim is to inspire my clubmates so that they also [feel empowered] to continue on the same path and enter formal competitions,” she said.

The result was widespread jubilation among Iranian social media users and advocates of female sporting activities. Elevating Khadem as a legendary athlete in their reporting, foreign-based Persian-language TV channels dedicated special coverage to the event with a live broadcast and face-to-face interviews. It seemed to all — including Khadem and Mahyar Monshipour, her Iranian-French coach who is a former World Boxing Association champion and an adviser to the French sports minister — that the first female boxer to win an international trophy would find a hero’s welcome back at home. “She glorified Iran's name and the whole world witnessed the impacts of what she did," Monshipour told the press after Khadem's win.

An Iranian Boxing Federation statement two days after the victory indicated otherwise. The federation distanced itself from her. "Since this federation has no formal female boxing programs, it is the athletes' responsibility, and not the federation's, if they train or participate in contests somewhere."

The reaction seemed to have been a preemptive measure by the federation, which was bracing for attacks from religious hard-liners known for their intolerance of women's presence at international events.

The statement has fed concerns she could face persecution upon return for defying the country's hijab laws. On April 16, Khadem canceled her flight back home. She told French sports daily L’Equipe that she was on her way to the airport when Monshipour heard that an arrest warrant had been issued for him. A representative of Khadem told Reuters that the authorities had issued arrest warrants for both her and Monshipour. Monshipour confirmed that he had received a text message warning of arrest threats for the pair back in Iran. The claim was immediately and vehemently denied by the head of Iran's Boxing Federation.

The boxer and her coach are currently in the west-central France city of Poitier. The French press reported that Monshipour called on French President Emmanuel Macron April 18 to “find a solution that would enable Khadem to return to her country safely.”

The contradicting statements triggered speculation on social media that Khadem was already planning to ask for asylum when she left for France, that her aim was not competition but asylum in France. Several tweets claimed that was precisely why Monshipour had worked to generate such high media interest in an amateur match.

Some social media users pointed to several similar cases in the past few years of Iranian women athletes managing to obtain asylum in Canada and some European countries on political and civil rights grounds by simply removing their headscarves in public as a symbolic gesture in defiance of Iran's compulsory hijab laws.

In February 2017, female chess player Dorsa Derakhshani participated in the Gibraltar Chess Festival without a hijab while her 15-year-old brother Borna faced off against Israeli grand master Alexander Huzman in the same tournament. In doing so, both crossed red lines and paved their way to demand asylum in the United States. Their actions spurred the same debate in Iran — whether or not they had intentionally built up their international profiles to seek asylum.

Iran has in recent years witnessed an exodus of athletes in search of asylum, including those who have abandoned their teams on the spot after participating in formal international competitions aboard. Such moves have met with mixed reactions in Iran — critics call it opportunism while others argue that it is the only path open to athletes who object to their country's irrational and restrictive rules and resist stereotypes.