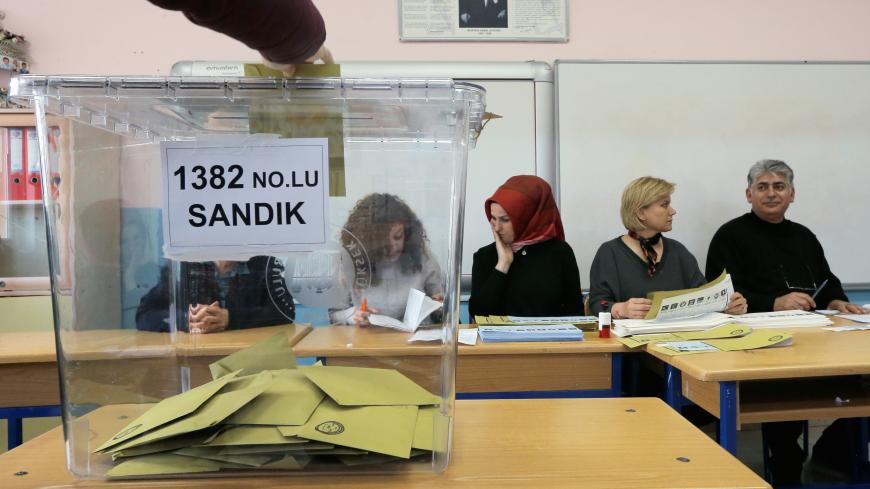 A voter casts a ballot at a polling station during the municipal elections in Istanbul, Turkey, March 31, 2019. - REUTERS/Huseyin Aldemir

Turkish President Recep Tayyip Erdogan’s ruling Justice and Development Party (AKP) formally demanded a rerun today of Istanbul’s mayoral race in what is seen as a last-ditch attempt to reverse the results that gave the opposition candidate a narrow victory. The move follows two weeks of appeals and recounts in the country’s financial capital amid claims of fraud by the AKP.

Why it matters: The decision for a rerun was clearly made by Erdogan, who seems determined to cling to power in Istanbul. Controlling the city’s mayor office helps finance a multi-billion-dollar patronage network that has allowed the AKP to govern alone since 2002. And it was likely made from the get-go. During the past two weeks of opposition candidate Ekrem Imamoglu tirelessly campaigning to get his victory recognized, Erdogan’s propaganda machine has run full time to discredit the result and repeat the claims he made throughout the campaign: that the opposition were traitors and terrorists in the service of foreign powers bent on wrecking the country.

Nicholas Danforth, a senior non-resident fellow at the German Marshall Fund of the United States, noted, “When accusing your opponents of treason isn’t enough to win an election, it can still lay the groundwork for trying reverse the results.” The trouble, though, he told Al-Monitor, is that “while not all of the AKP’s supporters appear comfortable with the course the party is taking, they’re no longer able to effectively object.”

What will the markets say? The Turkish lira is in the throes of an economic crisis, with spiraling inflation and unemployment eroding support for the AKP. The party lost nearly all of the country’s major cities, including the capital Ankara, though it won the overall vote in alliance with Erdogan’s nationalist partners. A rerun would likely be held on June 2, if the application is accepted, creating time for investor confidence and the wobbly Turkish lira to sink even further. Timothy Ash, a London-based economist who closely monitors Turkey, echoed concern in a series of tweets. “Turkish markets certainly don’t want another election campaign. Policy makers just need to get theır heads down and rectify the glaring problems in the economy," he wrote, and "Remember we were told that there would be 4 years without elections.”

What’s next: The ball is now in the YKS’s court. And on its decision hinges not only the future of Istanbul, but many would argue the fate of whatever shreds are left of Turkey’s democracy.

A rerun would signal to millions who cast their votes for the opposition that with the system already solidly stacked in Erdogan’s favor, change can no longer come through the ballot. It will also reinforce the sentiment that the AKP will cheat its way to victory. It is then up to the opposition to weigh the benefits of legitimizing the rerun by participating against boycotting the polls. Kurdish support, which helped tip Istanbul in the opposition bloc’s favor, will prove key. Whatever the YSK and the opposition decides, a prolonged bout of instability and hardship likely lies ahead.

Know more: Read about the YSK’s move to disqualify elected pro-Kurdish mayors and check out the economic balance sheet of the local elections.