More and more women are starting high-tech businesses in Israel, site of the second-largest technology hub in the world. 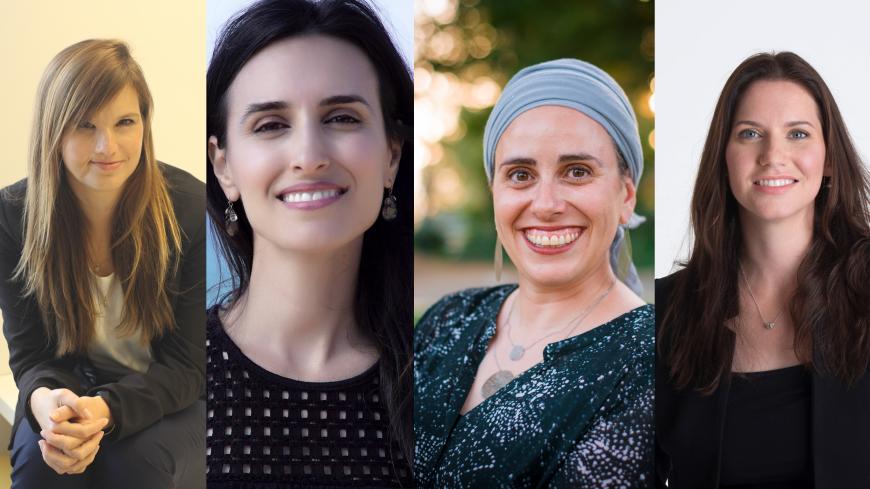 (L-R) Sivan Raucher, Liat Mordechay Hertanu, Miriam Schwab and Yonit Golub Serkin have all started tech businesses, a sector they say can be a challenge but also rewarding. -

The State of Israel is young, celebrating its 71st year in May, so it should come as little surprise that its technology sector, the second-largest tech hub in the world, is young as well. Israel's tech sector, like many others, has thus far been dominated by men, but as it continues to grow, so does the number of female entrepreneurs entering it with promising start-ups.

Given the youthful energy and innovation of Israel’s thriving start-up scene, Forbes selected Tel Aviv and Jerusalem as the dual headquarters for its first Under 30 Summit Global, held May 6-9. The event brought together entrepreneurs and so-called game-changers from Africa, Asia, Europe and across the Middle East for a jam-packed schedule of networking, pitching and incubator events tapping into Israel’s $22 billion tech ecosystem.

This year, Forbes is blazing another trail with its first Under 30 Summit for Women, to be held March 31-April 4 in Tel Aviv and Jerusalem. The event couldn’t come soon enough for female entrepreneurs in Israel, a county that more than 40 years ago had a female prime minister but today tussles with a patriarchal, machismo-infused society deeply influenced by the religious right.

“There still aren't enough women in prime investment roles, in Israel and in other parts of the world,” said Yonit Golub Serkin, managing director of MassChallenge Israel, the Jerusalem-based arm of the global tech accelerator MassChallenge. “Until there are more women able to open up a checkbook and invest, female-led companies will continue to be under-funded and undervalued.”

Serkin told Al-Monitor that MassChallenge — headquartered in the United States with offices in Massachusetts, Rhode Island and Texas as well as Israel, Mexico and Switzerland — does not have quotas for supporting female-run start-ups, but she nevertheless works tirelessly to make sure innovative new companies founded by women are identified and nurtured. Why? Simple economics.

Serkin explained, “Recent reports are that women raise about 2% of venture capital in Israel, however, women led companies at MassChallenge in the country have raised nearly $50 million. While this is slightly less than their relative representation at the accelerator, it vastly outpaces the stats for non-MassChallenge companies.”

In short, when women have the support and infrastructure of an incubator like MassChallenge, they earn a lot of money, and their businesses flourish.

One start-up supported by MassChallenge is Strattic, which offers simple, fuss-free security options for WordPress users by converting their sites into a static version with a single click of a button. Strattic’s CEO and founder is Toronto-born, Jerusalem-based Miriam Schwab, a religious Jewish mother of seven. She decided to create her company after spending 12 years running a web development agency supporting WordPress and constantly finding herself frustrated by the vulnerabilities that a such a flexible open-source CMS, content management system, brings.

Working as a female start-up entrepreneur in Israel isn’t easy, Schwab admits, but she is quick to add that when compared to the reception that women in technology face in other countries, she considers herself immensely lucky.

“I think we don’t always appreciate it, because we’re so used to it, but my co-founder and I have amazing access to investors. And there’s a lot of investors in Israel simply due to the start-up culture here,” Schwab told Al-Monitor. “It’s definitely a ‘the tide raises all ships’ sort of scenario, where everyone benefits [from the saturation of start-ups], including women. But it’s no doubt more challenging as a woman, or any minority here, and you have to be better, fight harder and be more persistent.”

For Liat Mordechay Hertanu, who in 2013 began working on 24me, a next-generation personal assistant app awarded Apple’s “App Store Best of 2014,” the creativity that infuses daily life in Israel is inspiring.

“Israelis are super creative, and they come up with ideas,” she told Al-Monitor. “They never settle.”

That sort of attitude is what pushed Hertanu to create 24me with her partner, Gilad. The two of them, busy working parents to three children, were exhausted trying to juggle their professional and personal lives, keeping track of appointments as varied as board meetings and soccer practice. They couldn’t find a good scheduling app to manage their crowded calendars and keep them on track without confusion, so they decided to create one themselves.

“Everybody in Israel is trying to create their own start-up, and it’s amazing to see that sort of innovation,” Hertanu remarked. “I think it’s something unique.”

Another unique aspect of Israel is its strength in the security sector, which has created an entire generation of former soldiers ready to apply their battle-honed knowledge to the field of business. Among them is Sivan Raucher, who threw herself into consulting after serving seven years in the Israeli army in a special cyber security unit.

Within a few years, Raucher had dreamed up the SAM Seamless Network, a cybersecurity technology platform that squelches threats at the source by securing network gateways. According to her, success as a woman in technology and business is simply a matter of keeping your head straight.

“Founding a company is no easy decision or career path for anyone,” Raucher told Al-Monitor. “I never allowed the fact that I was a woman to prevent me from achieving my goals.”

Raucher noted that the number of female CEOs is low around the globe, especially in the cyber industry, and that while Israel certainly has room to grow in that regard, the country is doing well in making strides toward gender equality.

“Every day I meet successful women in high tech,” said Raucher. “Gender has nothing to do with success.”