What’s in store for Turkish economy after local polls?

Once Turkey’s March 31 local elections are over, Ankara is expected to focus on restoring the confidence of foreign investors — an uphill task that will require bitter pills to redress economic balances. 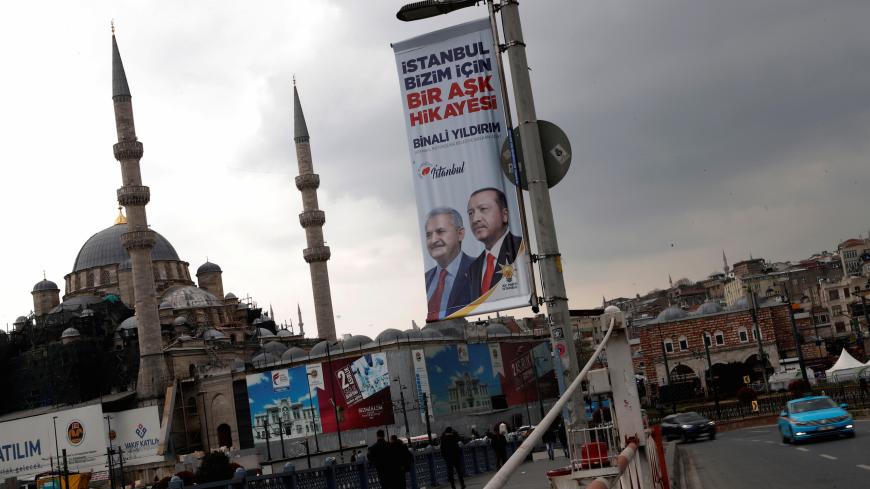 An election banner with the pictures of Turkish President Recep Tayyip Erdogan and AKP mayoral candidate Binali Yildirim is seen over the Galata bridge in Istanbul, Turkey, March 27, 2019. The slogan on the banner reads: "Istanbul is a love story for us.” - REUTERS/Murad Sezer

In Turkey’s municipal polls on Sunday, voters will not only decide who runs town halls, they will also show how willing they are to punish the ruling party for a bruising economic crisis that is fueling price rises and unemployment. The economic turbulence began shortly after the presidential and parliamentary elections in June 2018, keeping President Recep Tayyip Erdogan’s government busy in the second half of the year and causing it to stagger in the run-up to the local polls.

Sunday’s vote will remove the electoral pressure on Ankara, easing its hand in drawing a road map to tackle the crisis. The economic scenarios for April have thus become a top subject of discussion.

In fact, a road map is already in place. In September, the government released its medium-term economic program, officially called the New Economic Program, setting an array of recovery targets. Yet, under the pressure of looming elections, the program was effectively shelved, giving way to populist measures designed to minimize the impact of the crisis on the electorate, soothe popular anger and put a temporary dressing on economic scars. As a result, April — or the elections aftermath — has become synonymous with a new beginning for economic policy.

Treasury and Finance Minister Berat Albayrak — made the top man of the economy by Erdogan, his father-in-law — has also said that April will be a period of fine-tuning economic policies, with “all steps” taken in coordination with the president.

How the elections reshape Turkey’s political landscape will be the most crucial factor down the road. Observers who have followed the Justice and Development Party (AKP) since its ascent to power in November 2002 would know that the goal of building a regime based on political Islam is above everything for the party and that its economic policies are designed to get popular support to advance this agenda. Hence, regardless of the means at its disposal, the AKP has always prioritized popular contentment and therefore economic growth.

The insistence on heedless growth has continued, despite the obvious fact that such growth will be followed by crises. In 2017, economic growth was stimulated to reach as high as 7.4%, which was necessary to secure the critical constitutional referendum that year and the early presidential and parliamentary polls in 2018. And even though a big crisis was clearly on the horizon, Erdogan refused to give up on growth policies aimed at currying favor with the electorate. Eventually, he failed to fend off the turmoil and had to go to elections in a crisis environment.

Therefore, the AKP’s anxiety to preserve its political hegemony will be a major factor shaping the post-election scenarios. This, however, is no longer an easy task. Since 2015, the AKP has managed to preserve its hegemony only with the support of the Nationalist Movement Party. A potential electoral hemorrhage on March 31 could deal blows to that alliance as well.

The AKP government might have mobilized all its means to minimize the impact of the crisis on voters, but the foreign lenders of the Turkish economy are well aware that its fragility has reached dangerous levels, as evidenced by the fresh turbulence that hit only a week before the elections.

It all started with a report by JPMorgan, a globally influential investment bank, which drew attention to a fast decline in the Turkish central bank’s reserves, a resurging current account deficit and an accelerating dollarization. The report also noted that interest rates on loans had been lowered by public banks and that the country faced a tough timetable in its foreign debt repayment. Based on those observations, the bank advised its clients to invest in hard currency rather than the Turkish lira. After the report went public March 21, the price of the dollar shot up 6%, hitting 5.77 liras in the evening. In response, Turkey’s Banking Regulation and Supervision Agency and the Capital Markets Board launched probes into JPMorgan on grounds it was “misleading” its clients. The central bank, meanwhile, sought to stop the slump of the lira through costly borrowing means and measures tightening the lira liquidity.

The central bank’s reserves have indeed notably decreased, which will be one of the most decisive factors in the April scenarios. An economy with scant reserves can hardly enjoy the confidence of investors, especially foreign ones. Hence, once it gets rid of the election pressure in April, Ankara is expected to prioritize the restoration of foreign confidence. This, in turn, will require bitter pills to redress economic balances. The immediate steps are expected to aim at monetary tightening and fiscal discipline to reduce public gaps.

Obviously, such steps will have costly ramifications, such as a deepening economic contraction, more unemployment and poverty. At an election rally March 16, Erdogan appealed to the crowd for support, pledging that the government would be able to take “faster and more decisive steps” after the local polls, with the next elections four and a half years away. Yet the AKP has an electorate accustomed to the boons of growth, and whether they will sustain their support despite bitter pills is highly questionable.

The external climate is another major factor that will affect the April scenarios. Some observers believe the government’s spats with Washington over Middle Eastern issues and arms procurement are intended mostly as domestic grandstanding and election investment, suggesting that Ankara will move to reduce tensions after the polls. Ankara’s economic woes, namely the need for external funds and a possible dialogue with the International Monetary Fund (IMF), also dictate moderation with Washington. Experience shows that tensions with the United States push up Turkey’s risk premium, which has decoupled 100% even from the risk premium of Brazil, the country closest to Turkey in this rubric. In sum, Turkey cannot afford accumulating further risks. Hence, seeking rapport with Washington is a likelier prospect.

When it comes to how Ankara will secure the much-needed external funds, knocking on the IMF’s door is unlikely, at least in the first half of the year. Instead, the government is expected to adopt “an IMF program without the IMF,” as prominent Turkish economist Korkut Boratav calls it, which is basically belt-tightening measures. Ankara would hope that by doing its “homework,” it would win the IMF’s appreciation, including its public pronouncement to the international audience.

But how will Ankara get the urgent funds needed to do “the homework”? If things do not go as planned, Turkey might knock sooner on the IMF’s door and — possibly with US President Donald Trump’s support — try to obtain a relatively cheap IMF loan to float its ship in return for austerity measures. The government relies on the relatively long mandate it has until the next elections to make up for the popular indignation that the austerity measures would cause.

One factor that seems to make things harder after the elections is the state of the global economy, which is increasingly sounding signals of turbulence. With signs of recession even in Germany, a top trade partner of Turkey, the fertile rains expected from April might turn into ravaging hailstorms.