Can joint Turkey-Iran action against PKK be real?

Turkey’s wish for a joint operation with Iran against the outlawed Kurdish militants along the Turkish-Iranian border is back on the agenda once again, but how realistic is it? Experts believe it is not. 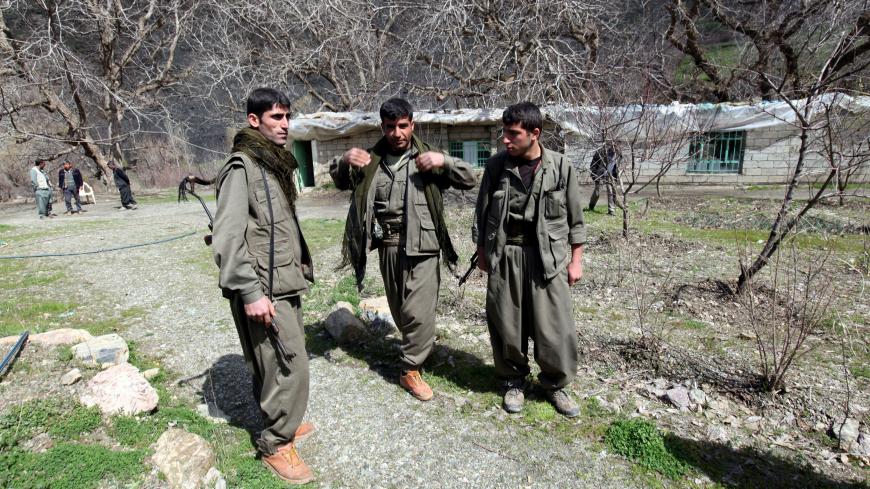 DIYARBAKIR, Turkey — In the run-up to elections, Turkish government officials tend to claim that Turkey and Iran will conduct a joint operation against outlawed Kurdish militants along the border.

When Turkey was preparing for the general elections in June 24, 2018, Turkey’s Interior Minister Suleyman Soylu had announced that Turkey and Iran were planning to launch joint operations on the Qandil Mountains, where the headquarters of the outlawed Kurdistan Workers Party (PKK) is located. But these plans have not been realized. Turkey along with most Western powers consider the PKK a terrorist organization.

Turkey is preparing to hold local elections on March 31, and Soylu voiced similar plans. “God willing, we will conduct an anti-PKK operation with Iran. A joint operation had long been a wish of the Turkish state,” Soylu told Turkey’s state-owned news agency Anadolu on March 6.

Iran, on the other hand, has always been very cautious in its comments about these plans, which are frequently dismissed by the Iranian Foreign Ministry.

Last year, during a Turkish operation on the Qandil Mountains, Turkish media claimed Iran was about to join the operation, but this did not materialize.

Toward the end of last year, in the Iran-Turkey joint working group meeting held in Tehran, an agreement covering security issues was signed. Turkey said the agreement covers also joint operations against the PKK.

“Operations will be conducted when necessary and will cover everyone implicated in terror actions and breaches of security,” the Iranian side announced without directly referring to the PKK.

Turkey is again heading to new elections. Although it will be a local election, the fight against terror has been a major campaign issue for the ruling Justice and Development Party (AKP) and its nationalist allies. The joint operation with Iran is back on the agenda once again.

Without dismissing the possibility that this could be an election gimmick, one should be cautious when dismissing how realistic it could be.

According to Vedat Kocal, a political scientist at Dicle University in Diyarbakir, such an operation is not likely. Kocal told Al-Monitor that Turkey’s economic policy will not permit such an operation. “You have to assess such an operation as moving closer to China, Iran and Russia, which will have costs. If it is an election ploy it will not be a problem for Europe but it will be just showing off. If there will really be a comprehensive military operation that has to take place in Iraqi Kurdistan. But that will mean physical occupation of Kurdistan territory by Turkey and Iran. Kurdistan’s ties with the West — especially with Europe — is constantly developing. You have to keep that in mind."

He added, "It would be total severing of ties with already weakened relations with the liberal Western world and becoming a kind of a despotic military regime. This appears to be the trend now. But looking at it from Turkey’s view on economic relations, it is not realistic. Turkey doesn’t have intensive economic ties with the Eastern Hemisphere. While Turkey’s economy is 90% dependent on Europe and the United States, how can it risk to cut off economic ties with them? Does the AKP have enough power for such a structural transformation? It has to be a very powerful ruling party; it has to have a capacity to be able to feed the people. I don’t see this in AKP’s economic policy.”

Kocal said that the joint operation remarks are very likely election-oriented, noting, "Iran with the lapse in nuclear agreement is blowing the bridges with the West. Recently the United States threatened Turkey over S-400 Russian missiles. That was an ultimatum. Can the Turkish economy cope with that? We have a dollar-based economy. Such an operation will mean a rise in the dollar parity. I don’t think this is likely.”

Kamal Chomani, a Middle East policy expert at the Tahrir Institute for Middle East Policy think tank, also thinks such an operation is far-fetched. He believes both the domestic and international issues of Iran will not allow it.

“Iran has many domestic problems. Protests are shaking its politics. Iran maintains its presence in countries such as Yemen, Iraq, Syria and Lebanon but keeps the clashes away from Iran. If Iran enters into a joint operation against the PKK it would be instigating violence on its borders and in its cities. Iran is spending millions of dollars to confine strife to other countries,” he told Al-Monitor. “Since 2011, there has been an unofficial cease-fire between Iran and the PJAK [Party for a Free Life in Kurdistan, the Iranian extension of the PKK]. At Qandil you don't only have the PKK but also the PJAK. If there is an operation against Qandil then Iran will be attacking the PJAK, which will in turn provoke PJAK action against Iran. It will escalate its actions in the cities. Why should Iran provoke clashes on its border and in its cities?”

Chomani said the idea of the operation is not realistic because of Turkey’s position in Syria. “Some may say that Iran could press on the PKK because it is supporting the Kurdish groups in Syria. This could sound logical but why should Iran take such a risk for the sake of Turkey? The interests of Iran and Turkey contradict each other in Syria. Turkey has occupied some towns in Syria. Iran opposes that. Iran is an ally of the Bashar al-Assad regime. Turkey is supporting Sunni Islamist groups that fight Assad’s regime. That's why such an operation is not realistic,” Chomani added.

Chomani said that talk of such an operation is election ploy, and he believes Iran will not take such a risk. “It could be a small operation; Iran may join that one. Turkey and [President Recep Tayyip] Erdogan may hope to demonstrate how strong they are with such an operation. Until today Turkey has not been able to ally with any regional country in an operation against the PKK. Anyhow that would not change anything. They can’t finish off the PKK with such an operation,” he noted.

That such a project of joint operation was disclosed by a Turkish interior minister known for his inflexible, tough statements instead of other top level officials suggest that it is an election ploy.