Iraqi officials and their Arab counterparts at the 2019 Sulaimaniyah Forum called for turning toward other Arab states while balancing relations with Tehran. 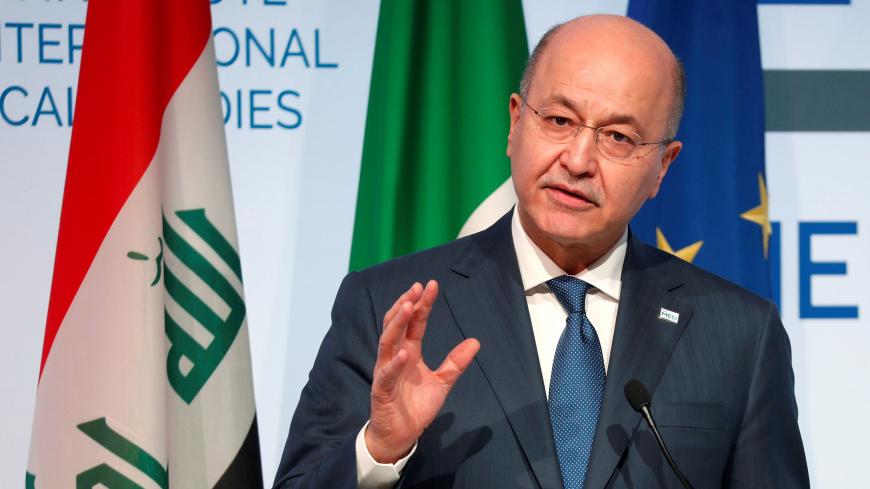 The Iraqi city of Sulaimaniyah hosted the sixth-annual Sulaimaniyah Forum on March 6-7, where discussions focused on Iraq’s strategic significance in the region. During the forum, Iraqi officials and their Arab counterparts called for Iraq to re-embrace strong ties with its Arab neighbors and strike a balance in its ties with Iran.

This year's forum was held under the motto “Iraq and Its Neighbors: Toward a New Regional Order.”

Iraqi President Barham Salih said on the first day of the forum that Iraq is striving to bring together different viewpoints in the region based on its depth of ties with Arabic and Gulf states, assuring that this will bring major economic developments to the country and help solve the security crisis. Iraq is capable of being an "arena for consensus and reconciliation among the countries of the region," he noted.

Salih highlighted the economic role of Iraq in bringing peace to the region, saying that Iraq is moving toward being a “bridge between the region’s economies by linking infrastructures between the Gulf, Turkey and Iran on one side, and between the Arab region and the Mediterranean region on the other."

Salih referred to his recent campaign to visit different regional countries — including Jordan, Kuwait and Saudi Arabia — and preparations for signing major economic agreements between Iraq and these countries in order establish a regional economic system that brings all the countries closer and enables Iraq to play a balancing role in the region.

In the same context, former Iraqi Prime Minister Haidar al-Abadi highlighted the importance of building a national view, distancing the country from the regional and international conflicts — including the Iran-US conflict — and striking a balance between all active powers in Iraq to serve national interests.

President Salih also announced that Iraq is looking to build a network of “interrelated interests” such as regional railways, pipelines and free trade zones across Iraq’s borders with all of its neighbors.

For his part, former Iraqi Vice President Ayad Allawi emphasized the importance of Iraq’s role in the region, saying that it should be a “calming factor” in the midst of ongoing conflicts.

Member of parliament Faiq Ali al-Sheikh stressed the necessity of a two-way rapprochement between Iran and Arab countries. “Iraq must adopt serious policies to return [to having strong ties] with [other Arab states], and the latter must look to strengthen ties with Iraq as well,” he said, adding that “Arabs cannot disregard Iraq as a regional power with a rich history and great possibilities.”

These calls for more openness toward Arab states weren't limited to the Kurdish and Arab Sunni figures alone, but even Iraqi Shiite figures who are known as close allies of Iran demanded rapprochement with Arabs and called for Baghdad to play an intermediary role between Iraq’s neighboring countries.

The young Shiite cleric Ammar Hakim, head of the Hikma Movement, said that Iraq must adopt an independent position in order to play a central role in opening dialogue between Iran, Arabs, Kurds and Turks. “Iraq must be the peace gate of the region,” he added.

Arab figures meanwhile welcomed Iraq's rapprochement toward other Arab states, calling for a stronger and deeper involvement by Iraq in Arab issues.

“We have never doubted that Iraq is a great force in the Arab world, but Iraq cannot reach its peak without Arab support,” said Amr Moussa, former secretary-general of the Arab League.

Moussa said Iraq cannot play this role without getting out of the sectarian conflicts and adopting a broader national position.

Arab figures seemed to be very realistic in addressing the regional conflict between Iran and Arab countries. They all called for reaching out to Iran via Iraq instead of escalating the confrontation.

Moussa said the regional disputes cannot be dealt with through force or intervention but rather through communication and understanding, which are key to dialogue.

Salih further stressed that Baghdad seeks to stay out of the US-Iran conflict. In response to a question about President Donald Trump's claim that the United States needs to maintain a presence in Iraq to watch Iran, Salih said Baghdad doesn't "want to be part of these conflicts. Iraq is still not a very stable country, and putting an extra political burden on it is unacceptable."

Iranian President Hassan Rouhani is set to visit Iraq March 11, the first such trip during his tenure. This was preceded by Salih visiting Tehran in November 2018.

These statements from the Sulaimaniyah Forum clearly indicate that Iraqi politicians are convinced about the need for their country to play the role of intermediary in the region more than ever before.

The policy of aligning with one axis against another is no longer the standard for Iraq's political forces, and the country's major components agree on the need to distance Iraq from regional conflicts. They are looking for working for the interest of Iraq with all conflicting parties, without getting involved in any conflict in the region.

Arab delegations at the Sulaimaniyah Forum, meanwhile, also seemed to be happy about Iraq’s new role. They prefer Iraq as a bridge between them and Iran instead of Iraq as an enemy inside Iran’s camp.

The economy is playing a major role in this new Iraqi policy. While Iraq cannot cut economic ties with Iran, Iraq's economy also cannot be sustainable without strong relations with its other neighbors, including the Arab countries and Turkey.