Parliament bill may not prevent US troops from staying in Iraq

Iraq is smack in the middle of a tug of war between the United States and Iran for influence in the Mideast and faces some tough decisions. 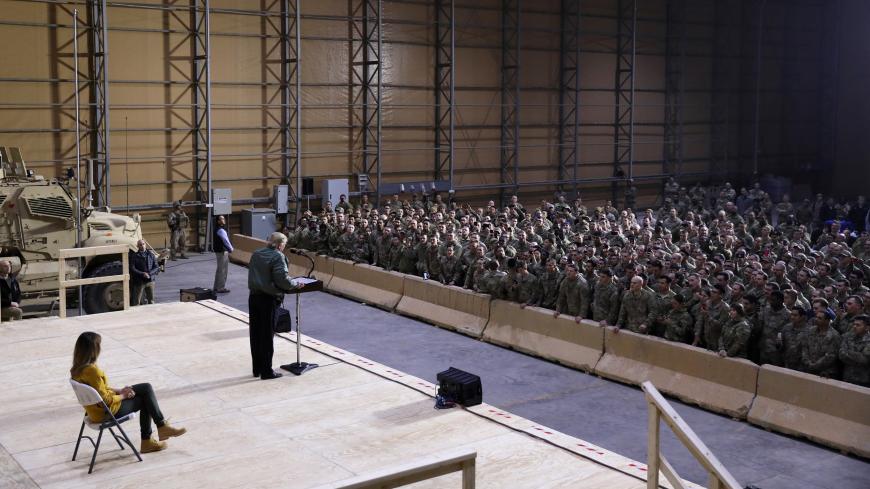 US President Donald Trump delivers remarks to US troops during an unannounced visit to al-Asad Air Base, Iraq, Dec. 26, 2018. - REUTERS/Jonathan Ernst 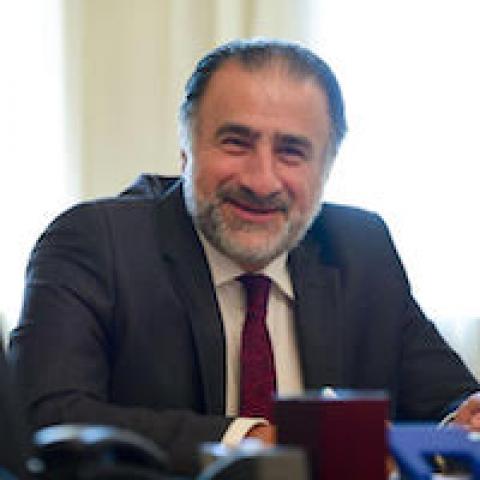 Even as Iraq struggles with the pros and cons of having US and other foreign troops within its borders, Iranian President Hassan Rouhani arrived March 11 in Baghdad for a three-day stay.

Rouhani, accompanied by a high-powered delegation from Tehran, began his trip by talking up the great relationship his country enjoys with Iraq and criticizing the United States and its sanctions against his country. This comes as some US officials attributed the United States’ presence in Iraq to being able to keep an eye on Iran and its efforts to expand its influence in the region.

At the annual Sulaimani Forum held March 6-7 in Iraqi Kurdistan, Iraqi President Barham Salih and Hikma movement leader Ammar al-Hakim both stressed that Prime Minister Adel Abdul Mahdi is responsible for determining conditions for the presence of coalition troops on Iraqi soil. Abdul Mahdi, however, has been saying little publicly about the subject. Even during a Feb. 27 consultative meeting of the president, prime minister, parliament speaker and political leaders at Salam Palace, the issue of troop withdrawal was the fifth item on the agenda and allotted little time for discussion.

A draft bill worked on jointly by the Sairoon and Fatah political blocs is expected to be introduced in parliament this week. The draft's main points address preventing any foreign power from setting up military bases in Iraq, while giving the Iraqi government a mandate to use foreign advisers or experts for training and capacity-building purposes. In other words, it would allow the government to ask for help — not just from American troops, but rather any combat troops — for instance, Turkish or Iranian ones.

The view of the topic in parliament differs widely from one political bloc to another. Fatah, led by Hadi al-Ameri, is in favor of the bill together with Sairoon, although their motivations vary. The State of Law coalition, led by former Prime Minister Nouri al-Maliki, also favors the bill. The Hikma movement has yet to declare its stance clearly. Kurdish and Sunni representatives will do all they can to keep the troops, in the form of an agreement. In other words, there is no consensus in parliament, which adds to the situation's uncertainty.

There is no clear path for Iraqi legislators or the executive branch to take. There are those who think a bilateral agreement between the Iraqi government and each country in the coalition, such as Spain, Britain and Italy, is the best approach. Signing such agreements would minimize pressure on Iraq's government and give it more flexibility to act in the face of criticism. Nonetheless, some countries might not agree to stay in Iraq if there is no US or NATO presence.

If the draft legislation goes through, the Iraqi government will be forced into a tough position.

Those who favor the draft bill understand that the United States is not in Iraq merely to fight the Islamic State (IS). The United States acknowledges it wants to control energy sources. Iraq's oil reserves, the fifth-largest in the world, could be a major source to counter Russia's dominance of the gas supply to Europe. This, the US power competition with Iran and Washington's desire to halt Tehran's expansion plans are all factors Iraqis associate with the US presence. Therefore they don't think the troops will be pulling out anytime soon if it is left up to US officials.

While US officials are telling their Iraqi counterparts that they need clarity on the matter, Iraqis often aren't clear on many of the issues, and this matter is very gray. Iraqi military leaders have it clear that they need the US air support, intelligence and training programs until Baghdad is able to get its own units in order and up to standard. Those factors will be reflected in any decision the Iraqi government makes. But as usual, the government is being quiet and doing its job diligently away from the media and certainly far away from Twitter.

US troops in Iraq, and even perhaps in Syria, are here to stay. The competition for dominance in the region is heating up, making it doubtful that the United States would leave in the middle of the great game: It wants to see the game through regardless of any election pledges made by US presidential candidates.

Iraqis need to be extra careful what they wish for, and consider what the alternative might be to the coalition of 72 countries helping Iraq. Given the status of Iraqi security forces, it's difficult to say Iraq has sufficient military and financial capacity to defend its borders and fight the remainder of IS without the air cover and strength provided by the United States and its coalition partners. The government needs to think long and hard about how it would fill the void.

There will likely be some amount of lead time, at least as far as the proposed legislation is concerned. The draft bill still faces many obstacles. Once it is introduced to parliament, the speaker can either send it to the government for comment, or forward it to the relevant committees, which are the Defense and Security Committee and the Legal Committee. Once it is in the committees, they will debate it and work on it for some time before making it into a unified draft law, which would be listed on the agenda for a first and second reading before there is a vote on it in its entirety. The government then would need to either agree to its implementation or appeal it to the federal court.