As Iranians uphold both religious values and national traditions, the Islamic Republic is beginning to recognize the once-rebuffed ancient Festival of Fire. 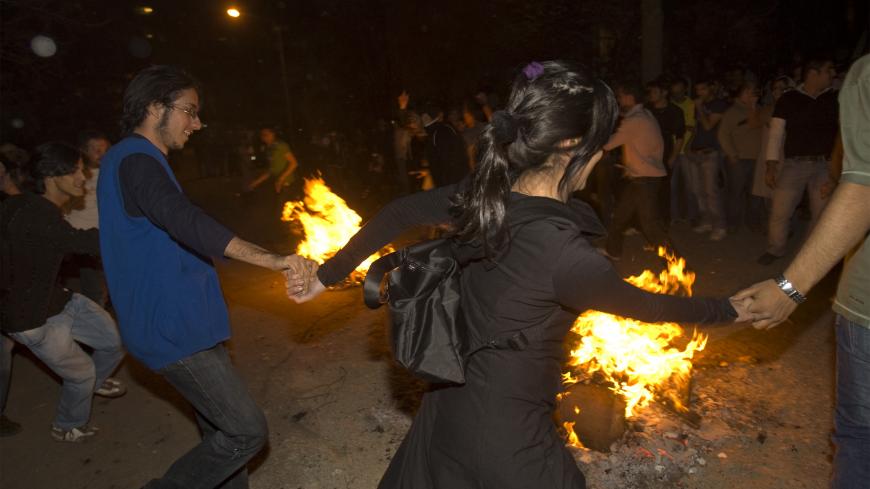 A woman dances with men during the Chaharshanbeh Soori festival in Tehran, March 18, 2008. - REUTERS/Raheb Homavandi (IRAN)

"[Chaharshanbeh Soori] not only lacks a religious basis, it also brings about harm and misdeed. It is advised that [the rituals] be refrained from." That's the text of a fatwa published by the official website of Iran's Supreme Leader Ayatollah Ali Khamenei in response to a religious query about Chaharshanbeh Soori, the ancient Iranian Festival of Fire held on the eve of the last Wednesday before Nowruz, the start of the Iranian New Year. The festival is largely marked with bonfires set up in alleyways and streets nationwide with people gathering around to jump over the flames and celebrate the arrival of spring.

The Iranian supreme leader's statement is not the sole opinion expressed by clerics and political figures within the Islamic Republic in rejection of Chaharshanbeh Soori. Since the 1979 Islamic Revolution, a number of religious figures have repeatedly dismissed the ceremony on the grounds that it runs counter to Islamic principles. They consider the celebrations to be a series of "superstitions" characterized by "religiously forbidden" customs. For instance, Morteza Motahari — a key ideologue of the Islamic Revolution — considered the popular epigram shouted when jumping over fires on the annual occasion as a manifestation of blasphemy and polytheism. "Jumping over the fire … bears signs of blasphemy. … Such slogans are descriptive of fire worshippers. Islam was introduced to battle these very rituals," Motahari wrote in one of his religious essays.

Meanwhile, foreign-based opposition groups such as Mujahedeen-e Khalq have issued calls ahead of the same festival to turn the event into political rallies against the Islamic Republic.

In recent years, however, the conservative clerical community's rejection has not managed to throw the festival into oblivion. Moreover, calls from the opposition for protests have not given the event a political color either. Days ahead of this year's Chaharshanbeh Soori, which falls on March 19, opposition groups have been launching campaigns across social media for organized rallies against the Islamic Republic. But the state is seemingly easing restrictions and exhibiting far less strictness about the ancient festival this year. To many pundits, this is partly explained by a gradual reemergence of patriotism and a strong emphasis on "Iran's glory" in remarks by the country's senior leadership.

In one such speech addressing a gathering of members of the hard-line volunteer Basij militia, Ayatollah Khamenei made a rare reference to nationalism as a top value. "The gist of my speech today is about putting Iran's glory first. Then comes the Islamic Republic's power, followed by [protecting] the insurmountable nature of the Iranian nation." For the first time ever, the Iranian leader seemed to be elevating the concept of the homeland in a highly patriotic sense, placing it above the Islamic Republic.

A historical and social study of Chahrshanbeh Soori leads to few clues as to where the origins of the festival were laid. Researchers are divided on whether the tradition came into being before or after the advent of Islam in Iran. There are even etymological differences over the roots of the word "Soor" in Persian, as it could signify both "celebration" and "ruddiness." But what has remained indisputably unchanged in the original ritual is the practice. Iranians have jumped over the flames for centuries, as they deem fire to be a sacred phenomenon that is capable of cleansing them of illnesses and evil. They repeat "Bestow upon me your ruddiness," the epigram to highlight the symbolic power of fire, as they jump over bonfires.

Abbas Abdi, a Tehran-based political activist and sociologist, contends that negative sensitivities toward the festival in the post-revolution era were rooted in the attitude that Chaharshanbeh Soori violated the ideals of the revolution and the principles of Islam. "The revolutionary and Islamic atmosphere back then had pushed Chaharshanbeh Soori to the corner. Anyone trying to celebrate the event would have to face hostile reactions from the public," Abdi told Al-Monitor. But he added that over time such a stance has been moderated with the society turning less "revolutionary and religious," offering more room for the restoration of ancient Iranian culture and traditions.

The recent shift in the Iranian leadership's stance toward Chaharshanbeh Soori, according to Abdi, is an outcome of the vehement denial of nationalistic sentiments in the aftermath of the revolution. "The shah’s regime sought to reinstate ancient and patriotic values by suppressing tendencies toward Islam, but the effort backfired," Abdi noted. On the very opposite side of the extreme, he said, the Islamic Revolution took a similar unsuccessful approach of rejection. He added, "In spite of the two approaches, ordinary Iranians still support a compromise between both nationalistic and Islamic values and even find bonds that link these two."

"The Evolution of Children's Names in Tehran from 1996 to 2015" is the title of sociological research conducted by Abdi and released in 2017. In it, he detects a growing inclination toward both Islamic and patriotic principles. "These days, parents tend to choose names that represent a mixture of nationalistic and religious elements, meaning that the two do not contradict one another," Abdi said. He argued that a denial of either nationalism or religiosity has proven to be met with public backlash. "People demonstrate more eagerness toward anything that the government propagates against," he noted.

Abdi also believes that employing Chaharshanbeh Soori for political purposes by opposition groups is in contrast with what the public generally pursues in the festival. He said, "People hold the celebrations and keep their own way, inattentive to the opposition’s calls for protests." Such moves, he maintains, are mainly aimed at highlighting certain developments that happen very rarely. Abdi added, "But let’s also not underestimate the fact that rituals like Chaharshanbeh Soori do always suffer a susceptibility to alterations and are subject to redefinition by political groups."

In post-revolution Iran, the ritual's content and form have both undergone changes. Passionate teenagers are no longer satisfied with bonfires alone. They have introduced a variety of firecrackers and tiny dynamites, modifying the ancient festival into a loud one. The nonstop, battle-zone-like sound of the small explosives has come to characterize the eve of the last Wednesday in recent years. The substantial deaths and injuries from the accidents caused by the fireworks have now fueled concerns about citizen safety.

"Given the harm inflicted upon citizens, what happens during Chaharshanbeh Soori is forbidden from a religious point of view," said ultraconservative cleric Mohammad Khatami in sermons addressing Friday prayer worshippers in March 2014.

Three days after the speech, however, the social affairs department chief at the Islamic Republic Police expressed support for the ritual, promising that the force will "vigilantly stand by the people as always during the event and the entire New Year holidays."

Last year's festival resulted in at least four deaths and 2,082 injuries — 23 were left permanently maimed. Some 160 building blazes were also reported nationwide. Still, the casualty figures marked an overall 50% decline in the capital city of Tehran compared to the previous year.

In a March 9 statement, days ahead of this year's festival, the Iranian Police asserted that it has no intention of standing in the way of the public’s joy and celebration, but it urged the nation not to turn the Festival of Fire into a "festival of damage and burns." "People have every right to observe traditions, but the red line needs to be observed as well," the statement read. It also warned that "police will not tolerate any move that disrupts public order and irritates fellow citizens," promising to "severely deal" with those who cause injuries to individuals and inflict damage upon public property. 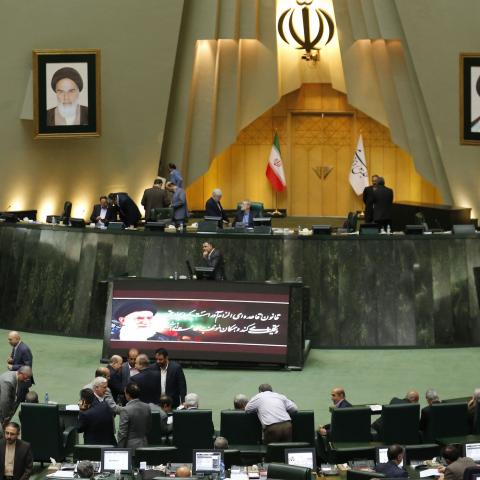