Iranians will take to the streets to celebrate an ancient Iranian holiday, despite warnings by officials who are uncomfortable with this pre-Islamic holiday. 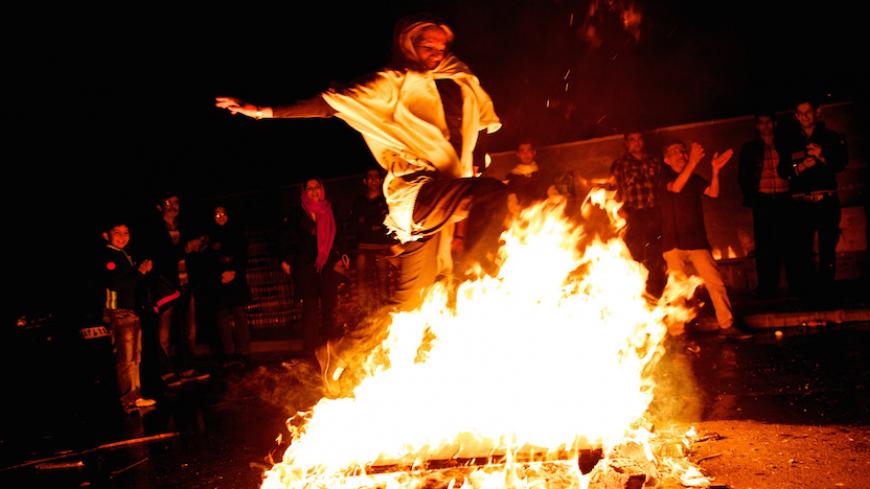 An Iranian woman jumps over a bonfire in southern Tehran on March 19, 2013, during the Wednesday Fire feast, or Chaharshanbe Suri. - BEHROUZ MEHRI/AFP/Getty Images

Once again, the ancient Iranian festival Chaharshanbe Suri, the eve of the last Wednesday before the Iranian new year, was preceded by strong warnings from police and high-ranking officials. But the early celebrations and sound of firecrackers over the last week or so in the streets of Tehran and other large cities indicate people's intention to keep the festival alive.

On March 1, Taghi Mehri, head of the Tehran police's Prevention Unit, announced a prohibition of marking Chaharshanbe Suri. "Just like past years, police will take legal actions against those who bother people or block main streets," he said.

Chaharshanbe Suri translates into "Wednesday fire." Traditionally, Iranians, especially the youth, make bonfires in alleys and streets and jump over them. The act is meant to cross a threshold symbolically from sickness to health, as many will recite the verse, “Give me your beautiful red color, take back my sickly pallor,” as they jump over the fire.

Iran's conservative and extremist parties, though, have constantly announced their objection to the festival since the 1979 revolution.

Besides Mehri, other high-ranking police officials have threatened people about attending the festival. Fars Police Chief Ahmad Ali Goudarzi warned: "On the last Wednesday of the year, we take legal actions against those who disturb people's comfort, we arrest the offenders and keep them in special places till April 4 [after Nowruz holidays]." Goudarzi did not explain these "special places" but apparently it means the people arrested will be kept in a bad situation. Alborz Police Chief Bakhshali Kamrani Saleh said, "Those who misuse this opportunity to disturb public order will be stopped."

Kourosh Zaeim, spokesman of the old opposition party Iran National Front, told Al-Monitor that prohibition of Chaharshanbe Suri is an outcome of a general trend that opposes national ceremonies. "From the beginning, the Islamic Republic opposed and prohibited all Iranian ceremonies and rituals," Zaeim said. "They even opposed Nowruz and tried to replace it with Eid al-Fitr (Muslims' religious feast at the end of Ramadan)."

He added that authorities consider Chaharshanbe Suri to be fire worship. "It was obvious that they were extremely ideologist [after the revolution]. They did not consider themselves Iranians and sought customs of another culture," Zaeim said. "Today, after three decades of resistance by Iranians, the Islamic Republic has stopped explicit opposition against Iranian rituals, but still makes excuses to prevent cultural happiness."

In recent years, the youth has used explosives and firecrackers for Chaharshanbe Suri. The main reason made by police to oppose the festival is that fireworks are dangerous.

Many high-level conservative clerics in Qom have expressed their religious objection to Chaharshanbe Suri.

Ayatollah Nouri Hamedani expressed a similar opinion, saying in 2010, "Chaharshanbe Suri is an example of superstition and what people do in this day disturbs public comfort and, therefore, [attending it] is haram."

Tehran's temporary Friday prayer leader and Assembly of Experts member Ayatollah Ahmad Khatami argues that "enemies" have played a significant role in highlighting the festival: "Enemies try to show that national symbols outweigh religious expressions, in an attempt to weaken religion in society. They highlight Chaharshanbe Suri, Nowruz, etc. to achieve this goal."

But most religious intellectuals and moderate clerics do not see it religiously wrong to attend the Chaharshanbe Suri festival.

Mohsen Kadivar, a religious dissident and a visiting professor of religious studies at Duke University, told Al-Monitor, "Rituals gradually change their identities over time. Perhaps some rituals have had special meanings in ancient days, but they might be pure cultural issues now. Currently, Chaharshanbe Suri and jumping over fire are stripped of their ritual meanings. They are leisure activities in a national level. Therefore, they are not religiously haram."

Ali Akbar Mahdi, a sociology professor at California State University, Northridge, explained to Al-Monitor that extremist Muslims oppose Chaharshanbe Suri "on an ideological ground, this tradition belongs to Zoroastrian religion — a religion which was challenged by Islam in the seventh century. The Islamic Republic has declared Iran an 'Islamic country,' emphasizing its post-Zoroastrian history and Shiite identity."

Mahdi argues that Chaharshanbe Suri as a “quiet political war between the clerics and the public: the more clerics reject the Iranian pre-Islamic traditions, the more Iranian public resort to their revival as a form of resistance. That is why you see an intensification of this practice as the Islamic Republic has progressed."

The state pressure to prevent people's gathering on Chaharshanbe Suri augmented after 2009 street demonstrations. The pressure was increased especially after Mir-Hossein Mousavi's 2010 announcement in which he supported Chaharshanbe Suri and explained it as "feast of light against darkness."

Zahra Rahnavard, his wife and a Green Movement leader, said citizens will cherish the memory of those killed in street demonstrations and avoid any violence.

At the same time, conservative media published a fatwa on Chaharshanbe Suri issued by the supreme leader, Ayatollah Ali Khamenei, "In addition to having no religious ground, it causes a lot of losses and harms which are desirable to be avoided."

"Fearing public rebellion," he said, "the Islamic Republic prevents any form of public gathering, even shooting water at each other in parks. An event such as Chaharshanbe Suri, with making bonfires in streets and sound of firecrackers and fireworks, frightens the leadership.

"When a nation does not accept the leadership, such preventive and security measures are expectable."