President Hassan Rouhani is under fire for failing to visit areas hit hard by deadly floods that have marred Nowruz vacations for many Iranians. 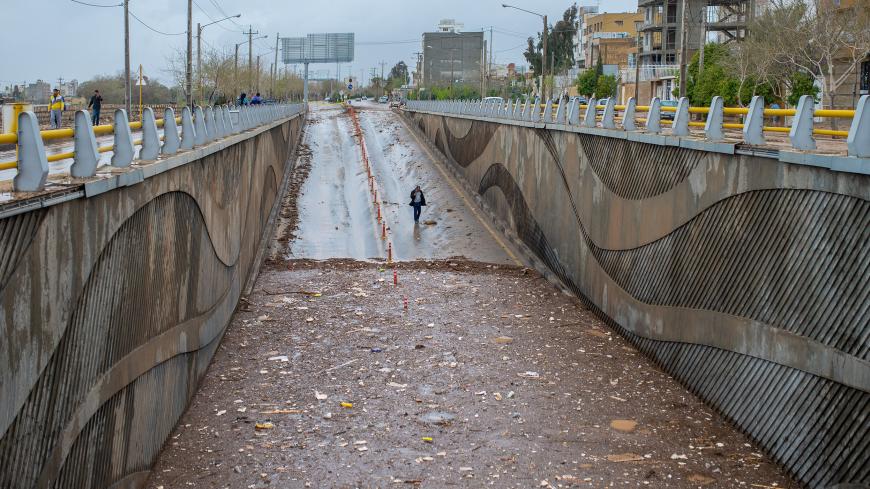 A man walks near a tunnel filled with water after a flash flooding in Shiraz, Iran, March 26, 2019. - Tasnim News Agency/via REUTERS

A trail of death and destruction left behind by heavy downpours in Iran's north and south has cast a dark shadow over Nowruz this year. The Iranian New Year — which began March 21 — characterized by celebrations, family visits and holiday trips has so far been but a mess for many who had planned it months ahead.

The government says it has been mobilizing all facilities to adequately respond to the disaster, but that does not seem to have appeased many critics. President Hassan Rouhani has come under immense pressure for failing to visit the inundated areas. "After the deadly collapse of the coal mine in Azadshahr [in 2017], Rouhani visited the site as part of his ridiculous election campaign [to garner votes]. But now floods have hit the same province and he is gone," one person tweeted.

State media reported that Rouhani attended a crisis management meeting in the capital city of Tehran March 26 where he made promises of quick relief while also criticizing those who "level accusations and disappoint the public" on social media platforms. The president was apparently back from a holiday on the southern Qeshm island in the Persian Gulf. It was unclear whether he had cut his stay short.

Speculation was growing about Rouhani's whereabouts as the floods first hit, with ordinary Iranians grappling with one of the worst natural disasters in the country in recent years. Many expressed their anger with a Persian hashtag translated as "Where is Rouhani?" with some even calling on him to resign. "Mr. Rouhani, you better submit your resignation from wherever you are. Your appearance will only open up people's wounds," read another tweet.

Some also brought up the idea that the president could have at least returned to the capital to lead the response teams if not visiting the flood-stricken provinces. In a public letter, Mohammad Ali Vakili, a member of the presiding board of the Iranian parliament, urged Rouhani to fly back and direct the Crisis Management Headquarters, which he described as a failing organization "in dire need of fundamental reform."

A national debate has now resurfaced on what is believed to be the country's weak crisis disaster control, from forecast to relief, rescue and post-disaster operations. The disorder in management was seen in the aftermath of the 2017 devastating tremor that rocked the country's impoverished west, where scores of people affected by the quake are still living in tents and makeshift metal structures. A recent comment by the head of the Crisis Management Organization also sparked outrage after he complained that his teams had been "caught by surprise" following heavy snows that crippled several Iranian provinces in January.

The same organization is now sending mass messages via cellphones, giving important tips to travelers in the harsh weather conditions. But this has also been met with fury, as many Iranians believe the warnings have come too late and should have been issued before the recent flooding so that lives would not have been lost.

After a yearslong period of widespread drought, Iran is now believed to be on the path of considerable precipitation. But sudden downpours have caught many off guard. While Iranians are coping with skyrocketing prices blamed on reinstated US sanctions as well as profiteering and mismanagement, the untamed floods have also fueled immediate economic worries. People are now anticipating a fresh wave of inflation — especially in the food sector. The argument is based on the fact that the disaster-hit areas are major farmlands and leading suppliers of Iranian produce ranging from vegetables and fruits to vital crops like wheat and barley. "Onions were already being sold for 12,000 tomans [$2.85]. Now with the floods in Shiraz, the worst has yet to come," read a Twitter post.