When a female university student fell to her death from an office tower in May 2018, police were initially inclined to believe her male hosts' version of the story, but a trial has brought to light new evidence against the men. 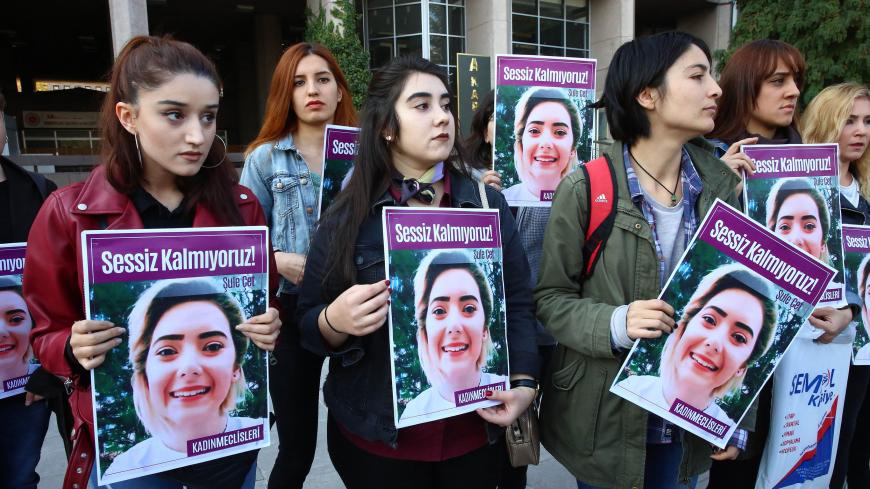 Women protest before the trial regarding the death of Sule Cet, who was allegedly killed by being thrown off the 20th floor of a luxury building in Ankara, Turkey, Nov. 8, 2018. - ADEM ALTAN/AFP/Getty Images

ANKARA, Turkey — One night in May 2018 two men dined with a female university student who had worked for them part-time as a cashier. Afterward they invited her for drinks in one of Ankara’s distinctive office towers.

She agreed, and photographs taken with one of the men’s cellphones show her drinking a bottle of beer in an office on the 20th floor, the lights of the city shining through the window. She appears to be happy.

Sometime later the guards in the ground-floor reception of the Yelken Plaza heard a loud bang. A security video shows it startled them. They asked each other what happened. The time was 3:50 a.m. What they had heard came from a first-floor terrace, a few meters above their heads. The bang was the sound of the young woman hitting concrete after a fall of 66 meters.

The two men are now standing trial in the Turkish capital, charged with detaining Sule Cet (pronounced Shule Chet), 23, against her will, raping and murdering her. Prosecutors have asked for a life sentence for murder and a total of 39 years imprisonment on the lesser charges.

The men — Cagatay Aksu, 34, and Berk Akand, 35, both businessmen — deny all charges. Their defense is that Cet threw herself out the window, with Aksu trying to pull her back in, tearing the tendons in his arm in the process.

The death of Cet has become a cause celebre. Scores of female activists held posters of her face outside the Palace of Justice when the trial began earlier this month. Representatives of the ruling Justice and Development Party and the opposition parties asked the judge to accept them as “parties to the case.” The judge refused, but he did grant such status to the Ministry of Family and Social Policy.

Social media users are making heavy use of the hashtag #SuleCetIcinAdalet (Justice for Sule Cet). Aksu and Akand are effectively on trial in two places: Criminal Court 31 and the court of public opinion.

Ozden Oz of the We Will Stop Femicide Platform (Kadin Cinayetlerini Durduracagiz Platformu) told Al-Monitor that 440 women were killed by men in Turkey in 2018, and 409 women were killed in 2017. “This case symbolizes the terrible face of femicide in Turkey,” Oz said.

The defendants deny killing Cet. On the first and only day of the trial so far, they persuaded the judge to refer to the death as the “falling incident.” Very quickly somebody tweeted: “It is not a falling death. It is femicide.”

Aksu told the police that while he was tidying up the office, preparing to leave, and Akand was dozing in a chair, he noticed Cet go into another room. Moments later Aksu entered the room to find Cet halfway out the window, shouting, “I don’t want to live anymore.” He tried to stop her, grabbing her ankle, but failed.

Akand told the police he did not hear Aksu shout for help to pull Cet inside, as he was sleepy and loud music was playing.

Initially the police accepted their version of events. The prosecutor closed the case as a suicide. But Cet’s family did not believe that Sule was suicidal.

Then the first of four forensic reports arrived. It found Cet’s vagina and anus had been torn and bruised, and her vagina contained saliva and PSA, a protein released by the penis. Unfortunately, the PSA and saliva were not found in concentrations sufficient to allow for DNA testing.

But DNA testing could be conducted on Cet’s fingernails, and the third and fourth fingers of her right hand bore Akand’s DNA.

A friend of Cet’s came forward with a text message that Sule sent her from the office. It said: “I can’t get out of here. This man doesn’t let me go. He is obsessed with me.”

A third piece of evidence made the prosecutors think again. The police obtained security camera footage from the lobby of the 20th floor. The video, which Al-Monitor has seen, shows the accused leaving the office after Cet’s death.

As soon as he enters the lobby, Akand crouches down on the floor. When Aksu enters, Akand rises and walks unsteadily to the elevator, where he presses the button to summon the elevator. Akand then buries his face in his hands, apparently overcome by emotion. He remonstrates with Aksu, shaking his right hand as if to say “Why?”

Aksu, whose back is to the camera, appears to be calm. He is smoking a cigarette, but Akand seems to be in severe shock.

The video shows that the accused left the office at 4:08 a.m., 18 minutes after Cet’s body hit the terrace.

What the two men did during those 18 minutes is a mystery. The indictment states that after Aksu told Akand of Cet’s suicide, they had an argument and Akand punched Aksu. The indictment accuses them of tampering with evidence, washing the drinking glasses and cleaning the window frame of fingerprints.

Aksu denies this, but Akand says the glasses were washed. The two men have fallen out. They have engaged different lawyers. Both are in jail.

What is clear about those 18 minutes is that neither man dialed 155, the emergency number in Turkey. A human rights lawyer who is following the case, Gunal Kursun, told Al-Monitor: “If something bad has happened, I expect a normal human being to call immediately the police or ambulance, or at least call somebody, but they didn’t.”

The lawyer for Aksu, Levent Ekmen, told Al-Monitor the court had not yet asked the accused why they didn’t call 155.

Eventually the guards at reception called the police. The fire brigade brought a ladder that enabled them to reach the first-floor terrace. Cet’s body was found clothed, but with her socks and shoes removed. Strangely, the tip of one shoe was under her right arm. Umur Yildirim, the Cet family's lawyer, told Al-Monitor this shows that her shoes were thrown out before her body.

Mehmet Akif, a guard, told the police that when Aksu and Akand were leaving the building, he asked them where the young woman was. Both replied to the effect: “She has gone. Didn’t you see her go?”

If the guard is telling the truth, the conversation would have been unreal. Aksu had told Akand that Cet had jumped out the window and, minutes later, they are telling the reception that Cet had left in the normal way.

The trial has been adjourned to May 15. The three judges, one of whom is a woman, face several other issues that may be difficult to reconcile.

For instance, Aksu’s lawyer, Ekmen, pointed to fact that although the prosecution alleges rape, no sperm was found in Cet. He told the court that since PSA and saliva could survive in the vagina for seven days, it was possible that any traces belonged to an earlier sexual encounter. Cet’s “hymen was broken” before the day of her death, he said.

The comment generated outrage. It was seen as Ekmen trying to mobilize public opinion against Cet. Three days later, Ekmen issued a statement to the press, saying he had merely “repeated sentences” in the forensic reports.

His statement showed he was well aware of how large numbers of Turks would view Cet’s behavior. “Sule Cet’s virginity, her drinking alcohol — with whom, where and at what time — is neither the subject of the trial nor the business of anybody else,” Ekmen said in the press statement.

Ekmen spoke with Al-Monitor at length, saying he despaired of the “trial by media” that was underway. “Our demand is the case must be decided by an objective court,” he said.

Yildirim, for the Cet family, was equally generous in giving time to Al-Monitor, but he sees the media as a vital ally in his campaign to overturn a perceived bias toward men in Turkey’s judicial system. “We are going to win this case by telling people what has happened,” he said. “If it were not for that, they would have closed this case.”