The Donald Trump administration does not plan to provide Congress with a certification allowing US involvement in Yemen, barring the Pentagon from providing refueling again. 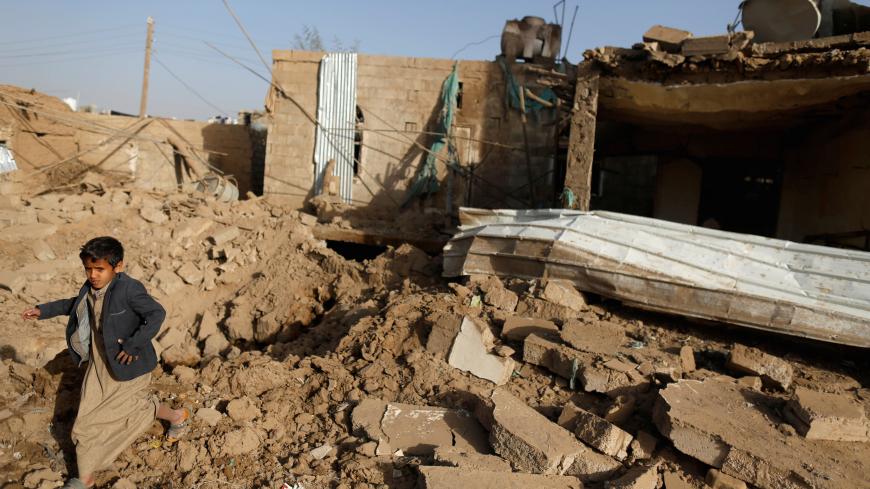 A boy walks at the site of a Saudi-led airstrike in the Houthi-held capital, Sanaa, Yemen, Jan. 20, 2019. - REUTERS/Khaled Abdullah

The Donald Trump administration won’t certify to Congress that the Saudi-led force fighting in Yemen is attempting to reduce civilian deaths in the conflict, Al-Monitor has learned, a move that would bar the Pentagon from resuming refueling to the coalition.

The decision, which had been due Feb. 9, is required by last year’s defense authorization bill but does not prevent the Pentagon from providing intelligence to Saudi Arabia and the United Arab Emirates.

The State Department first certified that the Saudi-led coalition had made a “good faith effort” to reduce civilian casualties in the four-year conflict in September in order to continue refueling. The move angered Congress just a month after a US-supplied bomb struck a Yemeni school bus far from the battlefield, killing 40 children.

“They halted refueling in 2018 in vain attempt to deflect support from war powers in the Senate. It didn’t work,” a former US official told Al-Monitor. “They can read the writing on the wall. Submit this certification again, and Congress will take you to the woodshed.”

This time around, the administration has blown through the Feb. 9 deadline to issue a follow-up certification detailing “demonstrable actions” taken by the Saudis and the United Arab Emirates to reduce harm to civilians and damage to civilian infrastructure. In a letter sent to Secretary of State Mike Pompeo last week, the drafters of the certification language, Sens. Jeanne Shaheen, D-N.H., and Todd Young, R-Ind., urged the administration to use the new deadline to “succinctly demonstrate” to the Saudis and their allies that Congress and the American people “will not stand for the continued disregard of the security and humanitarian interests of the US.”

Frustration on Capitol Hill over the White House’s support to Saudi Arabia in Yemen has only intensified following the October murder of journalist Jamal Khashoggi. The White House failed to meet a congressional deadline to answer on potential Saudi culpability in the Washington Post contributor’s death last week, angering both Republicans and Democrats.

Failing to issue a new Yemen certification would “make it twice in one week that the administration has ignored what is required by law,” said Kate Kizer, the policy director for Win Without War, an alliance of activist groups pushing the United States to withdraw military support in Yemen. “That’s sure to inflame tensions with Congress and drive further action.”

In lieu of a fresh certification, the US administration appears to be taking a personal approach to dealing with Congress. A US official told Al-Monitor that Deputy Assistant Secretary for Arabian Peninsula Affairs Timothy Lenderking briefed the House Foreign Affairs Committee in a classified session on US involvement in the conflict last week.

Speaking at an event in Washington in October, Lenderking said the Saudis and the United Arab Emirates were “just above a passing grade” on preventing innocent deaths. The Wall Street Journal reported in September that Pompeo overruled concerns inside the State Department to renew US support for the Saudi-led war.

At the event, Lenderking said the United States supported the Saudi-led campaign in order to force the Iran-backed Houthis to the negotiating table. “I don’t want us to find ourselves again here in a year saying, where is that political process?” he added. Saudi Arabia took refueling for the conflict against the Iran-backed Houthis into its own hands in November.

The United Nations has described the war as the world’s worst humanitarian emergency, with 10 million people on the brink of famine. Yet efforts to shore up a shaky cease-fire deal struck in Sweden late last year still appear elusive. On Tuesday, Yemeni President Abed Rabbo Mansour Hadi said he would not take part in new talks until the December deal was fully implemented.

Pompeo met with the so-called Yemen quad group on the sidelines of his Middle East conference in Warsaw today. The group includes the United States, the United Kingdom, the UAE and Saudi Arabia, as well as a Yemeni delegation.

The fallout over Yemen threatens to set back relations with Saudi Arabia, once seen by the Trump administration as the Gulf linchpin of an Arab-Israeli peace deal and US-backed reconstruction plans in northeastern Syria. House lawmakers passed another war powers resolution that seeks to cut off US support for the conflict today.

Experts say the Trump administration’s silence on Saudi Arabia since the beginning of the year, after top US officials defended Riyadh despite Khashoggi’s killing, indicates that the White House is no longer willing to risk support within the Republican Party over the relationship.

“It’s been radio silence,” said Scott Anderson, a former State Department official during the Barack Obama administration. “My sense is that the administration is trying not to talk about their relationship with Saudi anymore. They don’t want to spend the political capital or risk upsetting members of their own party.”