Pompeo’s remarks ignite vote of no confidence in AUC president

The American University in Cairo hosted Jan. 10 US Secretary of State Mike Pompeo, which ignited an internal crisis between its president, the senate and Board of Trustees, particularly since the faculty have been voicing complaints about the president’s measures and decisions. 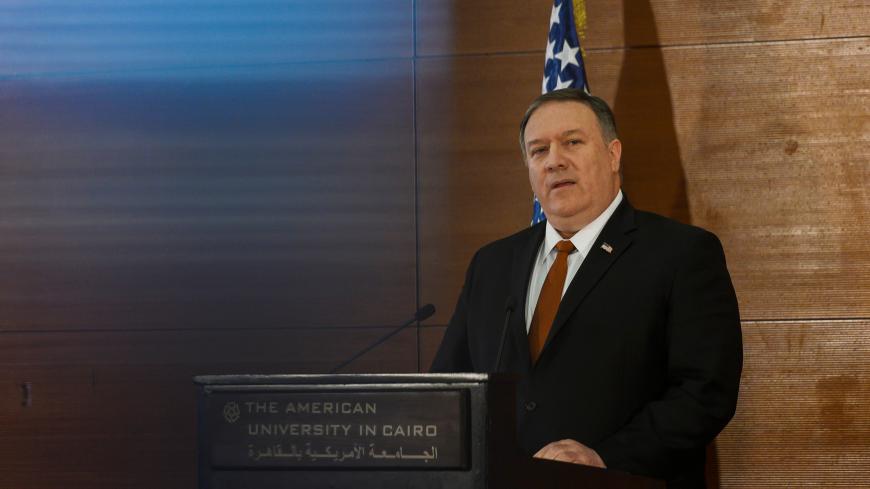 US Secretary of State Mike Pompeo speaks to students at the American University in Cairo, Egypt, Jan. 10, 2019. - Andrew Caballero-Reynolds/Pool via REUTERS

The senate of the American University in Cairo (AUC), which consists of representatives of the faculty, staff, students and administration, issued Feb. 5 a vote of no confidence in AUC President Francis J. Ricciardone with 80% of the votes.

Nevertheless, the Board of Trustees whose decisions are binding refused to approve the voting results at its Feb. 11 meeting and with one mind renewed confidence in Ricciardone as the sole decision-maker at AUC until the end of his four-year term that started in October 2016. The board perceived Ricciardone’s decisions and leadership to be “substantial” for the university's success at present and in the future. Based on that, an acute crisis was triggered.

The decision to withdraw confidence from Ricciardone, a former US ambassador to Egypt, stems from AUC hosting Jan. 10 US Secretary of State Mike Pompeo. One of the university halls was made available to the US Embassy to organize Pompeo’s press conference, without consulting with the various components at AUC, said faculty members in their Feb. 5 statement, which Al-Monitor received a copy of.

The Board of Trustees, which mostly consists of Egyptian and non-Egyptian businessmen, “approves AUC’s mission and vision, budgets, campus plans and policy changes. Board of Trustees members supervise the University’s endowment and serve without compensation. The board also appoints the AUC president.”

Hafez al-Mirazi, a professor of practice at the Department of Journalism and Mass Communication, told Al-Monitor over the phone that Pompeo’s discourse has been conclusive in the decision to withdraw confidence from Ricciardone. He indicated that most of the complaints about Ricciardone affirm that he does not abide by any of the professors’ recommendations and proposals, and that he deals with them as employees at his embassy. In addition, he kept quiet all of the arrangements for Pompeo’s visit for two weeks.

Mirazi, who voted in favor of withdrawing confidence from the AUC president at the senate meeting, believes that the problem lies in organizing Pompeo’s lecture without communicating with the working community, including members of the university senate. He said, “The Board of Trustees’ refusal to approve the senate’s decision goes against the values of a liberal education that AUC promotes. [Such a decision] would be detrimental to [AUC’s] interests and stability, and to the quality of the education it offers.”

On Feb. 5, the AUC Students’ Union wrote a Facebook post endorsing the senate’s decision to withdraw confidence from Ricciardone. “The current administration has proved its inability to cope with the faculty and students' needs, and accordingly must either change its actions or the administration must be changed.”

Speaking to Al-Monitor over the phone, Pascale Ghazaleh, chair of the History Department, said, “Ricciardone deals with AUC as being annexed to the US Embassy and as an affiliated business, subjugating everything about it to the profit-loss calculations and dealing with its professors in a patronizing way. Pompeo’s visit caught the faculty and senate’s members by surprise as it was organized without their knowledge."

Ghazaleh addressed Ricciardone Jan. 13 in a Facebook post, saying, “Were any of the members of our community consulted as to whether it was a good idea to bring a former CIA director who has spoken in favor of torture to AUC?”

She added, “An invitation on behalf of the working community was delivered to Pompeo without said community’s knowledge in the first place.”

Speaking to Al-Monitor over the phone, Rehab Saad, director of media relations at AUC, said that under the AUC’s rules and regulations, the university’s senate makes “nonbinding” recommendations, noting that AUC respects the professors’ opinions and that more than one meeting will be held between Ricciardone and AUC professors.

She added that the hall where Pompeo was hosted does not accommodate more than 200 people. Based on that, the AUC’s administration did not have the chance to invite all of the faculty members. Saad explained that in addition, the AUC administration was required to comply with security measures, only allowing the circulation of information about the visit shortly before it took place. She affirmed that the AUC’s commitment to the principle of freedom of speech is behind hosting guests.

Commenting on whether or not the Board of Trustees’ decision would exacerbate the crisis, she said, “Medium solutions will be reached through dialogue, which is a well-established tradition at the university.”

AUC Provost Ehab Abdel-Rahman told Al-Monitor over the phone that “freedom and critical thinking are sacred in the eyes of the university’s administration and are espoused in the education process.”

He explained that the AUC administration is entrusted with the wider role of hearing the faculty’s voice and sharing with them all of the facts they could have missed.

Abdel-Rahman justified the faculty’s criticism, saying, “We are constantly keeping pace with the academic advancement via policies that would render the university more independent. The academic aspect is a prime concern for us and takes priority over the financial profits to ensure [the AUC's] survival in the long run.”

He noted that it is “a healthy matter” to see faculty members and the Board of Trustees voicing different views, concluding, “What happened underlines that we are in an academic community that clings to the importance of difference.”