While the Palestinians boycotted the meeting in Poland, a number of Arab delegates showed an interest in engaging with US plans for the Israeli-Palestinian conflict. 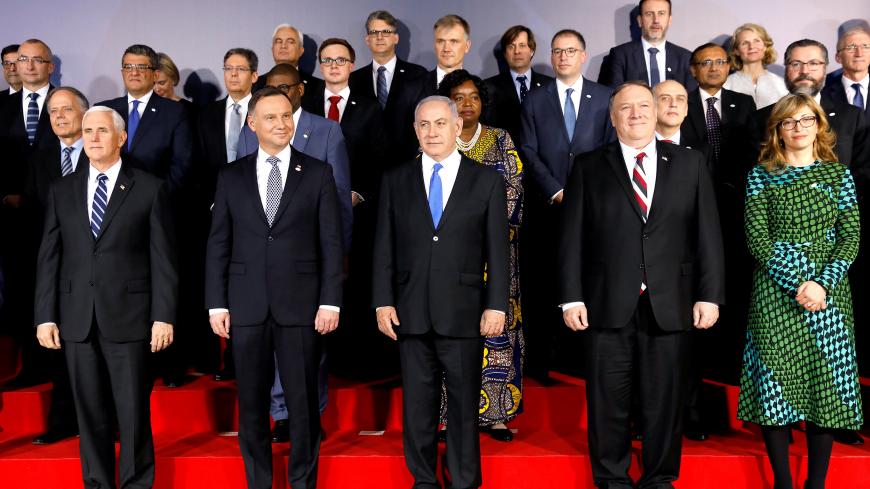 WASHINGTON — If the Warsaw conference that wrapped up today only seemed to amplify differences between Donald Trump administration officials and their European allies regarding Iran, one attendee displayed high satisfaction with the event: Israeli Prime Minister Benjamin Netanyahu.

Veteran US peace negotiator Dennis Ross says he moderated a panel of three Arab foreign ministers at a closed-door dinner in Warsaw on Wednesday night. That was then immediately followed by Ross interviewing the Israeli prime minister, who is running for re-election in April.

“Apparently, there was a decision to have some outside people come as moderators,” Ross told Al-Monitor by email today.

“I was asked to moderate a panel of Arab ministers for the opening night and then following that discussion to interview Prime Minister Netanyahu,” Ross, now with the Washington Institute for Near East Policy, said. “The focus was, as you might imagine, largely on Iran.”

Ross described his role at the US-Polish co-hosted conference to Al-Monitor after tweeting observations that warned the Palestinian Authority (PA), which skipped the Warsaw meeting, could find itself left behind.

“The PA may not like it, but Arab states will pursue their interests even when the Palestinian leadership opposes,” Ross wrote on Twitter. “Case in point: the Warsaw Conference. Arab states had more of an interest in arguing for unity of effort against Iran than boycotting a conference the PA opposed.”

“At the Warsaw Conference, I conducted back to back discussions first with three Arab ministers and then with Israeli PM Netanyahu,” Ross tweeted. “Same room, same views of Iran’s aggressive, threatening posture in the Middle East, and unmistakable convergence of what should be done to counter it.”

Bahrain’s foreign minister “can be heard blasting Iran as a ‘toxic party,’” Haaretz reported on the since-deleted video of the dinner discussion in Warsaw, further quoting him as saying, "If it wasn't for the toxic party … guns and food soldiers of the Islamic Republic, I think we would have been much closer today in solving this issue with Israel."

“Amazing to be sitting [within] a few feet of the [foreign ministers of] Yemen, Qatar, Oman, UAE, Bahrain & @Netanyahu (others in region here too) having open/honest talk about the numerous regional challenges,” Trump peace envoy Jason Greenblatt tweeted. “Under @POTUS we have a chance to solve these issues. We must work on these various challenges.”

Aaron David Miller, who long served as a US Middle East peace negotiator, said the increasingly open convening of Israeli and Arab officials in the same room in Warsaw made more clear a regional transformation that has been underway.

“Look, the prime minister of Israel had dinner in a private session with … a number of Arab foreign ministers,” Miller, now with the Woodrow Wilson Center, told Al-Monitor. “He met with [Omani Foreign Minister] Yusuf bin Alawi [in Warsaw]. He has [recently] seen [Omani Sultan] Qaboos.”

“My take away from this … what is so stunning, so preternaturally amazing, is that at a time when there is no peace process and no prospect of one, and there is one of the most right-wing governments in Israeli history, and the [Trump] administration is waging a political and economic war against the Palestinians, Israel’s stock in the region and in the international community is higher now than at any point since the state was created,” Miller said. He attributed the change to a combination of regional exhaustion, fatigue with the Palestinian issue and the jihadi and Iranian threat.

“To me, what is so stunning about Warsaw is what it says about the change in regional dynamics,” he said. “What it doesn’t show in my judgment is that the Arabs are now inclined to forget about the Palestinian issue.”

“At the dinner last night, Arab and Israeli leaders gathered in the same room to talk about deeply common and shared interest,” Pompeo said in a press availability with Polish Foreign Minister Jacek Czaputowicz at the close of the meeting today.

“It’s undeniable that Iran’s aggression in the region has brought Israel and Arab states closer together,” Pompeo said. “What I think was even more remarkable is that it didn’t feel all that historic. It felt right, it felt normal, because we were working on a common problem.”